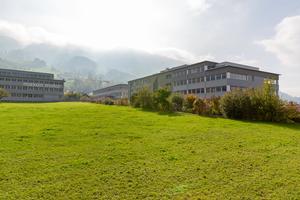 The drive specialist is focusing its competences.

After two years of construction, maxon motor ag opened its new Innovation Center at the headquarters in Sachseln, Switzerland. This new innovation center will house the production of microdrives for the medical technology industry. The drive specialist is also taking a look back at its storied past with the release of a new book.

Swiss drive specialist maxon motor is adding another chapter to its ongoing success story: On Friday, November 9, 2018, the new Innovation Center opened at the company‘s headquarters in Sachseln, Switzerland. The new building will provide an environment for the focused collaboration of various research and development departments. The six-story building also offers space for the significantly expanded production of microdrives for use in medical technology. These drives are used in insulin pumps, medication delivery systems, or surgical robots. In order to fulfill the highest quality standards, maxon is integrating state-of-the-art cleanrooms into its production. With these expansions and upgrades, maxon is ready for future growth.

More than 1200 employees currently work at the maxon headquarters. The new Innovation Center is the fifth building at the site, and it will be connected to the other buildings via footbridges. The new building consists of two basement levels for parking and technical facilities, two production levels, and two office floors. A solar panel system on the rooftop will provide up to 180 megawatt-hours of energy every year. The environment is complemented by trees, bushes, and a biotope.

The Innovation Center cost approximately CHF 30 million and represents an important part of maxon's growth strategy. “With this step, we are strengthening our Swiss headquarters and our ability to focus even more on individual markets worldwide,” says maxon CEO Eugen Elmiger. The measures include establishing a global R&D team and continuous expansion of the eight production sites. With more than 2600 employees worldwide, the company is set to focus on complete drive systems and their integration into a wide variety of applications

From the Earth's core to the surface of Mars

The history of maxon motor ag

In time for the grand opening of its Innovation Center, maxon released the new German book “Vom Erdkern zum Mars  – Die Geschichte der maxon motor ag, Sachseln” (From the Earth's Core to the Surface of Mars – the History of maxon motor ag, Sachseln). The book, written by Obwalden-born Andreas Anderhalden, explores the success story of the company, which is owned by the Braun family. It starts off with the founding of Interelectric, the precursor to today's maxon motor ag. It goes on to talk about the people and other factors that contributed to the development of the high-tech motors and their global success. The book highlights the history of maxon motor and offers exciting stories about maxon motor told by Andreas Anderhalden.