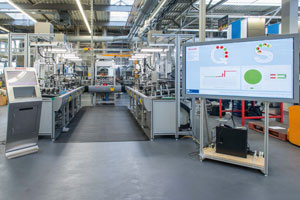 A new assembly line at Bosch Rexroth AG in Homburg/Saar, Germany, was recognized with the “Industry 4.0 Award” as a pioneer in the practical implementation of Industry 4.0. The prize was awarded by the trade journal Produktion along with ROI Management Consulting AG. The independent panel evaluated the assembly line, which was commissioned in the middle of 2014, to be the best implementation of Industry 4.0 in production.

“The solution implemented by Bosch Rexroth is exemplary of the potential of Industry 4.0: holistic and cost-efficient implementation has led to significant improvements in productivity and serves as a model for other companies,” Hans-Georg Scheibe, Director of ROI Management Consulting AG, explained regarding the selection of Bosch Rexroth. The panel arrived at its decision on the basis of comprehensible indicators as well as an on-site visit. The award was given during the course of the Second Industry 4.0 Convention.

Over 200 different hydraulic valves are assembled into a single value stream on the assembly line at the Bosch Rexroth plant in Homburg/Saar. Its special feature: using an RFID Chip on the work piece, the nine intelligent stations on the line recognize how the finished product has to be assembled and, accordingly, which operational steps are necessary. Displays show personnel the corresponding working instructions for the version that is to be processed. “The assembly line integrates human, product, and machine under conditions of flexible mass production“, stressed Frank Hess, Plant Manager at the Rexroth plant in Homburg. “Using this, we can economically manufacture a multitude of customized products down to batch sizes of one.”

In the planning and implementation of the assembly line Bosch Rexroth primarily used its own products and solutions. The specialist for drive and control solutions links open automation solutions with its own intelligence. In 2013 Bosch Rexroth received the “HERMES AWARD,” an international technology prize, for its Open Core Engineering software solution that integrates machines with company IT.
For more information about Bosch Rexroth and Industry 4.0 visit www.boschrexroth.com/connectedindustry.

About Bosch Rexroth:
Economical, precise, safe, and energy efficient: drive and control technology from Bosch Rexroth moves machines and systems of any size. The company bundles global application experience in the market segments of Mobile Applications, Machinery Applications and Engineering, Factory Automation, and Renewable Energies to develop innovative components as well as tailored system solutions and services. Bosch Rexroth offers its customers hydraulics, electric drives and controls, gear technology, and linear motion and assembly technology all from one source. With locations in over 80 countries, roughly 36,700 associates generated sales revenue of approximately 5.7 billion euros ($7.6 billion) in 2013.

About Bosch:
The Bosch Group is a leading global supplier of technology and services. In 2013, its roughly 281,000 associates generated sales of 46.1 billion euros ($61.2 billion.) (NB: Due to a change in accounting policies, the 2013 figures can only be compared to a limited extent with the 2012 figures). Its operations are divided into four business sectors: Mobility Solutions, Industrial Technology, Consumer Goods, and Energy and Building Technology. The Bosch Group comprises Robert Bosch GmbH and its roughly 360 subsidiaries and regional companies in some 50 countries. If its sales and service partners are included, then Bosch is represented in roughly 150 countries. This worldwide development, manufacturing, and sales network is the foundation for further growth. In 2013, the Bosch Group invested some 4.5 billion euros in research and development and applied for some 5,000 patents. This is an average of 20 patents per day. The Bosch Group’s products and services are designed to fascinate, and to improve the quality of life by providing solutions which are both innovative and beneficial. In this way, the company offers technology worldwide that is “Invented for life.”

FlexLink Case Study: Not just a Platform, a Partnership