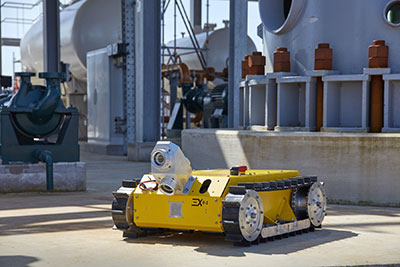 Robots for routine and ad-hoc safety checks in unmanned systems are used wherever people are reluctant to be present. ExRobotics B.V., based in Halsteren, The Netherlands, is a leading expert in this field. Their products replace the sight, hearing, smell, touch and hands of their users. The Dutch manufacturer relies on image processing with industrial cameras from IDS Imaging Development Systems GmbH.

In certain industrial areas, working under extreme conditions is essential. Robots are increasingly being used to minimize the risk for employees. Based on the experience of many years of cooperation with a multinational oil and gas group, ExRobotics has developed a series of robots especially for the inspection and monitoring of hazardous areas. The main target market is unmanned oil and gas facilities in harsh climatic zones or with a particularly high risk potential, but also markets such as the nuclear, mining, energy and chemical industries.

The company attaches great importance to ensuring that all robots are IECEX Zone 1 or ATEX certified at component level and thus comply with international or European directives for explosion protection. Thus, ExRobotics can produce modularly and faster without having to create a new certificate for every possible configuration.

The basic idea is as simple as it is ingenious: The devices communicate with an operator in a secure control room via a wireless network. Human operators do not have to enter the danger zone. In addition, travel time and costs are eliminated. Whether on land or at sea, the control of several robots at different locations at the same time is just easily possible. And this from a distance of several hundred or even thousand kilometers.

"We have shown that we can operate the robot over a distance of 9500 kilometers," says Samir El Awadi, commercial director at ExRobotics, referring to a recent test. A robot at the ExRobotics plant in the Netherlands was controlled from the other side of the world, from Rio de Janeiro, Brazil. This is a crucial point, as a broad reach is essential for the main players in the oil and gas industry in the Middle East, North America and the Far East.

The robots of the first generation - ExR-1 - operate purely remote-controlled. This means that they always need an operator to control and guide them. "Our first generation products rely on human eyes to interpret the images they see. However we're working to add machine vision thus reducing the load on humans. In particular we're working on gas plume and vibration detection," explains Samir El Awadi. The further developed ´big brother´, the ExR-1.1, is therefore already designed for the independent performance of routine security checks. The user has the choice of operating the robot directly from a distance, typically via the public 4G network, or allowing it to operate autonomously. In this case, the operator reacts only to warning messages and can check the monitoring information later if necessary. ExR-1.1 is also engineered for self-coupling and self-charging, with a maximum of 2 maintenance intervals per year.

Different sensors of the robot serve as eyes and ears of the operator. It is fitted with a microphone for sound monitoring. Additionally there are three uEye cameras on board. A USB 3.0 UI-3591LE-C-HQ with 18 megapixel sensor for forward viewing, zoom and inspection and two USB 2.0 UI-1461LE-C-HQ cameras with 3.1 megapixels for navigation. The robot automatically navigates between the inspection locations and contacts the operator when it is on site and ready for inspection. White lines and other signal signs, such as beacons, are used as orientation aids.

Why IDS cameras?
Robustness and reliability, even in extreme heat and cold, were two of the decisive criteria when selecting the camera. IDS cameras also support the standard vision interfaces. Of course, the implemented sensors and the speed of the models also played an important role.

The USB 3.0 model UI-3591LE-C-HQ offers a very high resolution with its 18 megapixel CMOS color sensor from ON Semiconductor. The extremely light-sensitive single-board camera captures the smallest details and is particularly suitable for shots with variable object distances and changing light conditions - ideal for the purposes of ExRobotics. Thanks to its minimal size the cost-effective and versatile project camera offers an easy, space-saving integration.  As well the USB 2.0 UI-1461LE-C-HQ with its very light-sensitive CMOS sensor also from ON Semiconductor meets all requirements. The ½" large format sensor with a resolution of 2048 x 1536 pixels renders extremely low noise performance with extraordinary color accuracy. The cost-effective, compact board level camera offers 2 GPIOs, trigger and flash as well as an I²C bus for triggering external devices.

ExRobotics used the uEye API - part of the comprehensive IDS Software Development Kit (SDK) - to integrate the cameras into their system. The SDK or IDS Software Suite for Windows and Linux (32- and 64-bit) is included and identical for all models - no matter if with USB 3.1 Gen 1, USB 3.0, USB 2.0 or GigE connection. In addition, ExRobotics developed its own specific software with which the images of the robot can be processed. This includes some very user-friendly zoom and snap functions - important and necessary for monitoring and for detailed images during inspection.

"Robots are new to surface oil and gas facilities but they are gaining credibility and we are receiving enquiries from around the World. We will be deploying 10 robots at NAM's, a Dutch joint venture between Shell and ExonMobil, in the second half of 2018. This will be a world first," underlines El Awadi. These robots of the first batch can operate in a temperature range of -20 to +50 degrees Celsius. With minor modifications a range of -40C to +60C is within reach.

The focus in the area of functionality will shift towards more autonomy, cloud-based storage systems and the use of more and more image processing coupled with artificial intelligence. The robots of the ExR series are therefore more than just tools; they become independent helpers in the service of safety.

RND - Get to Know RND Automation and Engineering

FabImage® software: discover the power of the new Deep Learning