«driven» takes a look at the fourth planet 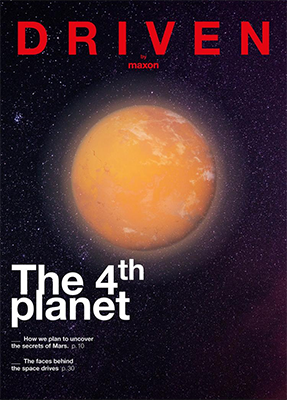 Our fascination with Mars is stronger than ever, again and again, researchers are drawn to it. At this very moment, yet another robot mission is on its way to uncover the secrets of Mars. This mission will also involve the first helicopter flight in space. We’ve dedicated this issue of driven to the Perseverance mission and all of the other explorative missions before it.

With the aid of multiple robot missions over the last three decades, researchers have been able to come to astonishing conclusions about Mars. We now know that there was liquid water there in the past, that the planet had a thin atmosphere, and that even today, there is ice at the poles. But was there also once life on Mars? To answer this question, NASA is sending its Perseverance rover to take soil samples that will later be brought back to Earth. This mission is the culmination of an incredible amount of preparation, hard work, and the latest technology. Details on this and other fascinating insights can be found in this latest issue of driven, the maxon magazine.

Readers will discover how years of collaboration between drive specialist maxon and the space experts at JPL have produced the BLDC motors which will handle the valuable soil samples on Mars. «driven» introduces the people behind those drives. The magazine also features an interview with the project manager of the first Mars helicopter.

You don’t always need to fly all the way to Mars to find exciting space projects. That has been demonstrated by Swiss startup ClearSpace, which is developing an ingenious system to capture and dispose of decommissioned satellites. The moon, too, has a special section in the current issue of driven. Future moon bases are being planned to allow permanent settlement. How will they be built? The answer: 3D printing.

maxon’s driven magazine features interesting application stories, interviews, and news from the world of drive technology.  The current issue is available online and can also be ordered in print, free of charge: magazine.maxongroup.com.

If you are interested in space drives, and want to learn more about the experience and expertise of maxon, visit: mars.maxonworld.com

Differences between AGV and AMR