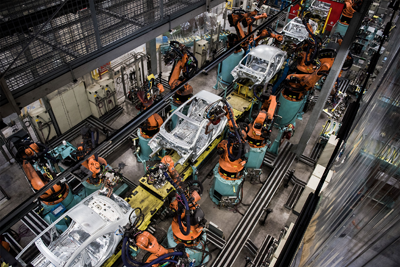 Facing a widening skills gap, two years ago we made a Call for Action. A call for the robotics and automation community, for the greater manufacturing sector, for educators and policymakers, to step up their game in the quest to prepare our next generation of workers with the skills needed for the Fourth Industrial Revolution.

In January, the most far-reaching move to date came with the formation of the Advanced Robotics for Manufacturing (ARM) Institute. Boosted by $253 million in public and private funding, ARM is the first nationwide initiative of its kind to bring together leadership and expertise from academia, research, industry, government, and nonprofits in a collaborative effort to help revitalize American manufacturing.

ARM has a four-pronged mission:

The U.S. Department of Defense will invest $80 million in the program over a five-year period. The additional $173 million will come from over 225 partner stakeholders.

The DOD’s list of ARM partners reads like a Who’s Who of robotics and automation. The consortium includes suppliers, integrators and large multinational end users of robots; universities and community colleges; STEM, workforce and industry advocacy groups; and state and local government agencies. The Robotic Industries Association (RIA) and many of its members are consortium partners.

“RIA is excited about the opportunity to partner with the ARM Institute,” says Bob Doyle, Director of Communications at the Robotic Industries Association. “We’re looking forward to working with the institute and our RIA membership to strengthen U.S. manufacturing and support the robotics industry’s continued success.”

ARM is the 14th institute in the Manufacturing USA network, a program in which industry, academia, and government co-invest in the development of manufacturing technologies critical to future competitiveness. The other manufacturing innovation institutes focus on smart sensors, photonics, hybrid electronics, 3D printing, biopharma, advanced composites, and revolutionary fibers and textiles, among other initiatives. 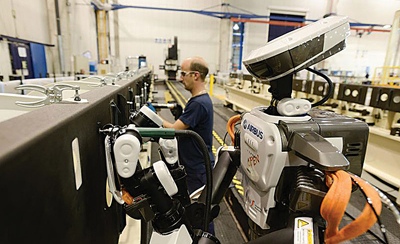 Nationwide Collaboration for Robotic Manufacturing
The key to ARM, and the other manufacturing innovation hubs, is collaboration. Shared expertise and resources across public-private sectors and across industries has the potential to achieve much more, and at an accelerated pace, than individual organizations can do alone. The large multinationals bring experience and vast resources, while academia and startups come with fresh new ideas that challenge conventional thinking and spark technological innovation. Connecting industry with education and local governments will help bolster the current and future workforce for the changing employment landscape in the age of automation.

Advocates from all over the country with knowledge of the unique challenges and opportunities in their regions will come together to work towards a common goal. The possibilities are tremendous for an unprecedented alliance of this magnitude, and this for an industry that has already pushed the boundaries time and again.

ARM’s main hub is located in Pittsburgh, amidst a thriving robotics cluster bustling around Carnegie Mellon University (CMU). Beyond ARM’s nationwide reach, two other factors are integral to the initiative.

“For the first time we have a concerted effort to make robots more versatile, easier to deploy and redeploy, and more cost-effective,” says Howard Choset, CMU Robotics Institute professor and the new Chief Technology Officer at the ARM Institute. He notes that the program also emphasizes collaborative robotics, where people work hand in hand with robots.

This last point is important because it stresses the symbiotic relationship between humans and robots. Each complements, not substitutes, the other. Robots will perform the repetitive, programmable or easily learned tasks, freeing up humans to perform more value-added contributions that require creativity, problem solving and critical thinking.

In turn, we advance the capabilities of robots and their enabling technologies, e.g., sensors, software, end-of-arm tooling, AI, cloud computing. Robots get better at what they do. Humans get better at what we do. The cycle loops, always pushing us to raise our game.

Automate or Evaporate
ARM will work to democratize manufacturing, especially for small and medium-sized enterprises. Choset says the goal is to make automation and robotics more accessible to SMEs. While he and a team were writing the proposal, they spent nine days traveling around the country surveying industry.

“We learned from small companies what they want. They want automation. Their phrase was ‘automate or evaporate.’ They understand that if they want to compete effectively on a global scale, they have to adopt robotics.”

In the 1980s we heard a similar battle cry from then General Electric executive James Baker, addressing rising competitive threats from East Asia for manufacturing dominance. “Automate, emigrate or evaporate,” he said, meaning that American manufacturers must either adopt automation, move production overseas, or succumb to certain demise.

As global wages rise, we are learning that offshoring is not a long-term solution. The new reality is much simpler. Automate or evaporate.

Automotive, Aerospace, Electronics, Textiles
ARM will focus on four sectors it deems ripe for robotic manufacturing adoption. The first three – automotive, aerospace and electronics – are no surprise to anyone in automation. These sectors are expected to represent 75 percent of all robot use in the country by 2025, and many SMEs supply the big players in these industries.

But why the fourth sector – textiles? Many see the textiles industry as a massive opportunity for automation and robotics. While Choset admits to being intimidated, because flexible fabrics have been notoriously difficult for robots to manipulate, he is inspired.

“If we can crack the textiles nut, then we will have a significant impact on how textiles are manufactured,” says Choset. “Right now, very little of that is in the U.S.”

Choset wants to create new jobs in industries that have left the country for other shores. He stresses that our focus should be on reclaiming the industry, not necessarily the old jobs. Automation will create different kinds of jobs, higher-value jobs, for workers with a variety of skill levels. Perhaps more technically inclined creative jobs for dreaming up new engineered fabrics, coupling everyday textiles with wearable technology, or supervising and maintaining teams of sewing robots on the assembly line.

“I hooked up with the fibers people (Advanced Functional Fabrics of America) and we’ve been thinking about joint projects we can do together,” says Choset. “Once we realized the full potential of the textile industry, it became very apparent that we need to see how we can automate textiles.” 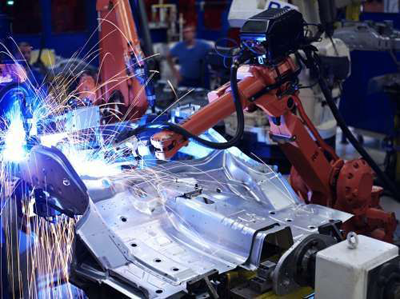 “These aren’t large companies like Lockheed that can assign a large team of people to research which robot systems are best.”

ARM will help educate small companies to better understand robotics technology, so they can make informed decisions in evaluating and purchasing the technology to suit their needs. ARM will also educate the workforce, so they have the skillsets to embrace, use and maintain robots. The goal is to develop a highly trained and skilled workforce that will create a pipeline of workers to support the advancement of robotics.

For the initiative to be successful, technology and education need to be widespread and easily accessible. To that end, a series of regional hubs has been devised called Regional Robotics Innovation Collaboratives, or RRICs, to serve as local focal points for ARM. Choset says they plan to have at least eight of them throughout the country, making it easier for SMEs to access the resources and expertise they need to facilitate robotic deployment and workforce development.

Each RRIC will be responsible for regional outreach in close collaboration with the Manufacturing Extension Partnership (MEP) network. One of Choset’s colleagues, ARM’s Chief Workforce Officer Rebecca Hartley, will be working with MEP centers across the nation to make this happen.

Choset concedes that automation will bring widespread changes. Manufacturing jobs won’t be completely eliminated. But the nature of jobs will change.

“Whenever there’s automation, there’s always going to be some kind of change in the composition of jobs,” says Choset. “That’s just a fact of life.”

History has shown us that many more jobs are created.

“But we can’t ignore these displaced workers, either. That’s part of what ARM will be doing,” explains Choset. “We’ll be helping these people, training them with robots. But it’s also worth noting that another reality of today is that no one has the same job throughout their whole career, at least not in manufacturing. You’re always being retrained, because there’s innovation coming. That retraining is another fact of life.” 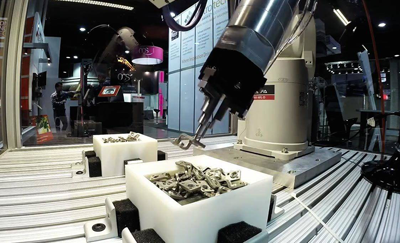 Retraining that we’re seeing in Seattle’s aerospace industry. At Boeing, mechanics are learning to operate robots that are “replacing” them on the 777X assembly line (watch the video). In the FAUB program, the robots are now doing the riveting work on airplane fuselages, relieving the mechanics from what was once an ergonomically challenging and potentially injurious manual process. Automation is not only increasing productivity, saving jobs, and transitioning workers to more fulfilling roles, it will eventually create more jobs. Boeing will reportedly need 10 percent more workers to maintain the automation.

“The reality is other countries are embracing robotics. If we don’t adopt robotics right now, we’re just going to lose out. That brings us back to the small companies in our industry days. They are the ones that said ‘automate or evaporate.’

These are companies that work in the supply chain, people who make parts for the automotive, aerospace and electronics industries. Choset says it was a wide mix of small companies.

“We were talking with this one company. They have this job that takes two people. We said if you get a robot, this job will only require one person. So we ask, what about that other guy who loses a job. They say no, no, no, he still has a job here. The more productive and cost-effective we are, the more likely we stay in business and our business expands. So, yes, this job went from a two-person job to a one-person job, but now our productivity has gone up by a factor of four and we’re more competitive.”

Find out how other SMEs “in the know” win with automation.

Democratizing Robotics, Manufacturing
When asked why he was drawn to ARM’s mission, Choset explains how it aligns with his research and work in robotics. There’s an underlying theme.

“With this surgical snake robot, we can now offload the burden of ‘routine work’ and save the surgeons for the hard stuff. The non-surgeons can perform more routine procedures. The fact that we can have people perform procedures that require less in-depth training, you can lower the barriers for delivering medical care and make it accessible to more people. We are working towards democratizing medical care.”

Similarly, in his evolving work with modular robotics, Choset is working to democratize manufacturing. He cofounded HEBI Robotics, which uses a system of modular actuators to quickly assemble custom robots in a variety of configurations, thereby accelerating robot build and deployment, and lowering costs.

Democratizing robotics for the masses, and particularly for the over 90 percent of U.S. companies that are SMEs, will help level the playing field and create opportunities for a stronger manufacturing base closer to home.

Talking about Jobs at Automate
Coincidently, HEBI Robotics is one of eight finalists in the Automate Launch Pad Startup Competition, taking place at Automate 2017 in Chicago on April 3-6.

Show organizer, the Association for Advancing Automation (A3), will host a discussion on jobs in the automation industry and release its latest white paper, Work in the Automation Age: Sustainable Careers Today and Into the Future. The report will show how automation offers tremendous new opportunities for jobs, but that they will be different from jobs of the past, and will require new skillsets and a new approach to education and training. Showgoers will get the first peek on opening day.