Safety First: A Review of Robotic Safeguarding Devices and Issues

Industrial robots use is increasing, and so the need to understand robot safety issues affects an ever-growing cross-section of industries, applications and personnel. For more than twenty years, Robotic Industries Association has been developing robot safety standards and is now in the fifteenth year for its annual National Robot Safety Conference.

Today, a variety of safeguarding devices and resources are specifically designed for robot systems. Successfully integrating these devices into a work cell requires a solid grounding in fundamental engineering, a dose of insight into human behavior, and a good understanding of industry standards and compliance issues. One of the best ways to augment a safety strategy is through networking. For many top robotics users and experts, this will be happen at the 15th Annual National Robot Safety Conference (NRSC), in Cincinnati, Ohio, October 27-30, 2003.

Many factors need to be considered when choosing any device for use in a work cell, including plug-and-play considerations, conclusions to be made from risk assessment, and so on. New industrial robot technology and safeguarding devices have flourished for decades in North America as companies seek higher production yields and safer work environments.

'The overriding interest of a manufacturer is to keep things running. Whenever a safeguarding device signals a robot to stop, it should be because of a personal safety issue and not a nuisance stop nor because the unit is unreliable,' asserts Roberta Nelson Shea of Honeywell Sensing and Control. Nelson Shea is the Safety Business Development Manager at the Freeport, Illinois, maker of robotic safety equipment. She continued by saying 'The biggest challenge is to try to integrate safety equipment and production equipment to have maximum up-time yet having people safeguarded.'

If a safeguarding device impedes an operator's need for cell access, or is not intuitive, it might lead to unsafe behavior by manufacturing personnel and maintenance workers. For example, a worker might trick or bypass a safety device to enter a cell to clear a jam, a dropped part, or something else. These are known as 'jumpers,' people who jump past the safety devices for the sake of production or maintenance issues. When this happens, the chances increase greatly for personnel to be injured when the safeguarding device fails to halt the robot for a legitimate safety concern. The optimal way to prevent this nightmare scenario is to use safeguarding technology that is robust and proven reliable.

Of course, budgets and physical connectivity are other things to keep an eye on when selecting and integrating a safeguarding device.

'One problem is how to physically connect the safeguarding device to the robot,' says Thomas E. Tabaska, Quality Manager at John Deere Worldwide, Horicon, Wisconsin. 'You can spend lots of money on a reliable safety control device, but if it uses only one wire or one set of contacts to connect it to your system, the device is only as robust as that connection.'

Tabaska spoke of other potential hurtles that integrators must overcome when linking safeguarding devices with a robot.

Tabaska makes another important point that integrators and operators need to remember.

'It is not necessarily the robot that is the danger. The hazard could be moving tables, parts, servo motors that turn or move a part, or extra axes that perform part loading.' Operators need to be safeguarded from these systems as well as from the robot itself.

'Determining what type of safeguarding device to be used in a work cell begins with the design process,' says Steven Freedman. 'When a cell is designed, hopefully safety is taken into account to minimize potential hazards.' Freedman is the Director of Safety Systems at SICK, Inc., Minneapolis, Minnesota, a maker of robotic safety devices. While emphasizing the necessity for safety, Freedman added that the solution has to be cost-efficient in order to be effective.

Some higher technology solutions to safeguarding human operators in a work cell include light curtains, laser sensors, and presence-sensing devices. The purpose of all these devices is to shut down the robot completely, or halt the movement of the robotic arm, if a person is in an area within a robot's work envelope.

In hazardous applications, such as working with explosive or radioactive materials, the robot itself is the safety device.

'Radioactive or explosive materials are the reason that a robot is used. A robot is used not to increase productivity as in industry, but to remote people from the hazardous operation,' said Dr. William Drotning.' Dr. Drotning is Project Leader at the Robotics Center in Sandia National Laboratories, Albuquerque, New Mexico.

The robotic safety standard, ANSI/RIA R15.06-1999 provides procedures for industrial robot manufacture, remanufacture and rebuild as well as robotic system integration. The standard is a set of voluntary guidelines of methods to safeguarding operators.

RIA's own Jeff Fryman summarized the R15.06-1999 and the risk-assessment process.

'R15.06-1999 is broad-based and makes robot makers, integrators and operators aware of their responsibility to safeguard people in or near a workcell. Investing in safety is a cost-avoidance issue,' Fryman said. 'Those doing risk assessment had their eyes opened going through the process. Some not-so-obvious safety issues were taken for granted until integrators, end-users, and robot makers did risk assessments.' Fryman is RIA's Director of Standards Development and was key in formulating R15.06-1999.

Wayne Maynard, Director of Ergonomics at the Liberty Mutual Insurance Company, Hopkinton, Massachusetts, also had a major hand in coming up with R15.06-1999's guidelines.

'R15.06-1999 offers very good guidelines on risk assessment for robotic operations. This is a great enhancement over previous versions of the standard,' Maynard said. 'I especially like the guidelines on how to do risk assessments. This guideline was made by people in the robotics industry, not just safety professionals. For this reason, R15.06-1999 has a great deal of credibility.'

Because R15.06-1999 is a guideline and not a fixed regulation, there is inherent flexibility of how to comply.

'There are many ways of keeping people safe and there is not just one style for every situation,' Gil Dominguez said. Dominguez is Senior Engineer at Rimrock Automation, Inc, New Berlin, Wisconsin. R15.06-1999 recognizes this. Flexibility is built into the R15.06-1999 safety standard. 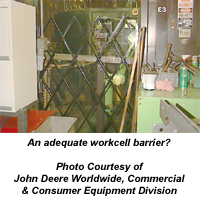 Safe work cell design, although important, cannot prevent every hazard. After designing-in safety, installing the appropriate safeguarding device is the next order of business. Liberty Mutual's Wayne Maynard speaks to that.

'The first step is to design-out hazards from happening. If this can not be done, the best course of action to take is to install the proper safety system to shut down the work cell if someone enters a dangerous area.' An ideally set-up safeguarding device would not allow the robot to restart until the person leaves the hazardous area. Maynard concluded by saying 'R15.06-1999 addresses shut-downs nicely, especially with E-stops.' R15.06-1999 provides guidelines to minimize people from entering an area that is not safeguarded.

What do RIA members have in store to present at the National Robot Safety Conference? Several people from RIA companies have planned presentations in the form of workshops and case studies.

'I will discuss fence circuits, interlock gate circuits, and circuits that use light curtains or floor mats to shut the robot down when someone is loading/unloading parts within its reach,' Dominguez said.

Dominguez went on to say that his workshop will include design elements for muting circuits and zone switches. 'These allow the robot to operate on one side of the cell while the operator is on the other side, while preventing the robot from moving to the side that the operator is on.'

'We give attendees warnings on certain things such as not taking your safeguard device and wire it into the inputs of a PLC to program safety. This is not in compliance with R15.06-1999,' Dominguez said. Dominguez also will be conducting a workshop on proper design of safety circuits for robot applications.

'I will present a case study based upon a client request to evaluate a robot work cell that will be integrated or a robotic system that is already installed. We perform a review to determine if a work cell is in compliance with R15.06-1999,' said Winrich.

Winrich went on to say, 'UL looks at fundamental safeguarding applications, such as interlocked gates, door switches, light curtains, and laser scanners. This helps to make the customer and integrator more familiar with R15.06-1999 guidelines and bring the work cell into compliance.' Winrich explained that should appropriate countermeasures be necessary, UL verifies this is undertaken. When accomplished, the UL Field Evaluated Product label is affixed on the robot, the controller, and the work cell. Details of these issues will be a part of Winrich's NRSC case study.

'One of my case studies is on new technology standards. I will talk about dynamic limiting, which is based upon when integrators want the operator to be in the hazard area,' Tabaska said. Dynamic limiting is a strategy of redefining safeguarded space by using electronic devices. 'This requires the removal of motor power, but there are times when you need motor power on,' Tabaska illustrated. 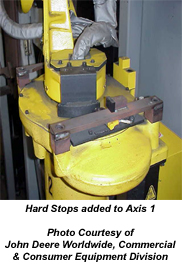 'The other case study covers remote axis control. I go into issues such as slow speed requirements on existing cells and older cells,' said Tabaska. 'I will also talk about hard stops. I recommend putting in hard stops to prevent the robot from moving any further than is actually needed.'

Tabaska will evaluate discoveries from risk assessment, which he refers to as a 'Wall of Shame.'

'The Wall of Shame displays blatant safety violations. I will show photos of hazards we found through risk assessment. We do a quick risk assessment and show how there are a lot of simple things that can be done incrementally that will get you a lot of value,' Tabaska noted.

Wayne Maynard's NRSC presentation will come from a different perspective. 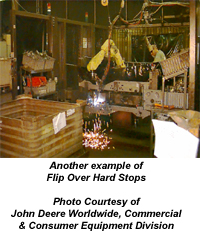 Roberta Nelson Shea plans on presenting a Q & A-type of forum at the NRSC.

'I will be presenting generally asked questions about the R15.06-1999 safety standard. Also, I will be doing a workshop on safeguarding device selection that will go through various technologies, how they are applied, and when or where someone can use them.' Nelson Shea chaired RIA's 15.06 Safety Standard Committee for several years.

'Applying a safeguarding device comes down to how much access is needed. If minimal, an interlock barrier is sufficient. If access is frequent, use a presence-sensing device.'

Other questions Nelson Shea says need asking include 'Are there projectiles?'

'If so and you need frequent and easy access, integrators would have to modify the work cell. The need to safeguard against projectiles is not only for the perimeter of the work cell, but also of each task that is planned or envisioned for the system itself.' Nelson Shea advocates interlock barriers to contain objects that could be thrown.'

Fryman of RIA has a simple approach when putting together his NRSC presentation.

'I will present an in-depth review of the R15.06-1999 standard and help people understand it. People who circumvent the standard or ignore it, do so at their peril.'