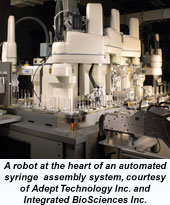 Doctor’s Orders
Robots are progressively being applied more in direct patient care, says Craig Tomita. ‘‘In healthcare, robots are being used increasingly to position a wide variety of medical devices in diagnostics, therapy, and surgery. The accuracy and steadiness that robots can provide is becoming apparent to healthcare professionals.’‘ Tomita adds that the use of robotics will increase in the healthcare professions.

‘‘KUKA robots are used to position treatment devices such as linear accelerators,’‘ says Michael Beaupre, Director of New Market Development at KUKA Robotics Corp., Clinton Township, Michigan. Beaupre explains that, ‘‘Linear accelerators are small devices mounted on the end of the robot to direct a thin beam of radiation into a tumor. Using the robot, doctors can precisely place high dose radiation inside a tumor.’‘ Furthermore, surgeons are using robotics for very precise patient positioning in radiation and proton therapies, says Beaupre.

Recent advances in surgical robotics has promise to be a boon in cardiological procedures. Still in the prototype stage of development, this snake-like device adheres to a patient’s beating heart after being inserted through a small incision below the sternum. The robot can access areas of the heart that normally require the patient’s lungs to be deflated. The hope for this type of robot is to inject medication, attach pacemakers or target specific points for cauterization as a treatment for cardiac arrhythmia into areas of the heart that are difficult to access.

Robotics are used to fabricate medical devices such as artificial hips and knees. The material used in these devices pose special challenges that robotics readily meet.

‘‘Artificial knee and hips castings vary from part to part. Integrators need to come up with a method of putting compliance into the process of material removal to be able to handle that variation,’‘ says Fritz Carlson, President of the Acme Manufacturing Co., Auburn Hills, Michigan.

RX
Prescriptions are being filled robotically, comments Tomita. ‘‘Robots are being used increasingly in pharmacies, and have been used for many years in central fill pharmacies. The trend is moving increasingly towards automating pill dispensing in hospitals and at the retail level. This interest at the retail level is fueled by a shortage of pharmacists in the United States and a by desire to get pharmacists out from behind the counter to allow them to interact with patients.’‘

Using robotics to help deal with a shortage of trained people in laboratories is also on the mind of Craig Rubenstein. ‘‘Diagnostic laboratories have a critical shortage of qualified staff that drives demand for robotics. In addition, the importance of timely and accurate processing and specimen tracking contributes to the justification for robotics. In research laboratories, high-precision liquid handling is best performed by robotics.’‘

Like the United States, Europe has a shortage of qualified pharmacists and laboratory technicians. Sylvie Algarra asserts, ‘‘Staffing pharmacies and laboratories is a problem, especially in Europe. Laboratories have difficulty in getting people to work in these environments due to increasingly strict standards. Pharmaceutical companies want to avoid the expense in training people, so they turn to robotics to help reduce their staffing problems.’‘

It’s all About the Data
Laboratory research generates a tremendous amount of data. Robotics have an increasingly important role in collecting and organizing this vast amount of data. ‘‘Life science applications tend to be highly data-centric, with complex data management requirements and large databases,’‘ says Rubenstein. ‘‘The importance of timely and accurate processing and specimen tracking contribute to the justification for robotics.’‘ 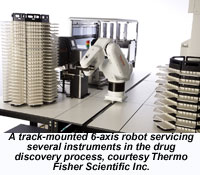 In a similar vein, ‘‘Drug discovery is a very data-intensive and labor-intensive activity, so this application is perfect for robotics,’‘ observes Bryan Greenway, Director of Technology Development at Thermo Fisher Scientific Inc., Brentwood, Tennessee. ‘‘The product of laboratory research is not the samples themselves but the data that is generated. Typically, once a sample goes through the system, it is disposed of. Laboratory research is extremely data-intensive, as each sample might generate four to five megabytes of data, or a gigabyte, if the data has images associated with it.’‘ Handling data is a huge challenge for end-users, Greenway says, and robotics facilitate the orderly accounting of all that data.

The process of high throughput screening (HTS) might have 10,000 compounds screened against a specific pathogen, thus the need for robust data management. Data management is of particular importance when running tests for an individual patient. 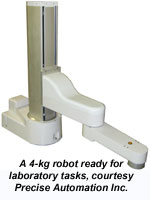 ‘‘Robotic screening involves getting samples from medical outlets from all over the world and sending them to a central laboratory for diagnostic tests. Robots facilitate keeping track of patient information and accurately returning that data to the laboratory of origin,’‘ remarks Brian Carlisle, President of Precise Automation Inc., Los Altos, California. ‘‘The data management process is automated to eliminate the opportunity for error, to get the right information back to the right patient.’‘

Smaller is Better
The expense of biological assays are high and getting higher. Because of this cost, researchers have an incentive to use these compounds in the most infinitesimal quantities possible. Robotics give researchers the advantage of using tiny quantities of assays and to keep samples safe when moving them within the laboratory. 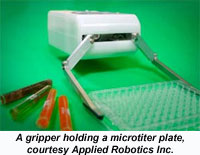 ‘‘Removing people from the screening process reduces the potential for contamination and the potential for dropped samples when handling them in laboratories. Robotics perform these tasks much faster with more precision and accuracy,’‘ says Daniel Ferrara, Life Sciences Market Manager with Applied Robotics, Glenville, New York.

Similarly, Dr. Andrew Goldenberg, PhD, President and Chief Executive Officer at Engineering Services Inc. (ESI), Toronto, Ontario, Canada, says, ‘‘Robots can quickly and precisely place 20,000 to 40,000 spots on glass slides for analysis. Human cannot do that repeatedly.’‘ Goldenberg says robots can perform their tasks by handling precious assays in ever smaller quantities. ‘‘The trend is moving towards using less assay material while producing the same reactions.’‘ Goldenberg notes that only a few picoliters of bioassays are necessary to produce a reaction, rather than nanoliters of the highly valuable material required when manipulated manually.

Clean Machines
In the manufacture of medical devices, keeping the robot and peripheral equipment sanitary is of the utmost importance. ‘‘End-users would like robots to be sanitized with hydrogen peroxide vapor,’‘ professes Mark Handelsman, Manager of Industry Marketing with FANUC Robotics America Inc., Rochester Hills, Michigan. ‘‘This will change very soon.’‘

Sylvie Algarra of Stäubli also believes that being able to sterilize robots for medical device manufacture is essential. ‘‘Going nearer to products, such as implants and pharmaceuticals, robots need to meet requirements of clean room Class Four environments. For those applications we use vaporous hydrogen peroxide resistant robots.’‘

Robots 2008
End-users, robot makers and integrators will gather to update themselves on the latest trends in robotics, including life science applications, during the Robots 2008 Conference to be held at the Hynes Convention Center in Boston, Massachusetts, June 10-12. This event, hosted by the Robotic Industries Association (RIA), Ann Arbor, Michigan, will feature several speakers who will give presentations under the general theme of ‘‘What’s Next in Robotics.’‘

Lou Guarracina of HighRes Biosolutions says, ‘‘My presentation will include information on our docking station technology and how that relates to modular systems for robotics. Our systems give end-users in research laboratories the ability to move instruments or machines from one robotic system to another on-demand.’‘

Andrew Goldenberg of ESI will talk about advances in mobile robotics in both a laboratory setting and in irregular terrain.

RIA’s own Jeffery Fryman, Director of Standards Development, will give a tutorial entitled ‘‘Next Generation Robots – A First Glimpse at How New Robots Will Interact with Operators,’‘ in addition to leading a seminar on robot safety issues.

Future Labs
While robotics have been a part of the mix in the life sciences for several years, they are slated to become a necessity in the near future. ‘‘In robotics in life science applications, the focus will continue to be on accuracy and safety. Anything robot suppliers and integrators can do to enhance accuracy and safety is of great interest to end-users,’‘ says Mike Beaupre of KUKA. ‘‘A more compact robot with more use of carbon fiber to increase payload capability will increase in the next five years. Due to the limited space in hospitals and clinics, we will focus more on miniaturizing laboratory robotics.’‘

For more information, you may contact any of the experts listed in this article or visit Robotics Online, Technical Papers.