Robotics in Security and Military Applications

Robotics have been a staple of advanced manufacturing for over half a century. As robots and their peripheral equipment become more sophisticated, reliable and miniaturized, these systems are increasingly being utilized for military and law enforcement purposes. 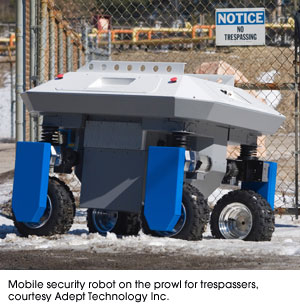 “Military and battlefield applications continue to grow at an accelerated pace due to demand fueled by government investment. Over the past decade, we have seen increasing levels of investment in autonomous vehicles used for surveillance and security,” says Rush LaSelle, Vice President and General Manager with Adept Technology Inc. (Pleasanton, California) “Applications range from monitoring perimeters of secured areas such as airports to acting as a night watchman.”

Robots go to War
Mobile robotics play an increasingly important role in military matters, from patrol to dealing with potential explosives. “With suitable sensors and cameras to perform different missions, mobile robots are operated remotely for reconnaissance patrol and relay back video images to an operator,” says Dr. Andrew Goldenberg, PhD, Chief Executive Officer and President of Engineering Services Inc. (ESI, Toronto Ontario, Canada) “Robots can neutralize suspicious objects that may explode. The platform has a robot arm to pick up explosives or suspected hazards in military or civilian settings.”

Goldenberg goes on to say, “The mobile robotic platform is mounted on a rectangular box with electronic equipment. The platform moves on wheels or tracks, or both, and is usually battery-powered. Communication equipment and sensors can detect images, sounds, gases and other hazards. The communication systems read sensors and relay that information to the operator.”

Robotics help meet challenges posed by the specter of urban terrorism. “Instead of having people get close to hazards such as unattended objects or car bombs, robots are used. If an operator concludes a dangerous object might explode, the robot could neutralize that object by shooting to detonate it,” Goldenberg says. “Mobile robots detect and explode in-ground mines or improvised explosive devices.” These same mobile robotic systems are used for neutralizing or exploding forgotten ordnance and mines after conflicts cease.

Likewise, LaSelle says, “Government acts as a catalyst for these applications due to the heavy investment after the terrorist attacks of September 11, 2001. Security and patrol functionalities have extended into the private sector. Companies invest in autonomous vehicles to monitor warehouses, factories, and office spaces. These sentinel applications provide users with the ability to monitor a variety of conditions such as motion, intrusion, water ingress, and temperature.”

Keeping tabs on temperature is of special importance to server farms and other sensitive electronic systems, LaSelle says. “A key area of activity for mobile robotic platforms is patrolling vacant properties and warehouses due to the reliability and low costs attributed to autonomous vehicles,” adds LaSelle.

Goldenberg’s and LaSelle’s portrayals of tasks carried out by mobile robotic platforms is echoed by Sean Thompson, Applications Engineer with MICROMO. (Clearwater, Florida) “Ground-based systems use robotics for surveillance. These platforms are equipped with weapons and cameras.”

Thompson dubs some reconnaissance robots as “throw-bots,” saying these systems are “Small and light robots, robust enough to throw through a window or doorway. The robot is equipped with a camera to see within a building without sending in people.” If the structure is without light, the mobile platform’s camera is equipped 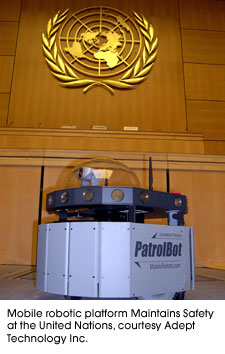 Thompson speaks of robotics to help inspect and maintain nuclear weapons. “Mobile robotic systems inspect nuclear missiles. Commonly, such inspection systems were large, requiring several people in protective suits going into containment systems. Now, smaller self-guided robotic systems require only one person in a protective suit going to a certain point and letting the robot go.” The robot is remotely operated outside the containment system, reducing the number of people and the amount of time people are exposed to relatively high radiation levels, Thompson concludes.

Autonomy or Control
The level of autonomy separates industrial robotics from their battlefield counterparts. “Mobile robotic platforms are operated remotely and do not have the autonomy of industrial robots. Security robotic systems are under the total control of the operator, typically military personnel,” says Goldenberg. “Security robots have not yet been made autonomous, given the purpose of the vehicles, especially if armed.” Due to a handful of instances of friendly fire, the trend has been against providing security robot systems the autonomy of their industrial equivalent, Goldenberg recalls.

Consequently, operator fatigue results from people directing mobile robotic systems denied industrial-strength autonomy, says Goldenberg. “I have heard about concerns with operators of military robots being over-loaded and fatigued while controlling the robot. The robot is given some intelligence, but that intelligence is limited.”

The limited intelligence extends to networking the mobile robots with global positioning satellites. (GPS) Again Andrew Goldenberg: “Mobile robotic systems make use of GPS to navigate. The robot will decide how it will get to its destination and is able to detect a target and the rest of the surrounding environment.”

The autonomy of mobile robotic security systems is also on the mind of Rush LaSelle. Autonomous navigation in delivering goods to a manufacturing line or patrolling a peopled space, to monitoring a security fence or mapping terrain are areas integrators work on developing, says LaSelle. “A variety of technologies are ‘meshed’ to provide comprehensive guidance packages that allow autonomous vehicles to accurately navigate unstructured and undefined spaced indoors as well as outdoors.” These systems avail themselves to GPS, sonar, two- and three- dimensional lasers, among other guidance systems, says LaSelle.

Obstacle Course
Mobile robotic platforms used in national security applications must move within unstructured environments. “The ability to operate over challenging terrain and the ability to autonomously navigate in unstructured environments are areas of focus,” LaSelle points out. “The migration of automated systems from factory lines to moving freely throughout facilities and beyond has created demands on system design.”

LaSelle says mobile robotic systems are designed for indoor or outdoor conditions. “Standard systems are designed with a five to seven year service life depending on the application. Radioactive and harsh chemical environments are evaluated on a case-by-case basis as an almost endless array of conditions exist in the 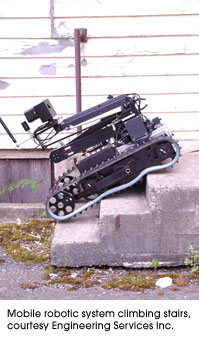 ESI’s Goldenberg has a similar take on a mobile robotic platform to navigate within unstructured environments. “The ability of mobile robotic platform to navigate over uneven terrain, such as asphalt in cities, a corridor in buildings, over carpets, or in water, mud, grass, snow, is an issue. These devices must navigate well in all those situations. Most can to a large extent, due to the design of wheels and tracks,” Goldenberg says.

Configuring a robot to ascend and descend obstacles in unstructured environments with ease is a design challenge and uses more power. The system must be able to overcome both regularly shaped obstacles such as stairs and those of an unspecified shape such as rocks, downed trees and other miscellaneous objects. “The design benchmark is the ability to go up a 45-degree incline of a flat surface or irregular obstacles. Sometimes the requirement is as much as 50 degrees or steeper,” Goldenberg says.

Engineers must consider the center of gravity, torque requirements to ascend inclines, mass, and payloads when designing mobile robotic systems for military purposes.

Securing Security Robots
The security of data transmitted to and from mobile robotic platforms, particularly video, is vital in military or law enforcement operations. “The frequency of transmitting video must be secure if using a wireless connection. Transmission is secured both ways so no one or nothing can interfere with the images,” Goldenberg says. The method of image transfer is not in the hands of integrators of these systems, as is usually the case when designing typical industrial robotic work cells. Rather, the video transmission system is integrated by the end-user, such as military or law enforcement personnel.

“The quality of images must be good because those images are the only way the operator knows what the robot does. The operator does not have the robot in a line of sight but could be a mile away,” Goldenberg says. 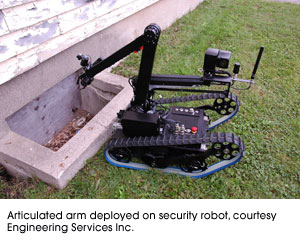 Like their industrial counterparts, security robotic systems use vision technology as a key enabler, says LaSelle. “Vision systems enable a vehicle-mounted articulated arm to pick randomly oriented objects from its environment to monitoring motion in security applications. Mobile systems use a variety of sensory inputs including laser, sonar, as well as tactical inputs to enable a vehicle to dynamically interact with its environment.” Vision is used for both navigation and by the end-of-arm tool to pick and place product in warehouses as well as in tending equipment in remote service applications, remarks LaSelle.

The specialized tasks security robots perform require robust equipment, says Ronald Folkeringa, Business Manager at Intercon 1 (Baxter, Minnesota) “End-users tell us the range of motion and the types of stresses the cable needs to withstand. Specifications might state the cable must withstand plus or minus 180 degrees of torsional rotation over one meter for two million flexes, a demanding requirement.”

Cables must withstand cold environments, down to minus 80 Celsius, says Folkeringa. “Based on specifications, we use certain materials for insulation and jackets, to maintain electrical and flexibility properties at those temperatures.”

How One Engineer Achieved Dust-Free Robot Engraving With RoboDK