With the price of fossil fuels at historic highs, reducing the cost of the energy component of production is on the mind of manufacturers all over the globe. There are several strategies to meet this challenge. One proven method is to deploy robotics.

Lights Out, Nobody Home
Because robots can operate unsupervised, they can produce items while people are not present. The ability to operate in the dark or in unheated environments can lead to substantial energy savings on the part of manufacturers.

‘‘If factories use robots, they can have lights out facilities,’‘ asserts Dick Johnson, General Manager of the material handling segment at FANUC Robotics America, Inc., Rochester Hills, Michigan. Johnson adds that robots can help save money on energy costs by decreasing the need to heat and cool a factory. ‘‘Robots are designed to work across a wide variety of temperature ranges, and are less fragile than human operators. There is less of a need to cool or warm a production plant,’‘ Johnson says.

Likewise, David Arceneaux, Business Development and Marketing Manager at Stäubli Robotics, Duncan, South Carolina, says robots require fewer utilities to perform their functions. ‘‘Robot can operate in dark environments, so there is no need for overhead lighting in fully automated work cells. If the same operation was done manually, there would be a need for overhead lighting and other facilities.’‘

Arceneaux’s colleague at Stäubli, James Cook, agrees. Cook, an applications engineer at Stäubli, says robots can help lower building costs by providing for smaller work cells. ‘‘Manufacturers can fit a larger number of compact cells in the same space to increase production without adding heating, lighting or cooling to the cost of the building,’‘ Cook says. 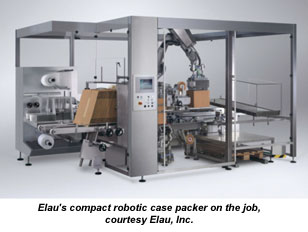 Saving money on utilities is also a concern for John Kowal, Global Marketing Manager at, ELAU Inc., Schaumburg, Illinois. ELAU is a specialist in packaging robotics. ‘‘Floor space is a measure of energy usage because that floor space has to be heated, cooled and lighted. The more that can be produced in a small space, the less the building will cost. Lowering energy costs can be done through the use of compact robotics,’‘ Kowal says.

FANUC Robotics’ Dick Johnson also says that robot controllers can help lower the energy bottom line by turning off peripherals when they are not needed. ‘‘Controllers can shut off motors, machine tool coolant pumps, and spindles. This will reduce energy usage significantly over time. A person might or might not remember to shut off a machine during lunch or breaks, but if a robot is programmed to do that, it always will.’‘

The ability of the robot controller to manage all aspects of the work cell makes way for more efficient use of energy. Michael Calardo, Vice President for Product Management at ABB Inc. speaks on the role robotic controllers have in lowering energy costs. ABB is a robot manufacturer and systems integrator located in Auburn Hills, Michigan.

‘‘Robots have improved control of motion, so there is a lot of energy savings because acceleration and deceleration are done in a much more controlled way,’‘ Calardo says. Calardo adds that this improvement comes from more sophisticated algorithms in control technology.

Calardo went on to say that the change to direct current control of weld guns from standard 60 cycle alternating current is a source of energy saving in robotic work cells. ‘‘Direct current weld guns run at 1,000 Hertz instead of 60 Hertz. This reduces the size of transformers and the size of cables used, which is less weight the robot arm has to carry,’‘ Calardo says. A lighter-weight robot arm translates into less energy used and a higher payload capacity.

Efficiencies
Depending on the application being integrated, robots can reduce the energy cost of production.

‘‘Robots are very energy efficient. The energy cost to run a robot can be less than a dollar a day, depending on the application,’‘ Motoman’s Chris Anderson says. Randy Schuetz, the coating technology leader at Motoman, maintains that robotic painting calls for less energy use than that of manual painting or even that of fixed painting automation systems.

‘‘There are reduced exhaust air and make-up air requirements for robotic spray booths. A typical
manual spray booth requires an airflow velocity of 100 feet per minute whereas less than 60 feet per minute is required by robotic equipment.’‘ The equipment that provides air flow to robotic paint booths needs to deliver less than 60 percent of that air, so less energy is required to perform its task.

Material handling is another application where robots could assist in achieving energy cost savings. Dick Johnson of FANUC Robotics speaks of this. ‘‘Large payload material handling saves the most energy. FANUC Robotics installed a robotic system replacing fixed automation that was hydraulically controlled. An electric robot, when not moving, shuts itself off, so very little energy is being used,’‘ Johnson says. Johnson went on to explain that the original equipment had a standard hydraulic pump that pressurized fluid to perform work.

‘‘When the system is not working, the fluid is dumped over a pressure relief valve which caused the fluid to heat. There is a chiller that cools that hydraulic fluid. One can argue that the system used more energy when not working than when it was working,’‘ Johnson says.

Spot welding is another energy-intensive application where robotics could help to bring energy cost under control. It is primarily due to the increased use of servo controlled weld guns over relatively inefficient pneumatic weld guns.

End effectors are a significant element within work cells and the energy they consume is not trivial. To lower energy costs, a good place to do that is through end effectors.

Andy Lovell, application engineer at PIAB Vacuum Products, Hingham, Massachusetts, an end-of-arm-tooling provider, addresses energy efficient end effectors. ‘‘If designers can build an end effector to do the work required of it and can make it light weight and as simple as possible, that translates back to the robot becoming lighter in weight and easier to maneuver,’‘ Lovell says.

Systems integrators have to take into account the mass of the product being produced as well as the mass of the end effector handling the product. ‘‘Having a small, light weight end effector impacts the size and the complexity of the robot. Smaller and lighter robots save energy through down-sizing,’‘ Lovell adds. Using appropriate sized equipment saves weight, thus saving a lot of energy over time. 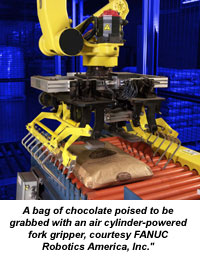 Johnson continues by recalling a work cell that used vacuum as a power source for end effectors. ‘‘One approach is to drive a vacuum motor that is placed near the robot’s base. In one work cell, FANUC Robotics had a palletizing robot using a vacuum plenum that picked up and palletized bags of product. It was relatively energy inefficient.’‘

Johnson explains the more energy efficient alternative system. ‘‘We replaced the plenum with a fork gripper that was powered by air cylinders. This is much more energy efficient,’‘ Johnson says. ‘‘Throughput increased from twelve bags per minute to 28 bags. This is a win-win arrangement, from both an energy point of view and throughput.’‘

Johnson adds that the vacuum-powered plenum system could hold the bag, but not firmly enough to convey it at high speeds. With forks, the bags were securely grabbed.

Waste Down, Productivity Up
Robots are the perfect solution to reduce both material waste and energy use simultaneously. James Cook of Stäubli connects the use of robotics with the reduction of wasted material and reduced energy.

Hard automation equipment sitting idle or having to rework parts waste both material and energy. All applications can benefit from the use of robotics. The savings of energy and the reduction of waste increase throughput, efficiency and profit.

Energy Futures
In the foreseeable future, the price of fossil fuels will most likely stay at the current historical highs or even climb further. Now is the time for manufacturers to consider strategies to produce their product while still making a profit. Smart companies will examine flexible robotics as part of that strategy. The robotics industry will meet that demand by making their products better, lighter, and faster. ABB’s Michael Calardo sees the robotics industry doing just that.

‘‘I see lighter weight smaller, and, trimmer robotic arms while increasing payload. Our goal is to improve that ratio,’‘ Calardo says. ‘‘The more the ratio between the arm’s weight and its payload can be improved, the more energy efficient the robot is.’‘ That improved ratio of a less dense but stiffer robotic arm combined with advances in control algorithms, will lead to even greater energy efficiency through robotics.

Editor’s Note – Editor’s note - For more information, you may contact any of the experts listed in this article or visit Robotics Online, Tech Papers.

Productivity Up and the Lights Off at Wagner Machine Company