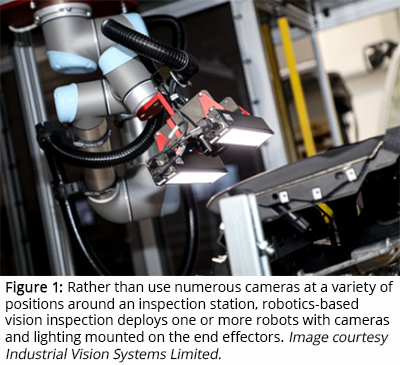 Due to the highly customized nature of automotive manufacturing, machine vision inspection systems must be built to detect defects on a number of variants of a single subassembly.

To meet this requirement, integrators have developed sophisticated systems comprising numerous cameras mounted on a fixed frame, positioned to capture many images of the product for quality assurance purposes. The use of multiple cameras and lights in these systems produces images of the complex assemblies viewable from different angles and under different lighting conditions.

Not only are such vision inspection stations highly effective at detecting defects of subassemblies on automotive production lines, they typically do so in a matter of seconds. But today’s automakers are demanding an even more flexible approach in vision inspection process to address the increasing number of product variants.

Here, the advantage of robotics comes to the fore. Robotic-based vision inspection deploys one or more robots with cameras and lighting mounted on the end effectors (Figure 1), which automatically move to key inspection points of a subassembly to check specific features. After the inspection points have been selected, vision software can then be programmed to inspect the locations on any subsequent product presented to it. If another product variant with its corresponding new inspection points has to be checked at a later stage, camera setup and reprogramming require less time than a fixed-frame vision inspection system.

When to Recommend Robot-based Vision
According to Mike Sirizzotti, Vice President of Vista Solutions, automakers must consider several factors when deciding between a fixed-frame or robot-based vision inspection system. One critical aspect is to evaluate the existing and future needs of the inspection systems, which involves determining the amount of plant floor real estate available to accommodate the inspection solution. Other more complex issues that may determine which system to choose include the need for performing a 2D or 3D inspection, the number of points to be inspected, the cycle time, the optical and resolution requirements and, perhaps most importantly, the budget.

Shawn Campion, President and CEO of Integro Technologies, adds that it is also important to determine whether the part or assembly can be inspected with visible color or monochromatic cameras, or if other spectral response cameras such as near-infrared (NIR), thermal, and hyperspectral are necessary. If so, systems integrators must ascertain whether these cameras are required at multiple points within the inspection cell or used at unique positions. If multiple cameras are required, the integrator then has to determine if the robotic system can carry the required payload and associated lighting packages without interfering with the system’s kinematics.

In some instances, Sirizzotti says, a multiple smart camera solution becomes quickly cost-prohibitive and developing a flexible robotic solution is the better choice. But he acknowledges that the decision depends on whether the part or assembly can be inspected in such a fashion, whether an appropriate cycle time can be met, and if a robotic system can be integrated into an existing manufacturing process.

Other situations may only accommodate a system with a small footprint. “While an ideal solution might include a robotic inspection system that yields more reliable inspection results because the field of view of the camera and perspective can be tailored,” Sirizzotti says, “if space is restricted, a fixed solution may need to be employed, albeit that some sacrifices may need to be made in the type of inspection that can be performed.”

Capitalize on Existing Vision Inspection Systems
Tom Brennan, President of Artemis Vision, agrees with Sirizzotti and Campion that space and cycle time are key in deciding which approach to take. Brennan also looks to inexpensively increase the flexibility and capability of a fixed-frame solution before adding motion and robotics.

“If all processing is done on a single industrial PC and the cameras are not smart cameras but regular cameras, more resolution can fit in the budget,” Brennan says. “Additionally, using a liquid lens to change focus electronically or using a mirror can mitigate motion needs.”

Brennan notes that a robotic system can be the best option because of the resolution and number of inspections required, or when the lighting banks needed to cover the area of interest become excessive or clearance issues emerge with fixed-frame system. 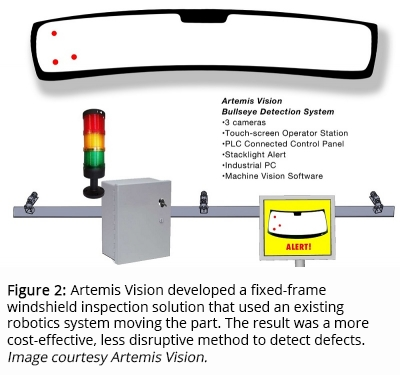 As an alternative to a fixed-frame or robotic-based system, Brennan says a third option is to move the part or assembly itself, but this approach is rare since a gripper to pick up the part now has to be considered.

If a part is already being manipulated elsewhere, however, that task can be leveraged in building the inspection system. “Sometimes the motion you need exists in another part of the process, so we always recommend looking in detail at the entire line before adding motion systems and other steps,” Brennan says.

He cites a fixed-frame windshield inspection solution that Artemis developed for an automotive customer (Figure 2) utilizing an existing robotic system moving the part. “In doing so, we solved the problem in the most cost-effective and least disruptive way,” Brennan says.

Integro’s Campion acknowledges that while robotic cells do provide greater flexibility, they also have higher implementation and maintenance costs. If a new part or inspection requirement is introduced, for example, an alternative teach point (pose) needs to be added, potentially with a supplemental vision toolset and an alternative light source and/or settings.

"The focal range and characteristics of the optical package of the robotic onboard camera need to be accounted for on all inspections,” Campion says. “This sometimes requires that two engineering resources — a vision engineer and a control engineer — are present to implement and test the system, thereby slowing and increasing implementation costs.

“The robotic system programmer must also account for the robotic manipulator kinematics through the inspection position sequences to avoid singularities — or points in the workspace where the robot loses its ability to move the end effector in a given direction no matter how it moves its joints — and robot error recovery,” Campion continues.

For its part, Integro Technologies has implemented a number of motor and transmission assembly verification cells for the automotive industry. In a recent project, the customer initially targeted the use of a collaborative robot for a multipoint inspection cell on an existing, significantly space-constrained manufacturing line where inspection cycle time was narrow. Working through a complete decision matrix and discussion points, Integro and its customer agreed to implement a 13-camera fixed-mount inspection system.

The companies reached the decision after determining there was inadequate space for the robot to move for the required optical working distances. Additionally, a restrictive window was allotted on the production line for the machine cycle time, and the cost of implementation was lower.

Where fixed-frame vision solutions fall short, robotic-based vision systems solve many of the inspection requirements demanded by automakers. Given the number of automotive product variants expected to rise and the corresponding growth in subassembly complexity, machine vision OEMs and integrators are developing vision-equipped robot inspection solutions that detect even the smallest defects at faster, more accurate rates than ever before.