Robotic Machining On Tap for Aerospace

A thin stream of water slices through 8 inches of titanium like it was butter. Driving the process is a six-axis robot that painstakingly maneuvers the waterjet nozzle across the part, shaping the graceful contours of jet engine airfoils with ease. You have to see it, to believe it.

Robotic machining has come a long way. Robots have proven to be robust and accurate enough to achieve the demanding tolerances required by the aerospace industry. In this case, they’ve done it with help from a waterborne solution.

In the first part of the video noted previously, a robotic waterjet system is rough cutting a titanium blisk, or integrated bladed rotor (IBR), for a commercial jet engine. With just tap water mixed with abrasive media and shot out of a small orifice at ultra-high velocity, this robotic waterjet system can cut through solid metal up to a foot thick.

Aquarese is part of the SHAPE family of companies focused on waterjet cutting solutions and integrated systems, along with Flow International Corporation, which manufacturers the ultrahigh-pressure pumps and waterjet technology. Aquarese integrates Flow’s technology with advanced robotics to provide turnkey solutions for its aerospace, energy, and automotive customers. 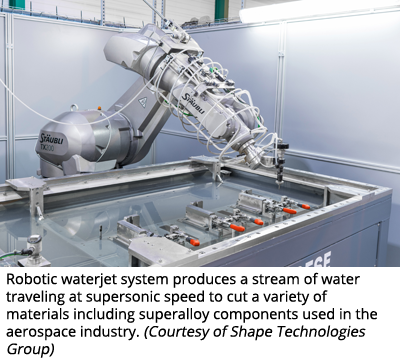 Smooth Moves
The robot brings flexibility and smooth motion to the waterjet process. With six degrees of freedom, the articulated arm can approach the workpiece from virtually any angle and follow a smooth, accurate, and highly repeatable toolpath to create precision cuts and contours. In metal cutting applications, the waterjet typically rough-cuts the components, which subsequently undergo final milling operations.

“One of the primary benefits of waterjet is that it’s extremely versatile,” says Howes. “You can cut metal, composites, glass, stone, paper, food, just about anything. With waterjet, you could be cutting metal one day and cutting foam the next day on the same machine.”

Aquarese systems are used to cut titanium alloys, Inconel, Ni-based alloys, other superalloys, stainless steels, and composites. Abrasive waterjet is required for cutting metals. Garnet is used as the abrasive media in 99 percent of abrasive waterjet applications. Water and garnet exit the waterjet cutting head at nearly four times the speed of sound to increase cutting power by 1,000 times.

Despite its immense power, robotic waterjet machining is a cold-cutting process, so there’s no heat-affected zone (HAZ) or thermal fatigue. This is an advantage over laser and plasma cutting. Howes says there is no mechanical stress on the part, so part integrity is not compromised and only light fixturing is required, as compared to milling or conventional machining.

“Waterjet is more efficient than rough milling or wire EDM (electrical discharge machining),” says Howes. “It’s much faster, has a lower operating cost, and produces large offcuts which are easier to recycle than the chips that you get from a milling operation.”

The waterjet process is chemical-free and environmentally friendly. The water, as well as any garnet used as an abrasive, can be recycled.

“There are no hazardous fumes,” says Howes. “You can use closed-loop water systems. There’s none of the dross waste you would find in a laser or plasma application.” 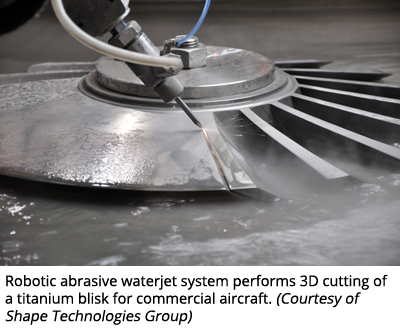 “We use Stäubli, particularly for this cutting application, because of its robustness and path accuracy,” says Howes. “We worked closely with Stäubli to refine this process for our needs and it’s been a great partnership.”

Traditionally, robotic waterjet has been more common for softer materials and other industries. Now we’re seeing it in the aerospace industry for cutting metals and composites.

“It’s become a more common application because now we can achieve better performance,” says Sebastien Schmitt, North American Robotics Division Manager for Stäubli Corporation in Duncan, South Carolina. “We’ve made so much progress with the rigidity of the arm and precision. It makes it possible today to work within that domain.

“Accuracy, repeatability, rigidity, all this comes from our patented gear box that we manufacture and design in-house,” continues Schmitt. “We’re the only robot manufacturer that designs its own gear box. That gives us superior trajectory performance.”

The robot is a high-payload 100 kg model, which Schmitt says you need for rigidity. But it’s also important for the counterforce from the ultrahigh-pressure waterjet. Aquarese found minimal to no pushback with the Stäubli robots. Imagine the kickback you might get from a fire hose when you turn it off and on. Not from these systems.

“The fact that we are rigid, very precise, very repeatable gives you the ability to push the edge of performance,” says Schmitt, noting they are now able to compete with traditional milling methods. “The cost of a 5-axis CNC machine is three or four times the cost of a system like you see here.”

Aquarese is using a Stäubli TX200 HE robot (pictured). The HE stands for humid environment. This robot was developed specifically for wet environments. The enclosed arm structure is IP65 rated and reinforced by arm suppression for added waterproofing. The IP67 rated wrist is corrosion resistant and protected against low-pressure immersion. The tool flange and critical parts are made of stainless steel to hold up in corrosive environments. 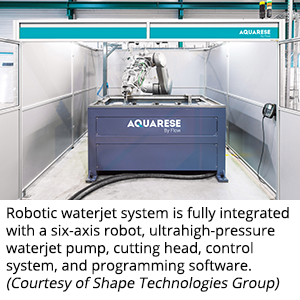 Longevity is also important, especially when your robot is working in harsh environments like abrasive waterjet applications.

“You’re making an investment for years to come,” says Schmitt. “That’s something Stäubli is known for, to be able to maintain our quality for many years. We have systems that have been working for 20 years and still performing like day one.”

Stäubli’s proprietary robot programming language, VAL 3, is optimized for compatibility with CAD-to-path software. According to SHAPE’s Howes, it’s a very simple process to import a CAD model and generate an optimized toolpath. The waterjet systems are programmed using SHAPE’s own software suite called FlowXpert, which comes bundled with the system. For 3D robotic waterjet cutting, the AquaCAM3D module is also supplied, which has built-in modules and functions for specific applications, including roughing of blisks and trimming of fan blades. AquaCAM3D is optimized to work seamlessly with Stäubli robots and export the generated toolpath.

Material Savings
Material savings is a major advantage of robotic waterjet. Turning our attention to the video again, at 35 seconds into the footage, you can watch 3D nesting with robotic waterjet. In this application, the process is roughing out two turbine blades from one bar of lightweight alloy.

“For one slug, you get two parts that are near net shape before final machining and grinding,” says Howes. “This is a huge advantage with waterjet because you’re using 3D nesting which can’t be done with milling. The only other way you can do this is with wire EDM, which is very expensive.”

You can also use common cut lines when cutting sheet metal. The waterjet’s thin cutting width, ranging from 0.003 to 0.015 inches for a pure waterjet stream and 0.015 to 0.070 inches for abrasive waterjet, allows for intricate detail. Howes says you can’t do this efficiently with conventional machining where the kerf, or width of the cut, is too wide. Common cut lines, 3D nesting, and larger offcuts all provide significant material savings.

Aquarese also integrates robotic waterjet stripping solutions for coating removal on aircraft engine parts, including boosters and combustors for the maintenance, repair and overhaul (MRO) sector. They also have systems for ceramic shell and core removal for investment casting foundries typically in the aerospace or industrial gas turbine market. 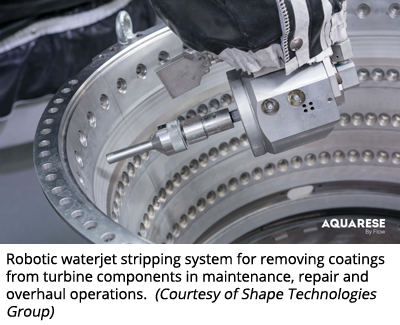 “We can also integrate the core removal systems with cutting solutions for de-gating, as well as systems for removing the flashing from forged materials,” says Howes. “All of these are robotic applications.”

Researching Enabling Technologies
Still, robotic machining, whether with waterjet or more conventional means, has its limitations when it comes to rigidity and accuracy. Researchers are exploring novel ways to address these limitations.

Research is underway at the recently inaugurated Boeing Manufacturing Development Center (BMDC) on the campus of Georgia Institute of Technology in Atlanta. The BMDC is focused on implementing industrial automation in non-traditional ways, such as shimless machining. The center is located in the 19,000-square-foot Delta Advanced Manufacturing Pilot Facility (AMPF).

Although the ribbon cutting for the center was just held in June, Georgia Tech’s strategic partnership with Boeing is in its tenth year according to Shreyes Melkote, Associate Director of the Georgia Tech Manufacturing Institute and Morris M. Bryan, Jr. Professor of Mechanical Engineering for Advanced Manufacturing Systems at Georgia Tech.

“The AMPF is a translational research facility focused on discrete parts manufacturing where we work with industry to take ideas and technology developed in the lab and translate or tailor them to applications that might be of use to the industry sponsor (in this case, Boeing),” says Melkote, who is also an affiliated member of Georgia Tech’s Institute for Robotics and Intelligent Machines, where he serves as a bridge between manufacturing and the robotics and automation area.

Melkote’s research focuses on robotic milling. His objective is to use enabling technologies to allow robots to produce more complex features and surfaces, and to do it with a high degree of accuracy.

“Lack of stiffness and accuracy are limitations that still need to be overcome,” says Melkote. “Technologies such as sensing, compensation, and metrology addressing stiffness and the limitations of articulated arm robots are what we’ve been working on for the last 4 or 5 years.” 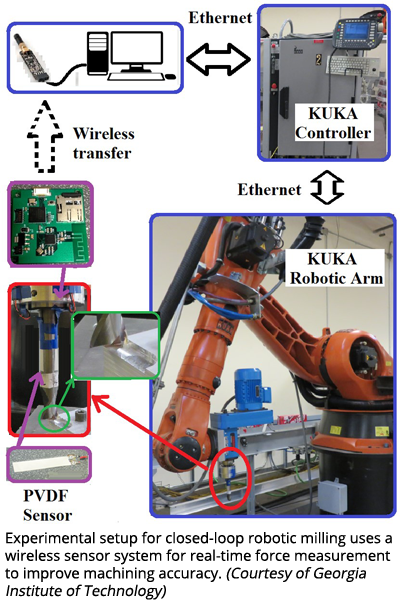 For example, Melkote says they are using laser tracking devices and other types of metrology systems, along with in-process sensing of forces to help address accuracy issues when using robots in high-force applications. Some of these findings have been published in journals.

In the paper “A Wireless Force-Sensing and Model-Based Approach for Enhancement of Machining Accuracy in Robotic Milling,” Melkote and fellow researchers at Georgia Tech test a new hybrid method that combines wireless force sensing with a mechanistic model of the milling forces to increase the accuracy of robotic milling while preserving its flexibility. Milling experiments are conducted with a high-payload articulated robot (pictured) and a wireless polyvinylidene fluoride (PVDF) sensor system for real-time force measurement. The results show significant improvement, over 70 percent, in the dimensional accuracy of simple geometric features machined by the new method.

“Robotic machining could offer a lower-cost and more flexible, versatile technology for enabling assembly of aerospace components,” says Melkote. “We’re exploring how we can use other technologies, like metrology, to compensate for the limitations and achieve the tolerance requirements that the aerospace industry needs.”

Other research underway on the Georgia Tech campus includes teaching robots tasks through human demonstration and exploring the use of robots as flexible fixturing devices. Robotic-assisted manufacturing will continue to be a focus for researchers as they help lead a resurgence in advanced manufacturing across the nation.