Most robots used for industrial manufacturing have articulated arms equipped with serial technology, where each axis is in line relative to the preceding one. In 1987 a new type of robot, the parallel kinematic robot (PKR), was designed and built by Karl-Erik Neumann. This type of robot has three or more linear axes which function parallel to one another. It has three prismatic actuators which control two rotational and one translational degree of freedom of the mobile platform. A conventional wrist is additionally mounted on the mobile platform. This resembles another device, the parallel kinematic machine (PKM), which is a machine tool with a spindle.

The result of the parallel design is a robot that has increased stability and arm rigidity, with faster cycle times than serial technology. One disadvantage of parallel kinematic robots is they tend to have a relatively large footprint-to-workspace ratio. There are some exceptions, such as the Tricept, but other devices, such as those based on the hexapod PKM, take up a sizable work area. Yet, many companies have successfully integrated PKRs and PKMs to assemble automobiles, food products and other items with performance results that easily justify the investment.

The initial challenge for this system was that it required computer power that was unavailable at the time. Karl-Erik Neumann, the inventor of the Tricept robot, explains: 'There was no control system to run the machine until 1992 when Comau Pico launched the first multiprocessor controller. That, and open architecture, made it so we could adapt its complex kinematics.'

Neumann founded Neos Robotics in Sweden, and Comau Pico USA of Southfield, MI, was a partner until recently. Neos Robotics has purchased another Swedish machining company, and now goes under the name of SMT Tricept.

Another type of parallel robot is the Delta robot, invented by Reymond Clavel (professor at EPFL - École Polytechnique Fédérale de Lausanne). According to Ilian Bonev of The Parallel Mechanisms Information Center, Laval University, Quebec City, QC, Canada, the Delta robot has three actuators which control all three translational degrees of freedom of the mobile platform. An additional linkage provides a rotational movement for the end-effector. The Delta robot is mostly used as a pick-and-place robot, although there exist some other applications, including machine tools. Unlike the Tricept, the Delta robot was licensed to various companies. In addition, some machine tool manufacturers managed to get their own patents and have built PKMs based on the Delta robot architecture.

'PKMs are mostly based on a hexapod (six-strut) configuration (Tricept has only three),' said Bonev. 'The hexapod, also called Stewart platform, is the most popular type of parallel robot. Almost all flight simulators are based on the hexapod design.' 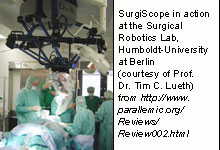 There are numerous examples of parallel kinematic devices, including:

Fast and Stiff FANUC
In an effort to exploit the benefits of parallel kinematics' speed and stiffness, various robotic makers have been producing them. FANUC Robotics North America of Rochester Hills, MI has been marketing such a robot for several years. The F-200i is capable of part and tool manipulation, part loading, welding applications, among others.

'The F-200i is very rigid when compared to serial linked robots. There is less flexing of the arms and high repeatability. With serial linked robots, the end-of-arm flexing errors are cumulative. In a parallel link structure they are averaged,' says Allen Grzebyk, manager of the F-200i program at FANUC. Compared to a serial link machine, this type of robot has a small range of motion due to the configuration of the axes, although it has a broad mix of applications. 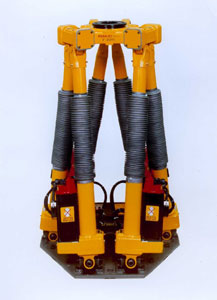 'FANUC's focus is in the automobile and general manufacturing industries. In car production, the F-200i is mostly used in the body shop,' continued Grzebyk.

In automobile production, the F-200i is used primarily to manipulate resistance weld guns, replacing dedicated hard automation. Customers are also using the F-200i in applications where an operator directly loads a part to the robot, and then the robot manipulates the part through an operation such as spot welding or dispensing. This method of processing saves floor space. Another automotive application has the F-200i used as flexible fixturing. Rather than having dedicated fixturing, customers mount locators and clamps to the units and program the position of the unit for part production. In the assembly of pickup truck boxes, the F-200i has proven to be valuable since it is able to load and locate end panel parts to three different lengths of boxes in one station.

'One tool can build various part types, providing flexibility. Because robots such as the F-200i can be reconfigured for different product tooling, there is reduced need to throw away tooling, providing convertibility. The F-200i provides a quick changeover of the end-of-arm-tooling and can easily reposition the tool,' said Grzebyk. One work cell could be flexible enough to manufacture part orders by both Ford and GM.

Outside the body shop, the F-200i can be found in a wide variety of applications. These include material removal chores such as milling, cutting, drilling, deflashing of sheet and cast metal parts, foam and adhesive dispensing, and pressroom centering tables. Other atypical applications for the F-200i include education, medical and scientific research uses. 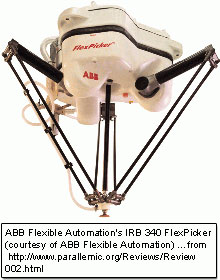 Flexing Stiff Muscles
ABB Flexible Automation of New Berlin, WI also markets a parallel kinematic robot. The IRB 340 Flexpicker system is a three or four axis (with a yawing gripper) robot that is designed for light assembly, material handling, and pick and place applications. This machine has three arms that are composed of lightweight reinforced carbon fiber. Using a vacuum gripper, the IRB 340 is able to pick and place product at 120 cycles per minute, should the object have a mass up to one kilogram. Acceleration velocities of up to 100 meters per second are possible, while maximum torque output is one N. Some of the lightweight items that this system is suitable for maneuvering include mechanical parts, electronic modules for personal computers and cell phones, along with pharmaceuticals, and foods. The IRB 340's off-line configuration ability yields flexibility in product changeover.

Cookies Before They Get to the Jar
How has the ABB system performed on line?

'We are satisfied with the Flexpicker's performance and reliability. We were able to fit robots into plants where they could not fit into in the past. This is due to the Flexpicker's small footprint,' said David Watson of Pepperidge Farms. Watson is the vice president of engineering at the Connecticut-based food processing company.

For several years, Pepperidge Farms had been using SCARA robots for both the sandwiching and pick and place applications in production of their Milano cookies. While SCARA's were adequate, the decision was made to switch to parallel kinematic machines when it came time to upgrade their robotic systems.

'The SCARA robots were designed for slow speeds and high payloads applications. It was over designed for picking up a lightweight cookie. The SCARA's could only perform 60 to 65 picks per minute, because there was so much inertia to overcome. The Flexpicker can perform 120 picks per minute per arm,' claimed Watson. Currently at Pepperidge Farms' Denver, PA manufacturing plant, there are 46 parallel kinematic robot arms performing sandwiching and packaging tasks. Of these, 32 were installed in 1999. Watson and his colleagues at Pepperidge Farms were impressed enough with the performance of the system to acquire the additional 14 the following year.

Integrator SIG Pack Systems AG and Pepperidge Farms set up the Flexpicker system so that the IRB 340 is suspended above the assembly line. This saves on floor space and facilitates a relatively short distance between the stream of cookies ready to be placed in paper cups. After the cookies undergo the sandwiching process, they are put onto a conveyor in multiple orientations. The conveyor runs parallel to the area where the arms place cookies into cups at a rate of 1,320 per minute. The Flexpicker picks up each cookie and places four of them on edge in the cup, then places a fifth one on top, laying flat. Next, three filled cups are packaged into a retail-sized bag. The end effecter, which is angled slightly to ease the placing of the product into the cups, has on it a vacuum gripper. The gripper gently lifts each cookie off the conveyor to minimize damage.

'Early on, we selected the Adept controller and vision system for all different robot applications, whether the application was using Adept arms or ABB's. All had common controllers and vision systems,' said Watson. Standardization was determined to be vitally important. 'The maintenance people were familiar with the software and vision systems as new technology and applications came in,' Watson continued. There are two vision cameras and one encoder on each robot arm. 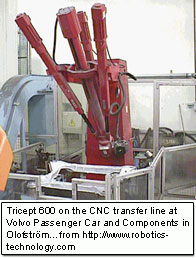 'Initially, I was working on a request from Swedish industry to produce a robotic cell for accurate assembly of relays in switchboards. There were a zillion types of relays and I was asked to design a flexible machine for their assembly. The idea came proverbially at 3:00 AM and I built a functional model. The goal was to get around the shortcomings of existing robots,' recalled Karl-Erik Neumann, founder of Neos Robotics and inventor of the tricept concept.

While initially conceived as an assembly robot, users in the field realized the Tricept's prowess as a machine tool.

'In 1999, we discovered from the market, that seventy percent of our robotic applications where machining. The machining requirement came from companies such as Boeing. They wanted CAD/CAM and 10 microns of repeatability, wanted it stiffer, have more power, while maintaining flexibility,' said Neumann. This market demand led Neos to introduce their model 805, a larger version of their tricept. This was developed as a machine tool robot, which combined the flexibility of a robot with the stiffness of a machine tool.

'For the last few years, we have been using them to go beyond robotics, and use them for metal cutting. The Tricept can also be used to hold laser and saw cutting tools, as well as friction welders,' declared Al Bolen, vice president of sales and marketing at PMC Machinery. PMC, headquartered in Northville, MI, markets Neos Robotics in North America. Customers who use Neos robots include automobile makers in Europe and North America. Peugeot, Ford, Renault, Volvo, General Motors, BMW, and Volkswagen are among them. The aerospace industry uses Tricept robots for fabricating propellers, turbine blades, impellers and any other item that requires a considerable amount of contouring. Other applications for the Tricept include assembly with thrust, deburring, polishing, woodworking, water-jet cutting and spot-welding.

What does the future hold for parallel kinematic robots? David Watson addressed this.

'We continue to look for more applications for them. Pepperidge Farms has many different products running on each production line so flexibility in these systems is absolutely critical. We are looking at the next generation of parallel kinematics that will have the ability to run more products and have the flexibility to do quick changeovers. We will be installing new parallel kinematic robots as new applications arise.'

Companies Mentioned in this Article