Walk down any aisle in any grocery store and you see it: food packaged by motion control technology. Food packaging machines fitted with as many as two dozen axes perform two to three levels of packaging on many of the foods we eat every day. “Compared to when I first started doing this years ago, the technology is so much better,” says Michael Weigandt, vice president and chief technology officer of food packaging machine builder Osgood Industries Inc. (Oldsmar, Florida). “The servos, the ease of use and implementation and programming is probably tenfold of what it used to be.” 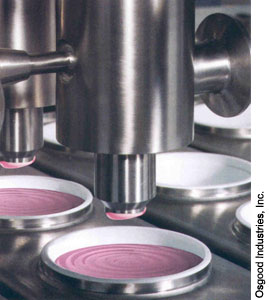 Servo motors allow Osgood machines to fill cups and containers with semi-fluid materials of various consistencies -- everything from ice cream to potato salad to coleslaw. Regular pumps would have problems handling such a wide range of material properties. Instead, servo-motor-controlled pumps provide a flexibility in the speed and acceleration of the filling pistons, increasing packaging throughput and accuracy.

Food processing and packaging provides a strong market for motion control but it also presents a very special set of challenges. Let’s take a closer look.

The Woes of Washdown
Perhaps the most important aspect of food processing and packaging is food safety. Ensuring sanitary conditions means continuously cleaning the equipment with water, steam and harsh cleaning products. While such methods are tough on bacteria, they’re even tougher on electronics like servo motors and encoders. “One of the hardest things in food processing is creating a sophisticated electrically driven product that can handle the heavy washdown required for food safety,” says Chris Wood, industry account manager for the food industry at SEW-Eurodrive (Lyman, South Carolina).

“In the food industry, the sanitation crew operates just like a fire department and it seems like a lot of the electrical things need to be the cleanest, so that’s one of the operating assumptions we use when we’re designing,” says Weigandt. With the recent spate of food contamination scares, food processors these days are taking sanitation to new levels and that means OEMs and component vendors alike face even more stringent challenges. “We’re finding that we have to add extra protection and use more washdown-rated components in areas where we wouldn’t normally use them because all the equipment is getting sanitized to even greater levels,” he says. “In a lot of instances, we’ll take a washdown-type motor and we’ll put it in a NEMA 4X enclosure because one of the latest trends we’ve seen is that in areas where they would never wash down before, they’re actually opening up the machine internal components and washing those on a periodic basis.”

Weigandt likens it to opening up your car hood and steam-cleaning the engine once a week -- yes, it’s designed to get wet, but not that wet. Servo motors feature a minimum of two cable connections plus a shaft, all of which present entry risks for fluids. Osgood starts by adding an extra seal to the shaft; in addition, they put the motor housing under positive pressure to minimize condensation, which can cause problems with feedback. “That’s probably the biggest problem area we have,” he says. “Both encoder and resolver are weak links and I don’t think it matters what brand it is when you’re blasting it with a hose consistently. It’s very tough to defeat the ‘fire department.’”

The Technology Shadow
One of the biggest difficulties in the food packaging arena has nothing to do with washdown or wear -- it’s the challenge of building a machine that is sophisticated enough to get the job done, but simple enough to be compatible with the skill levels of operators and maintenance staff more comfortable with all-mechanical designs. “The end customers want the latest technology and they want it to be fast and quick and economical, which brings in complexity,” says Woods. “Unfortunately, a lot of times the operators in these facilities are not all that adept at handling complex equipment. It’s a real dilemma because customers want it to be cutting edge but they also want it to be easy, and you can't really have both.”

It’s not just a question of operating the machine, Weigandt notes. “The technology we’re seeing more and more outpaces the ability of the plant to service it or understand it as far as troubleshooting goes. We have to keep trying to see how we can better design it for the maintenance side.” One approach is to install modems so that Osgood engineers can troubleshoot the networked systems from their offices. The problem? Plant IT staff won’t allow the modems because they’re concerned about compromising the larger plant networks. “In probably 50% to 75% of the plants, they won’t let them in,” he says. “That’s their job, to protect their internal networks, but the problem is that when something goes wrong, it may cost the plant tenfold or more in lost production because of that one decision. There’s a technology to help them out when their plant personnel can’t and yet they choose voluntarily not to.”

Instead, companies depend on their machine builder, but support staff can’t always get to a plant instantly; meanwhile revenue is being lost to downtime. One solution, which he says the IT departments seldom seem to take advantage of, is unplugging the modem except when needed for troubleshooting. 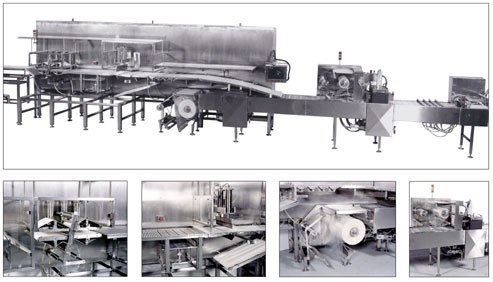 Sizing Matters
Sometimes, the very reputation of motion control can present an issue. Motion control offers significant flexibility in machine operation, making the technology appealing for producers wanting to switch rapidly and easily from product to product. “The ability of a servo motor and a controller to control motion is wonderful compared with what used to be done mechanically,” says Wood. “Before, you had cams and you had to change the stroke or change the sprocket ratio [to change the motion]. Motion control brings you the ability to control motion electrically. You’re only limited by what you can tell it to do and what it's capable of.”

The latter point is key. There can be a tendency to assume that servo flexibility means that a motor can do whatever it’s asked to do, but we know that’s not the case. If a motor is not properly sized to move a load, all the programming in the world won’t make it work. “Yes, you can make the controller or the program do anything,” Wood says, “but when you’re pumping amps into a motor and trying to make it turn the gear reducer to move something, if it’s not physically capable of doing it, it isn't going to happen.”

Motion control is fundamentally both an electrical and a mechanical process, he stresses. “The calculations that need to be done to overcome inertia, [to achieve] the speed, accuracy, and position are all mechanical calculations. People forget that you have to actually balance the inertia of the motor to the output shaft of the load, and they forget that the ratio between those two, and the size of the motor, and the inertia of the rotor have as much to do with [the motion] as the program, so a lot of times the electrical guy ends up fighting the machine because it wasn't mechanically correct. It's his job to make it work because, you know, you can do anything with a servo,” he adds wryly. “It’s very difficult sometimes to get the mechanical and electrical guys to actually work with each other to figure things out.”

Sizing can be just as much of a surprise to end users who are accustomed to mechanical designs. The price of servo flexibility is that it isn’t possible to use the same gearhead for all six axes of a packaging machine. Instead, it may require two different amplifiers and three or four different motors. Over-specifying one motor for all axes isn’t an answer, either. Quite aside from cost outlays, too much muscle can be as bad as too little.

Speaking of cost, more types of components means a larger, more expensive spare parts inventory -- assuming one exists. “When it comes to getting spare parts, the dollar cost of amps and motors is quite high relative to what people think it should be,” says Weigandt. “Then you run into a problem with [end users] not being willing to stock any spare parts for these types of devices.” Add to that the fact that many motors are not available off the shelf even when not customized, and you’ve got a problem waiting to happen.

Complexity Costs
Cost creates issues in other ways. Packaging end users understand the benefits of motion control and know that they want machines incorporating servos, to the point of even insisting on a given component manufacturer to their machine builders. The advantages compared to purely mechanical systems don’t come as a surprise -- but the pricing sure does. “People aren’t really aware of the cost,” says Weigandt. “Going to a servo machine versus a mechanical machine has increased our costs quite a bit and in this type of economy, it’s very tough to pass those costs on. It can cut into your margins. The manufacturers of the motion control devices can raise their prices fairly at will because once you’re using a brand, it’s very hard to switch to another -- you've invested a lot in training and programming and experience and setup. As an OEM, we’re stuck in the middle.”

The fact that packaging machines can be in the field for a decade or more only adds to the challenge. Weigandt is a fan of networked systems and is intrigued by smart components but he’s learned to be wary of hot new technologies, having been burned when sole-source suppliers went under or were acquired. “I know that there are certain areas where there’s a lot of innovation and some good things that would be nice to try but we can’t really do that. I’ve had guys working for me who decide we’re going to use this device on this machine and that device on the next machine. The problem is supporting all of these different devices, so we have to be very cautious.”

If the technology is too complex for the plant, the machine builder has to be able to step in, but if personnel has turned over and the engineer who knew that technology is no longer on staff, there could be problems. “In some ways, creativity gets slowed down. You can’t always afford to make everything with the latest technology.”

The benefits of motion control far outweigh those limitations, though. A case in point, the ice cream packaging machines that Osgood produced to fill 64-oz containers. Now, the industry is moving to 48-oz containers, and the Osgood machines are moving with them. “Some of our machine are out there for 10 or 15 years or more,” says Weigandt. “Having servos allows the equipment to run products that weren’t foreseen at the time we built the machine, without any re-engineering.”