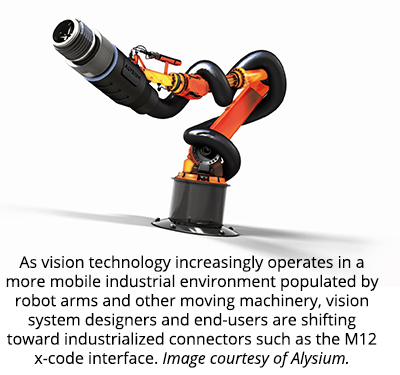 Specifying machine vision cables was easier a decade or two ago when industrial image sensors were smaller, generated less data, and were mounted less frequently on the end of moving platforms such as robotic arms.

Vision sensors and software have since become more sophisticated and their application more diverse, which spells opportunity for those who manufacture machine vision cabling. But this evolution has also increased demand for cables that can carry more data over longer distances, which presents new challenges.

Achieving “longer” and “faster” poses challenges because extending cable length can adversely impact signal strength and result in data loss. Industry’s never-ending pursuit of higher throughput, however, continues to make bandwidth the priority for machine vision integrators and cable manufacturers. This priority is evidenced by emerging standards such as the recent launch of CoaXPress (CXP) 2.0, which doubled the previous standard’s data rates to 12.5 Gbps per cable core. In a typical system with four cores (CXP12), that translates to a raw bitrate of 50 Gbps, or a sustainable image data rate of around 4.8 GB/s.

Meanwhile, says Thomas Detjen, head of Business and Product Development and Brand Marketing at Alysium, common standards such as Camera Link HS (CLHS) have shifted cables to fiber technology, which — compared to Coax or copper — offers unmatched bandwidth, stability, and flexibility for cables with outer diameters beginning around 3 mm.

Currently supporting 10.3 Gbps in each of its seven lanes, CLHS delivers the highest data densities of any vision standard; CLHS version 1.2 is expected to offer per-lane cable speeds of up to 15.9 Gbps. Such bandwidths lead Detjen to predict fiber’s application will eventually extend to all machine vision cabling applications and interface technologies, including Ethernet, USB, and even Coax cables.

Tricks of the Trade
Integrators often need to settle for longer, faster, and most cost-efficient. (“Cheaper” being too broad a term to be practical.) The USB3 consumer-grade interface, for example, offers theoretical data rates of up to 20 Gbps, making it reasonably fast. Designed for the consumer market, it also qualifies as cheaper by industrial cabling standards. That checks off two of the three boxes in Berst’s cable trifecta.

However, industrial users who sampled consumer-grade USB3 products in their applications quickly learned that inexpensive off-the-shelf cables were unreliable in terms of materials, shielding, flexibility, bandwidth, and particularly length. Designed to recharge or exchange data on personal electronics, consumer USB3 cable designs tend to be too short for industrial vision applications.

“If you have to mount an industrial camera with 5–8 meters or more of cable onto a robotic arm with a lot of noise in the system, consumer USB3 cables will not work,” says Detjen.

USB3 technology’s speed and near universal compatibility with virtually any PC have made it difficult for vision users to abandon the cable. So, cable makers such as Alysium kept the interface but applied tricks of the trade, like using larger wire gauges to combat voltage drop at longer lengths. Ironically, such solutions no longer met consumer standards. “Our cables don’t necessarily fulfill USB-IF testing, which maybe sounds strange, but only through that could we get cables up to 8 or even 10 meters without an active repeater system that produces undue stress and noise. For lengths above 10 meters or in very critical applications, we offer active optical assemblies that combine the best of two worlds in an industrial design: plug-and-play operation and power up to 50 meters through a very flexible 4-mm-thick cable.”

The noise typical of active cables arises from amplifiers and other electronics embedded in their construction. Tricks to control this noise include manipulating only the beginning portion of signal bits (pre-emphasis) to make them more recognizable to a digital receiver. Similar techniques, such as de-emphasis and equalization, applied at the receiver end can further sustain cable performance at longer lengths.

Such tricks helped CEI to develop a 20-m active USB3 vision cable for its customer Applied Vision that can transmit 100 million images at 70°C with zero frames dropped. The design proved reliable enough that the cables are now an integral part of Applied Vision’s Orion G6 and Volcano automated inspection systems targeting the food and beverage industry. Both systems were developed to minimize costly false rejects that often result from dropped frames.

Speed Testing
Rigorous validation testing was instrumental to the success of CEI’s USB3 cable design for Applied Vision, and it is a capability that is becoming increasingly valuable as vision cables get longer and data rates get faster. But validation of high-speed cables is neither a trivial exercise nor an inexpensive one.

“At today’s much higher speeds, process and craftsmanship become much more important,” says Berst. “If I found a customer was planning to buy some 75-ohm cable and some BNC connectors to make themselves a cable for CXP6, I’d be comfortable they’d be able to pull that off without too many problems. For CXP12, I’m here to tell you that you need a $60,000 oscilloscope and a $70,000 stripper and the experience to use both just to validate the cable.”

Part of the challenge with testing is that it is not enough to only weed out bad cables. Bit error rate testing can provide a simple pass/fail result, but it will not disclose why the cable was bad. Was it an issue with attenuation or insertion loss or impedance? The need for cable suppliers to isolate and correct problems with their products’ design, materials, and manufacturing helps explain why “cheaper” is a problematic addition to “longer” and “faster.”

Building Better Connections
Connectors are to cables what cables are to vision systems: an often overlooked but critical component. As the terminal link between cable and camera, connectors must maintain a reliable electrical and physical link. As with cables, this was easier a decade or two ago when cameras generally remained in a fixed position beside a production line. Many applications could get by using consumer interface standards such as USB or the RJ45 locking clips used with Ethernet cables.

As vision technology increasingly operates in a more mobile industrial environment, RJ45 connectors in particular are looking out of place — often literally — and end-users are shifting toward more industrialized alternatives such as the M12 interface. These connectors feature locking mechanisms that are more mechanically robust than their RJ45 counterparts, and they offer IP67-level resistance against dust and temporary immersion in water. They are also more compatible with cabling infrastructures already on factory floors.

“We’re seeing a migration of companies that want to extend their existing factory floor cabling infrastructure to their production lines,” says Berst. “So, we now have a line of industrial camera enclosures in which we’ve converted the RJ45 interface on the camera to an M12X-code connector because people also want a more robust connector.”

M8 and M12 cabling is commonly used in European production facilities as well, says Detjen, where it has been IEC standard for several years. “Camera makers are switching over,” he adds. “M12 is overengineered for standard applications where you have no need for dust- or water-resistance. But for industrial application where you have dust or water or high vibrations, there’s nothing better.”

It’s good to have options, however. For many of its cables, Alysium specifies custom connectors with more rigid internal design to increase their tolerance for mechanical movement. The company also molds contacts into its connectors for improved reliability and robustness. “Also, for RJ45, USB3, and CLHS, we specify a die cast aluminium housing around the connector that gives improved shielding because it’s metal and allows mechanical tolerances that are much more controllable,” says Detjen.

A Fine (Industrialized) Line
Machine vision engineers always walk a fine line between performance and cost. Their systems must deliver reliably consistent accuracy without being overengineered. The parameters of many applications often clearly define the baseline thresholds for camera, optics, and lighting, which can make it tempting to assume some wriggle room around cabling and connector specifications. But cables and connectors must not only support the vision system’s performance parameters, they must also withstand the physical rigors of the industrial environment. Further, when cables and connectors fail, it can be challenging to identify the problem and ensure it won’t happen again.

These factors needn’t make cabling another headache for vision system designers. They simply underscore that cables and connectors cannot afford to be your machine vision system’s weakest link.