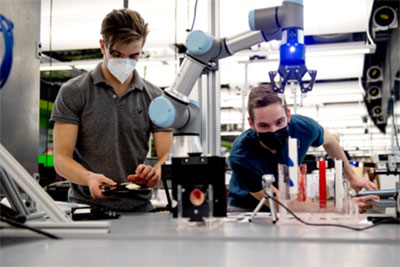 One of the quickest ways to get the average roboticist to run screaming from a room, says Chuck Brandt, Chief Technology Officer at the Advanced Robotics for Manufacturing (ARM) Institute, is to ask them to work with cloth – a notoriously difficult material for industrial robots to handle.

“This is why garment assembly facilities, not just in the United States, but around the world, still look like they came straight out of the 19th century with row after row of sewing machines manned by people,” Brandt observes.

Addressing this automation challenge is exactly the type of problem that the team at the ARM Institute enjoys taking on. As part of its commitment to developing future manufacturing technologies, the ARM Institute facilitated a collaboration between Siemens, Bluewater Defense, Sewbo, and the University of California Berkeley to create a new robotic assembly process that stiffens garment pieces by laminating its fabric with water-soluble thermoplastic polymer.

Since then, the ARM Institute has developed a system that can perform bottom hemming (the process of performing a circular stitch at the bottom of a T-shirt) and an automated quality assurance process for PPE (personal protective equipment).

“The longer-term goal is to bring manufacturing back to the U.S. Once you bring robotics to bear, it enables more productivity per employee and improves working conditions,” says Brandt.

With the manufacturing sector itself undergoing fundamental change, artificial intelligence and flexible robotic systems have emerged as key technologies.

“Manufacturing is transitioning from its traditional low mix/high volume setup to embrace greater customization through high mix/low volume manufacturing processes. This creates a need for robotic systems that can adapt quickly and smartly as different products come down the line. We're not quite there yet in technological terms, but it's going to happen,” says Brandt.

Manufacturing is just about to start seeing the impact of AI in factories, says Sina Afrooze, CEO of Vancouver, Canada-based Apera AI, a firm that specializes in AI-based robotic vision applications.

“A lot of companies have started exploring inspection already. But other manufacturing jobs, such as assembly, bin picking, feeding, and machine tending, have not historically been a great candidate for AI-based applications. And as a result, manufacturers have not realized their full automation potential.” 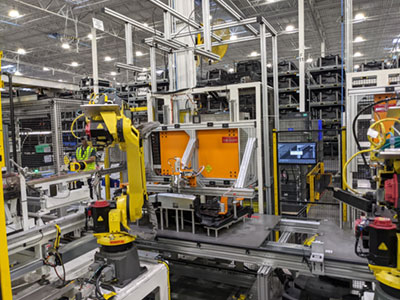 Apera AI has developed a technology that enables robot guidance in 3D, powered by AI. The firm’s short-term focus, says Afrooze, is on providing its customers with a complete suite of technologies, including high-value tasks that have traditionally been way beyond the capabilities of industrial automation systems.

“We want to bring a wide range of tasks to the table from locating and path planning to intelligent grasping and in-hand inspections, as opposed to classical inspection setups where parts are moving on a conveyor and the cameras just take a snapshot as the parts move by,” says Afrooze.

Apera AI is on its second generation of vision intelligence, dubbed “4D Vision,” and has also developed motion and grasp planning solutions. The company’s next step is an AI-powered inspection solution Apera Inspect, which the company expects to release in 2023. The final result will be a complete suite of human-like skills to support manufacturing applications.

A little further down the line, says Afrooze, we can expect to see more systems that incorporate creative problem-solving capabilities.

“A task like bin-picking ends up becoming a bit of a challenge for robots, which have difficulty grasping parts from bins accurately. Humans can do this easily. This is where the technology going to go. AI is going to really take over motion planning, grasp planning, and coming up with learned policies that will automatically guide the robots through different situations.”

Afrooze expects to see the cost of industrial robots fall at the same time as they grow in intelligence.

“That will suddenly open companies up to all sorts of applications where a robot would not have perhaps been considered either because it was too expensive to justify the investment. But when costs really come down, it completely changes the game.” 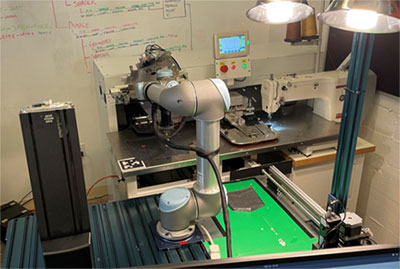 Much of the ARM Institute’s work is focused on smart robotics – an area where Brandt expects to see rapid growth over the next few years.

“Everybody's seen the videos of long lines of industrial robots in the automotive world. That technology is all very mature. But those robots tend to do just one thing, extremely well, over and over again. They are not what you would necessarily mean by ‘smart robotics,’ because their ability to adapt is extremely limited.”

Inspired in part by the growing popularity of collaborative robots over the past decade, Brandt envisages a future manufacturing landscape where humans and robots collaborate safely and effectively using adaptive, flexible robot systems that can easily handle product line variations. And while automation has traditionally been the preserve of large companies, over the coming years Brandt expects small and medium sized businesses to adopt robotics at a growing rate.

Technologies like AI are going to change some of the ways we look at manufacturing and how we define and achieve varying levels of productivity, says Brandt, but expect to see new approaches and strategies on the workforce side too.

“There's no getting around that. And it's not a new phenomenon. Over the last several centuries, we’ve seen that as new technologies come and old ones get retired, the workforce shifts and adapts to what's basically a new reality. It's going to be fun.”