Trevor Jones of Thermo CRS agrees with Perreault for the need of more flexibility in biotech over non-biotech work cells. Jones is director of OEM business development at Thermo CRS, a system integrator and robot manufacturer in Burlington, Ontario.

‘‘The major difference between biotech and non-biotech material handling work cells is the use of software. Biotech applications require more flexibility than traditional material handling operations,’‘ Jones said. ‘‘In an industrial work cell, designers are much more concerned with achieving a fixed optimum output so they install dedicated end-effecters for achieving a single purpose at that time in a manufacturing plant.’‘

In biotech systems, software manages the throughput of each micro-titer plate to best utilize the available hardware. Biotech hardware has to deal with frequently changing assays. It is common to run multiple assays through a system simultaneously.

‘‘Motoman takes a novel approach to increasing the productivity of automated assays. (This includes) a compact work cell equipped with washers, dispensers, readers and incubators, serviced by a multitude of plate handlers. The availability of multiple plate-handling resources assures that plates are transferred between instruments immediately upon completion of each process, yielding the highest possible throughput,’‘ adds Craig Rubenstein, RobotWorld™ Sales Manager for Motoman Inc.

Lighter payloads are another difference between biotech and non-biotech material handling work cells. While assays frequently change in biotech, payloads, micro-titer plates, tends to remain constant. Industrial payloads change from one product to the next.

Goldenberg said that the central challenge is not the lack of the robot’s speed, rather the very small quantities of liquids being absorbed and dispensed. Robotics play a vital role in biotech microfluidics, the transferring or absorbing of very small quantities, measured in pico-liters.

Researchers often spend months creating assays to run experiments upon. These liquids are quite precious in that they are limited in quantity and require a lot of time and effort to produce. As such, these biological liquids require precise equipment to dispense them carefully in the myriad of experiments in which they will be used. This is where the use of robotics becomes crucial.

‘‘Experiments get miniaturized so researchers can shrink tests down to use a lower volume of chemicals,’‘ says Jones of Thermo CRS. For instance, liquid compounds to be tested for their therapeutic value are placed into standard 96-well plates. These assay plates are particularly suited to robotic handling because they are of a standardized size and shape. In most cases, SCARA robots will mix a specific combination of materials for researchers to determine if a reaction occurs. Because the combinations of assays are virtually limitless, a fast and precise means of dispensing promising compounds is necessary. Here is where biotech material handling robotics shines.

‘‘Our robots are capable of picking up assay plates and placing them on a working deck,’‘ Rudnicki said. ‘‘The robot’s arm can attach several tools, disposable pipettes tips and 384 pin arrays for compound transfer.’‘

A pipetter is used to dispense fluid from a compound reservoir to a plate or from one plate to another.

‘‘The robotic system is ideal for doing daughter plate replication, material dilution or dispensing liquids down to 0.5 micro-liters,’‘ explained Rudnicki.

Such a work cell appeals to researchers at the ICCB because of minimal waste of precious biomaterials. For added versatility, the robot can easily access a built-in incubator, an enclosed chilling box and an integrated plate reader. The latter is attached to the robot’s arm and is designed for rapid liquid dispensing. Harvard’s system is capable of compound transfer using a pin array, placing the plate into an incubator for a set time, removing it and adding another reagent. Finally, the robot puts the plate into a reader for analysis. 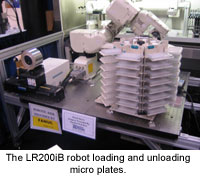 Most biotech firms that use robotics apply them to conduct experiments in the course of drug discovery or vaccine production. One company, BRANDEL, of Gaithersburg, Maryland, manufactures and integrates equipment that is used to grow the cells that are used by biotech companies for research. Brandel   integrates robots made by FANUC Robotics America, Inc, Rochester Hills, Michigan. The machine of choice for BRANDEL is FANUC Robotics’ LR Mate 200iB.

‘‘Some companies can grow cells, but that is usually short term, a day or two. We at Brandel use robots to help grow the cells in plates as do other companies, but we grow them for longer periods of time (21+ days) in a sterile environment,’‘ says Joseph Bertoncini, one of Brandel’s owners.  ‘‘The robot removes the plate from an incubator and places the plate into a bio-safety hood where old media is removed and fresh media is applied,’‘ Bertoncini added. This process has to be done every two days, for 21 days, to keep the cells alive and allow them to grow into a monolayer. ‘‘Target drugs are put into the media for incubation. Then, the robot places the compound into an analyzer,’‘ Bertoncini said. The analyzer then determines the type of reaction that was achieved.

This process has to be done every two days, for 21 days, to keep the cells alive. ‘‘Target drugs are put into the media for incubation. Then, the robot places the compound into an analyzer,’‘ Bertoncini said. The analyzer determines if a desired reaction has occurred.

‘‘Cell cultures are brought into laboratories in vessels that are often in awkward positions,’‘ said Midmac’s Perreault. ‘‘Biotech companies want to remove labor where conditions would be detrimental to an operator. These companies have a robot perform those tasks.’‘

Some ergonomic issues are related to manipulation of roller bottles. These containers have biomaterial in them as well as a reagent. Researchers add compounds, looking for a desired reaction. It is important to have these bottles rotated to ensure the biochemical contents are properly melded together. 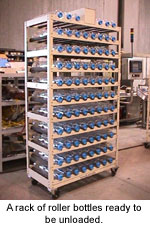 Aside from ergonomics, other issues relate to roller bottles. Gerald Vogt, general manager at Stäubli Unimation, Inc., Duncan, South Carolina, addressed the monotony issue connected with these ubiquitous pieces of laboratory glassware: ‘‘The robot does what the human did before. The advantage that the robot brings is in performing repetitive tasks, which improves quality.’‘

‘‘The robot will not contaminate the product within roller bottles, unlike a person,’‘ he said. For example, Stäubli’s roller bottle system includes a standard robot mounted on a base that is fully enclosed within a stainless steel housing. All the connectors are outside of the enclosure, making the robot easy to sterilize.

Vogt added that a biotech robotic work cell can run assays unattended, leaving researchers time to perform other tasks. This walk-away time also provides the ability to have assays run over the course of a weekend, so researchers can begin to pore over the data first thing Monday morning. Merck, the pharmaceutical corporation, used a Stäubli robotic roller bottle system to help develop its new chicken-pox vaccine.

Vogt claims that Stäubli’s roller bottle system is capable of handling up to 1,000 bottles a day per station. ‘‘The robot has all the flexibility of a human being, but also the smoothness of the motion to spread the contents of the roller bottles evenly over the bottle’s interior surface.’‘

Robotics ensure that laboratory workers are not exposed to biohazards.

‘‘There are safety issues when dealing with hazardous organic chemicals,’‘ said James Frost. ‘‘Bacteria, used in vaccine research or production, could pose a threat to laboratory workers.’‘ Frost is president of BioTX Automation, Inc., Conroe, Texas. BioTX specializes in the integration of end-effecters for Epson SCARA robots.

Quality vs. Quantity?
In manually handled biotech, a tradeoff often exists between quality and quantity. One of the primary justifications for investing in robotics is to eliminate this often difficult choice.

‘‘Automation -- particularly robust automation designs -- eliminates the need to choose between quantity and quality. Well-designed equipment can assure process repeatability and provide logging of each step of a complex assay. This process can operate at very high throughput without sacrificing the integrity of the assay,’‘ said Motoman’s Rubenstein.

Even as robots prove their versatility, the effect on quantity and quality always needs to be assessed.

‘‘Historically, the main reason to invest in biotech robotics has been quantity, in terms of the number samples manipulated per unit time. Robotics provide benefits in terms of quality, but throughput ranges,’‘ says Goldenberg of ESI.

For best results, all agree that success hinges on knowledge and expertise of process engineers and automation providers.

Likewise, Trevor Jones of Thermo CRS sees no need for a tradeoff between quality and quantity by investing in robotics for biotech material handling applications.

‘‘There is a changing trend away from HTS. Rather than HTS, there is high content screening (HCS),’‘ Jones said. The analogy that Jones used to illustrate his point is comparing a shotgun to a rifle.

‘‘HTS is a shotgun approach. Instead, HCS applies mathematical models so researchers can make rational decisions of what assays to run.’‘ Jones went on to say that HCS is a rifle approach, by creating a high content of information from relatively few assays.

‘‘Robotics is important in the rifle approach because of quality and to make the process consistent,’‘ Jones said. ‘‘In the past, the focus in biotech material handling robotics was on throughput, but now the emphasis is on quality.’‘

HTS, the shotgun approach, is described by Jones as ‘‘a numbers game’‘ because of nearly infinite chemical libraries. The HTS method is to throw many thousands of chemical compounds against a target pathogen to see if its cell growth accelerates, stops, or is eliminated.

‘‘The success rate of HTS is very low. That is the shotgun approach, which has mixed results. Some biotech research companies still utilize HTS,’‘ Jones observed, concluding that HCS, the rifle approach, is the way of the future.

Building a Bio-Tomorrow
Aside from the trend going from HTS to HCS, what other shifts are in store for biotech material handling robotics? 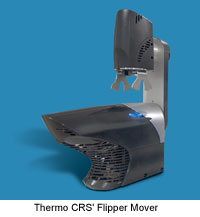 ‘‘Rather than a single articulated robot in the middle of a large sophisticated integrated system, Thermo CRS deploys several small robots with fewer degrees of freedom that load and unload instruments from a servo-controlled linear plate transporter,’‘ says Jones.

HSDM is a cluster of distributed elements, such as bidirectional servo conveyor belts. Robots moving along a track interfaces with equipment located on either side if the rail. The mover is simple and can maneuver in sequences as needed or as programmed.

‘‘Motoman’s RobotWorld AutoELISA is the model for a line of high productivity processing work cells. Leveraging the multi-head, parallel processing concept into other areas will provide similar benefits of higher utilization of each instrument, reduced instrument count, and higher processing throughput capacity,’‘ according to Motoman’s Rubenstein.

HSDM provides for higher throughput with higher reliability and consistency. This is getting the best of both HTS and HCS with few of their disadvantages, a must for biotech material handling robotic applications. Jones likened HSDM motion to that of an ant colony: ‘‘Each instrument works in concert with each other. Each piece is relatively simple, but in combination they do things that are synergistic.’‘ HSDM could be the model for other robotic applications.