Advanced automation technologies such as industrial robots continue to gain popularity around the globe as increasingly more companies look to automate processes, increase throughput, and ultimately increase revenue. Ease of use and adoption in new and expanding industries and markets are two major factors that have helped with global automation growth.

A3 figures from earlier this year show that robot orders were up 20% over the same quarter the year before, with substantial purchasing increases coming from metals (+86%); life sciences, pharmaceuticals, and biomed (+72%); food and consumer goods (+32%); and other nonautomotive industries (+12%). The figures also show that North American companies purchased 9,098 units at a value of $466 million in the first quarter of 2021, with nonautomotive companies purchasing 28% more robots than they did in Q1 2020. The first quarter of 2021 was the second-best quarter on record for nonautomotive orders, behind only Q4 of 2020. 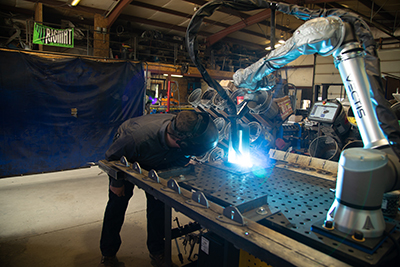 Perhaps one reason robots are being used in new and exciting areas is the fact that robot technology continues to evolve to solve new tasks and challenges. Collaborative robots (cobots), for example, solve different problems and accomplish different goals than traditional industrial robots. Collaborative robot company Universal Robots saw proof of this at the recent FABTECH trade show.

“Four years ago at this show we had one U.S. company exhibiting a cobot-powered arc welder, but this year there were five companies with systems based on UR robots, along with 15-plus systems doing demonstrations on the show floor,” said Joe Campbell, senior manager for strategic marketing and applications development with Universal Robots. “Cobots have become extremely popular in process-oriented applications like welding as well as cutting and surface finishing, such as grinding, sanding, and polishing.”

While the global COVID-19 pandemic had devastating financial ramifications for sectors such as the restaurant industry, it created opportunities for others. For many companies, the initial exposure to robots and automation technologies occurred out of necessity during COVID-19 lockdowns. “Companies all of types were faced with labor shortages during COVID-19, and these problems still exist today,” said Ed Mullen, vice president of sales for the Americas with Mobile Industrial Robots (MiR). “Robots give these companies an opportunity to replace that lower-end labor force with automation, and I don’t think a lot of these companies saw the full benefits of what this technology can do.”

He added, “Additionally, the holiday season is coming up, and logistics operations will have a hard time handling that rush without that labor force. We’ve seen the opportunity to put robots into places that we would have never done before, and with that, we’re seeing the acceleration of automation in these types of companies.” 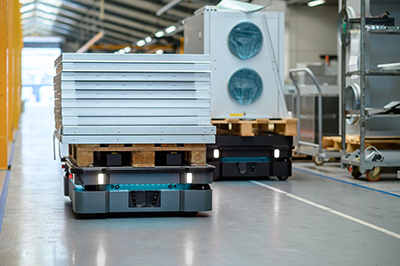 Companies are now using MiR robots for more than just moving material to production lines or moving end-of-line goods to shrink-wrapping, said Mullen. For example, MiR robots have seen increased use in tasks such as moving dunnage, which would have been done manually in the past.

In Europe, companies are still experiencing a labor shortage for certain tasks. Moving boxes that can weigh up to 15 kilograms, for example, can be both unsafe and undesirable for human employees, said Dieter Pletscher, sales manager for Kassow Robots.

“It’s quite difficult to find labor for many jobs out there right now, and in these cases robots offer a great alternative, which allows companies to keep products moving out the door while staying safe as well.”

Even in scenarios with no shortages of labor, automation not only helps improve the bottom line but also makes employees happier. For instance, paying an employee $20 or $30 an hour to move items from one side of a building to another — whether the items are trash or important components or parts — is an inefficient way to operate as a company, said Mullen.

“When companies begin setting themselves up to be competitive on a global footprint, these are the areas they can focus on, where they can take that one employee and allow them to become a machine operator and add value in other ways,” he said. “This adds more value to the company and makes the employee happier, and this is really what we are going after.” 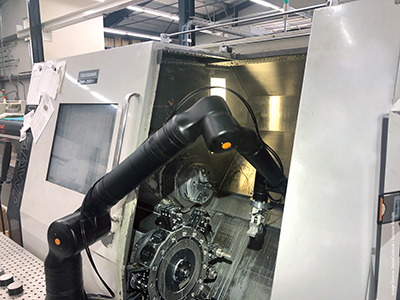 In some cases, automation technologies have helped companies deal with COVID-19 on an entirely different level. For example, when COVID-19 cases spiked in the U.S., a diagnostics manufacturer asked ESS Technologies Inc. to develop two filling systems with automated cap torque for diagnostics vials in COVID-19 test kits. The company required a system that could fill up to 120 vials per minute to keep up with demand.

The flexible filler and capper system created by ESS includes a circular puck conveyor that transports vials to an in-line filling system. A timing screw drive positions six vials simultaneously beneath a six-up diving nozzle assembly, which dispenses the precise amount of diagnostic reagent into the vials. The system uses FANUC SR-6iA SCARA robots and a cap feeder to automate cap placement. A three-up final torque station applies a precise amount of torque to the caps. During operation, the system can provide changeover in under 10 minutes.

A second diagnostics company had ESS Technologies build several end-of-line packaging systems comprised of 13 robots for collation, cartonning, and case packing of sterile test kits. The systems offer fast delivery times, which has allowed the manufacturer to ramp up its production capacity.

“Recent events such as the global outbreak of COVID-19 have highlighted both workforce and supply chain vulnerabilities,” said James Cooper, general manager of U.S. regional offices, the ASI network, the executive sales team, and CERT sales at FANUC America Corporation. “Automation technologies such as industrial and collaborative robots provide a way for companies to minimize the economic ramifications while still maintaining product quality and ultimately improving business.”

Automation technologies such as cobots evolve to meet growing and changing customer needs, and in the process, they become easier to use. End-of-arm tooling on cobots is one perfect example, according to Pletscher. “Cobots and end-of-arm tools have advanced to the point where they’re becoming more of a total solution for tasks such as screwing, polishing, sanding, and dispensing,” he said. “The increasing number of total solutions for given tasks makes it very easy for the integrator and end-user to integrate, and this is likely to continue.”

Similarly, in the UR+ ecosystem of third-party kits and components, Universal Robots offers a way for customers to become familiar with the capabilities of cobot technology without the risk of developing custom solutions. Recent trends have seen the UR+ platform moving toward application kits — near turnkey solutions in the form of kits instead of just end-of-arm tools, components, or accessories, said Campbell.

“Recent examples include Vectis Automation with its welding kit, which enables any welder to learn how to program and operate the robot, oftentimes in less than an hour,” said Campbell. “Robotiq has a kit for sanding that boils down complex programming for multi-pass contour sanding to about a 10-minute exercise.”

He added, “UR’s ActiNav system takes the whole bin-picking programming paradigm from what integrators tell us is often 200 to 300 hours of programming down to an hour.”

Looking toward future growth areas, artificial intelligence technologies could have a major impact on robot and cobot advances. For example, MiR continuously improves its sensors and planning algorithms, and AI will open up even more possibilities, said Mullen. “AI represents a potentially major differentiator in this space,” he said. “Adding intelligence to the robot so that it can anticipate aisle widths and anticipate traffic and personnel clogging areas will allow the robot to truly operate in this most efficient state.”

He continued, “The robot’s ability to learn from the map and the environment as it runs every hour makes it more effective, so integrating AI into the platform represents a major opportunity.”

Pletscher at Kassow Robots offered a similar sentiment, saying that as robots learn from the tasks they are performing, AI will continue to gain popularity in robotics applications of all types.