The use of a Real-Time Operating System (RTOS) is increasingly common in embedded software designs. An RTOS makes it easy to divide your code into smaller blocks, tasks, which execute seemingly in parallel and independent of each other, as described in the first article in the RTOS 101 series.

Having fully independent tasks is rarely possible in practice. In many cases, tasks need to be activated on a particular event, e.g., from an interrupt service routine or from another task requesting a service. In such cases, tasks often need to receive related input, i.e., parameters. Moreover, tasks often need to share hardware resources such as communication interfaces which can only be used by one task at a time, i.e. mutual exclusion, a type of synchronization. Inexperienced developers may try to use global variables for such purposes, but implementing thread-safe communication is tricky and a home-cooked solution may fail if a task-switch strikes at a critical point. For instance, consider this situation:

The initial loop (line 1) may seem to give exclusive access to the COM1 interface (line 3), but if using an RTOS this is often not a safe solution. It probably works most times, perhaps often enough to pass all testing, but if an interrupt strikes after the initial loop on line 1 but before the assignment at line 2 and this results in a task-switch, a second task could get into the critical section before the first task is finished. Implementing a thread-safe critical section requires either disabling interrupts or using special instructions for atomic “test-and-set”. Considering this, it is typically easier (and safer!) to use the RTOS services intended for this purpose.

IntervalZero’s RTOS provides two common types of mechanisms for safe communication and synchronization in between tasks and between interrupt routines and tasks:

However, as illustrated above, the blocking may become a lot longer if an unrelated medium-priority task (“Task M”) comes in and preempts Task L, thereby delaying the release of the mutex that Task H is waiting for. This phenomenon is called Priority Inversion. Most RTOS provide mutexes with “Priorty Inheritance” (or other similar protocols) which raises the scheduling priority the owner task if other higher priority tasks become blocked by the mutex, which avoids that medium-priority tasks interfere. Priority Inversion can also occur with queues and other similar primitives, as described in Customer Case: The mysterious watchdog reset.

Percepio Tracealyzer allows you to see most RTOS calls made by the application, including operations on semaphores and mutexes, in the vertical time-line of the main trace view, in parallel with the task scheduling, interrupts, and logged application events. 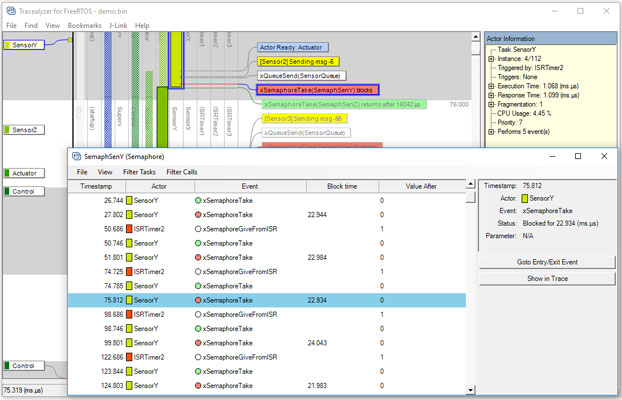 For queue objects, you also get a visual display of the number of messages in the buffer at any point, and you can even track messages from send to receive or vice versa. For mutex objects you see the name of the current owning task.

Tracealyzer also provides an overview of the interactions between tasks and interrupts via kernel objects such as queues, semaphores and mutexes. This gives a high-level illustration of the runtime architecture based on the trace, and you can even generate this for specified intervals in the trace. An example is shown below. Rectangles indicates tasks and interrupts, while ellipses indicate queues or semaphores. Mutexes are shown as hexagons. Since sometimes binary semaphores are used as mutexes, the classification of Mutexes are made based on their usage pattern, so semaphore objects may also be displayed with hexagons if they are used like a mutex, i.e., taken and given by the same task.

With Tracealyzer you get a superb solution for debugging, validation and performance analysis of RTOS-based embedded software. You get an exact picture of how the RTOS is executing your application, including the interactions between tasks via semaphores, mutexes and queues, as well as blocking and timeouts. This gives invaluable insight into the runtime world and facilitate development, validation and debugging of RTOS-based embedded software. Tracealyzer is also available for analysis of Linux systems.

Tracealyzer is available for IntervalZero’s RTX64 3.0 product. RTX64 is a key component of the IntervalZero RTOS Platform that comprises x86 and x64 multicore multiprocessors, Windows, and real-time Ethernet (e.g. EtherCAT or PROFINET) to outperform real-time hardware such as DSPs and radically reduce the development costs for systems that require determinism or hard real-time.

Precision Motion Control Technology - An Inside View at ACS

Pocket-sized motion controller for up to 64 axes

5 Things You Need to Know About Motion Control Systems