Vecow is a team of edge computing professionals. We are dedicated to designing, developing, producing, and selling industrial-grade computer products.

Safety, Reliability, and Robustness are the Cornerstones of Autonomous Vehicle Development Platforms

Building safe and robust advanced driver assistance systems (ADAS) and autonomous driving systems is so complex that no single manufacturer can single-handedly develop all of the necessary technology. Instead, there is an extensive ecosystem of partners, each working on a different aspect of the required technology.

Instead, there is an extensive ecosystem of partners, each working on different aspects of the required technology. 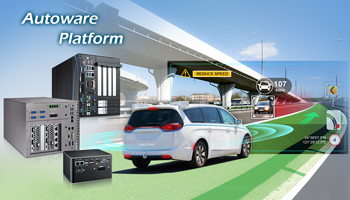 Without question, the integration of these subsystems is essential to the success of the autonomous vehicle market. And with the right development and testing platforms, developers can iteratively design, build, and test their ideas to more quickly and reliably take their ideas from concept to a proven and production-ready design.

A company developing ADAS and autonomous driving development tools recently came to Vecow for help in creating the hardware for their development and testing platform. Vecow is a leader in the design and production of industrial-grade computers for applications such as automotive and industrial AI.

Firstly, the platform needed to be designed for OEMs and Tier 1 suppliers. It also needed to provide integrated software and hardware for developing and verifying system functionality and performance. The platform also needed to be able to collect, synchronize, and analyze data from a wide range of cameras and other sensors.

With the variety of cameras and sensors that were to be used, the platform was going to be critical and it was important for the system to be able to support a full spectrum of interfaces. This ranges from serial port to CAN, CAN FD, FlexRay, LIN, Ethernet (i.e., for LiDAR), and USB, among others. There was also the need for flexible hardware with enough I/O to provide a sufficient number of each interface. As the list of sensors and cameras that are available continues to increase, the hardware interfaces and software drivers needed must be simple to integrate, allowing each new device to be quickly and easily supported.

One problem the OEM encountered in its initial efforts was difficulty finding a single industrial compute platform that could meet the needs of most of its automotive customers. Each vehicle manufacturer has to meet varying specifications for the different applications and markets being targeted. Having to build a specific compute platform for each customer would have substantially delayed the company’s ability to deliver their system. It would have also made it much more difficult to support each development platform in the field. Creating custom systems would have driven up their price and limited their ability to compete.

The use of a custom platform was also undesirable for manufacturers. When integrating systems together, it can be difficult to determine the requirements of each unique system, especially when every vehicle application is different. With a custom approach, manufacturers must determine what proper computing system has to be performed on a case-by-case basis. This introduces a delay in the development because the engineering team must assess the available technologies, define the custom system, then take the time to integrate the custom system before it can be tested and evaluated. Further complications to custom designs can cause setbacks, especially when ADAS and autonomous-drive technologies are evolving at a staggering pace, resulting in the constant change of application and market requirements.

To solve this problem, the platform company turned to Vecow to help define and build an industrial compute platform that would meet the varying hardware, software, power, and budget requirements of their customers.

The complexity of ADAS and autonomous-drive functionality meant that the platform had to deliver powerful computing and processing resources. Further complicating processing is that vehicles need to process a tremendous amount of data in real time to meet the strict responsiveness that is required of vehicles moving at high speeds.

To meet the interface requirements, the hardware needed rich and flexible I/O. Specifically, the platform needed multiple USB 2.0 and 3.0 ports for cameras, several PCIe slots for expansion cards, and multiple Mini PCIe slots for connecting to other hardware.

A cross-platform solution was also a must. While the system was mainly based on Windows and Linux operating systems (OS), it needed to support all of the in-house and third-party software that manufacturers use across different platforms, applications, and OS.

Power to the Automobile

Of special concern was in-vehicle power consumption and power protection. A development and testing platform needs to operate in a vehicle to collect real-world data. These systems also depend upon GPUs, which typically have high power consumption. One challenge with automotive applications is that higher power subsystems can impact safety. Specifically, if the ADAS and autonomous drive platform draws too much power, it could cause the system to crash or shutdown, putting the driver at risk. Thus, the platform needed to be able to operate reliably and robustly from the vehicle’s available power source.

The system architecture also needed to consider physical robustness. The system had to support a wide operating temperature given the various environmental conditions a vehicle may encounter during road testing and then in actual use. The hardware also had to be able to sustain the level of vibration and shock that could arise during use, such as when the emergency brakes are activated.

Optimizing a Consistent and Flexible Platform

Vecow worked with the partner company to define three hardware plus software solution platforms for its customers, dubbed the Autoware platforms. The entry-level platform is based on Vecow’s SPC-4020A embedded PC, based on an Intel Atom CPU. Designed for applications that need to collect a relatively small amount of data, it offers compact size, optimized power for in-vehicle operation, and a flexible range of interfaces (CAN, USB, and Mini PCIe).

For applications requiring more data collection and processing with real-time responsiveness, the RCX-1440R Advanced Autoware platform provides workstation-grade capabilities built on the Intel Core i7-97001 processor with Intel C246 chipset. With a customized backplane, the RCX-1440R can support a wider range of interfaces with a maximum power budget of 300 W.

For the most compute-intensive applications, Vecow offers the GPC-1000 Professional platform, capable of bringing real-time AI computing to the edge. With its Intel Xeon E-2278GE Processor with Intel C246 Chipset, the GPC-100 delivers a maximum power budget of 1500 W. This is enough to support multiple GPUs and makes it easy for developers to connect to and utilize GPU resources for video and AI processing applications.

All of these systems are optimized for in-vehicle operation, supporting a wide range of input power, surge protection, and ignition power control functionality. Each system supports fanless operation across the industrial temperature range and is EN50155 certified, with anti-shock and anti-vibration protection.

The systems have also been designed with flexible interfaces. Rather than building a custom platform, developers can configure these optimized systems to use the sensors and expansion cards of their choice. This also helps future-proof systems so they can support new sensors, cameras, and other subsystems as those devices become available.

The Building Blocks for ADAS and Autonomous Drive

These three systems provide a strong foundation upon which to build ADAS and autonomous drive systems. The choice between these three options simplifies the evaluation process for manufacturers when determining which platform to use. Because these platforms integrate a great deal of software with the hardware, evaluation is further accelerated. Furthermore, the availability of three platforms means manufacturers have the option to migrate to a more capable platform as their autonomous vehicle applications increase in capabilities and complexity.

Typically, ADAS and autonomous drive development is done locally but needs to be delivered to a global market. There are different regulations based on the various regions (US, UK, Spain, Sweden, Japan, China, and so on), so an autonomous car development and testing platform must be capable of reflecting these regional differences. The use of a consistent industrial compute platform simplifies the process of adapting the solution across regions, markets, and applications. For example, the flexibility of a platform enables developers to use the appropriate sensors and cameras for a target region, as well as accommodate new sensors and cameras.

To successfully develop autonomous vehicles that are safe and robust, manufacturers must disrupt the way they think about designing vehicles. It takes a high level of expertise to design hardware that provides enough processing capabilities while meeting the size and power constraints of vehicles safely and reliably. Many computer platform companies are focused on more general markets and, to meet the requirements of the automotive market, they have to customize their generic platforms for each application.

Vecow has been able to create an industrial compute platform optimized for the ADAS and autonomous drive industries because of its extensive work in the automotive arena and by listening carefully to its customers. For example, by spending a great deal of time studying the internal power requirements of GPUs and how to reliably and robustly meet these power demands, Vecow understands the range of capabilities these systems need to support and how to safely power them.