Robots Rack Up Productivity at Tru-Form

Founded in 1932, Tru-Form Steel and Wire, Inc. (Hartford City, IN) is a third-generation, family-owned and operated full-service fabrication company that now employs 100 people.  Two Tru-Form plants in Hartford City and one plant in Muncie all use robotic automation to fabricate and weld a wide variety of returnable metal racks for the automotive industry and other fabricated parts such as heavy equipment buckets.

As a fab house, we need the flexibility to produce a wide range of products and deliver them to our customers quickly, which means that we have to be able to do a lot more than just welding.  We also do cutting, punching, shearing, sawing and press braking operations, etc.,’‘ says Monty Tuttle, True-form’s Vice-President. 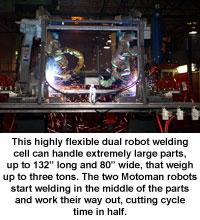 ‘‘Our industry is labor-intensive.  Automation is about the only thing that is keeping us competitive.  Through the use of automation, we are able to stay alive,’‘ said Jeff Tuttle, Tru-Form’s president, who is also Monty’s brother.  ‘‘We lost $20-30 million in business to China this year, but competing against foreign competitors with drastically lower labor costs is a challenge every single year,’‘ he continued.

‘‘We’re gaining on the ability to have very fast response, productivity, quality, and getting our product to market faster than the Chinese can,’‘ adds Monty Tuttle.

‘‘If you want to grow, you need automation,’‘ agrees Jeff Tuttle.  ‘‘If you want to pay the money, you can still find skilled welders now, but they are kind of a dying breed,’‘ he said.

‘‘By putting money into machines, you get a fixed asset on your books, along with reliable, consistent production of high-quality parts – and you don’t have to deal with healthcare issues and ‘‘intangibles’‘ like sick days and people not showing up for work,’‘ says Jeff Tuttle.  ‘‘Our business is so competitive that we need to eliminate or control as many as these variables as possible,’‘ he adds. 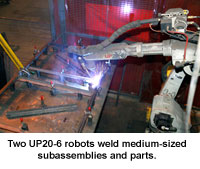 ‘‘On average, the robotic welders replaced two human welders per cell.  In some cases, the robot didn’t replace people, but production is more consistent with the robot,’‘ says Monty Tuttle.  ‘‘In some cases, a highly skilled human welder might be able to weld as many parts as a robot for the first part of the shift, say from 7 a.m to noon.  But later in the day, production goes down due to the fatigue factor.  A guy just gets tired.’‘ explains Monty Tuttle.

‘‘As long as you build your fixtures right, so that parts can only be loaded the proper way, you can use less-skilled operators for the robot cells.  Depending on the cycle, one operator can often service two robot cells,’‘ says Monty Tuttle.

‘‘Productivity increase varies depending on the cell and the job, but robots can increase productivity anywhere from 20 percent for a simple job up to 600 percent on jobs with a long welding process,’‘ adds Monty Tuttle.  ‘‘Average payback on the robot cells is about two years.  Using the robots also improves quality and reduces scrap by 20-30 percent.’‘

If the robot is unable to make a particular weld for some reason, an error message indicates specifically where the problem occurred so the part can be touched-up later.  If a human welder misses one of several hundred welds, it is possible that the error might not be noticed.

‘‘In our industry, inspection is all done by eye,’‘ says Monty Tuttle.

Tru-Form operates two 8-hour shifts, five (sometimes 6) days a week.  The company currently has 13 Motoman robots in 12 work cells operating in its three plants.  Nine of these robots are used for welding and the remaining four are used for material handling operations and R&D applications. 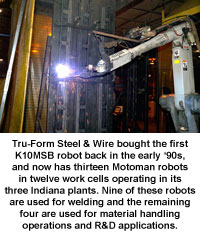 When New Venture Gear’s plant in Muncie went out of business, Tru-Form purchased 10 of their Motoman robots, and kept four of them.  They are currently developing ways to use these large six-axis SK120 handling robots for ‘‘jigless’‘ applications where the robots would position large pre-tacked parts for welding by other robots.

Tru-Form’s newest robot cell implemented in August 2006 uses dual six-axis HP50-20 Motoman robots and NX100 DR2C controller.  A single NX100 controller has the capability to control up to four robots (36 axes of control) using a single programming pendant.  However, the DR2C configuration that consists of two NX100s interfaced as a single controller with one programming pendant provides Tru-Form with the additional flexibility to separate the robots and have separate controllers for individual control, if desired

Very large racks and other parts are fixtured on two MHT-1500 headstock/tailstock positioners.  Each positioner has a 3,000 kg (6,614-lb) rated load.  This highly flexible robotic welding cell can handle extremely large parts, up 132’‘ long and 80’‘ wide, that weigh up to three tons.

‘‘The dual robots start welding in the middle of the parts and work their way out. This cuts our cycle time in half,’‘ says Monty Tuttle.

‘‘We do quite a lot of pulse welding on lighter 14- and 16-gage material with the new robots,’‘ he adds.  ‘‘Depending on the application, the robots have the flexibility to weave, touch-sense, seam-track or do standard GMAW or pulsed-MIG welding, ‘‘ explains Monty Tuttle.  Tru-Form uses Miller power sources, such as the Auto DeltaWeld 452 and Auto Axcess 450 models in the robotic welding cells, which also include pneumatic wire cutters and automatic torch cleaners.

‘‘We make a lot of dunnage racks used in the automotive industry, as well as subassemblies for these racks.  For example, these racks might be used to hold windshields, door assemblies, powertrain assemblies, engines, transmissions, etc.  Parts are primarily mild steel, from 0.5-in. to 16-gage thick.  We generally use standard  0.034’‘ to 0.45’‘ wire fed from a torch-mounted spool or 500-lb bulk dispenser.  Gas-assist mix is 90 percent Argon/10 percent CO2,’‘ explains Monty Tuttle.

‘‘Most of the welds are single-pass, ranging from 1/16-th in. to a foot long.  Depending on the product being run, a rack might have 10 to 600 welds.  Some of the big welds can total 500 inches, and some products have more than 900 inches of weld.  Although we use some flat stock and sheet metal in our products, the majority of what we weld is tubing.  The robots do quite a bit of circumferential welding around the tubular parts,’‘ adds Monty Tuttle.

‘‘Welding different gage metals, like 0.025’‘ material to 16-gage, can be challenging, especially on T-joints.  Heat distribution is critical.  Welding puts so much heat into the product at one time.  We develop a welding scheme to figure out how to make the welds without skewing the tubes or turning the part into a pretzel,’‘ notes Monty Tuttle.

‘‘You can’t just start at one end and weld like crazy or you’d never get the part out of the jig when it’s done.  Sometimes parts need to be pre-tacked in a certain way before we have the robots do the hard welding.  Then, the robot might need to skip around a bit to avoid distorting the parts,’‘ he explains.

Parts are batch run, and batch size varies widely.  ‘‘On any given day, we probably weld 25 or 30 different parts in the various robot cells.   The new welding cell makes complete parts.  Other welding cells might weld four or five different parts a day.  A robot cell might run a hundred or parts per batch, per robot,’‘ says Monty Tuttle.

‘‘All of the fabricating done for automotive suppliers is done on a Just-in-Time basis, so reliability is very important.  The Motoman robots are highly reliable, so that allows us to produce consistent, high-quality parts to meet our customer’s schedules,’‘ he adds.

Tru-Form designs and builds all of their own fixtures for the robot cells.  About half of the fixtures use manual clamping; the remainder use pneumatic clamping.  Some fixtures have proximity type part-present sensors.

‘‘Changeover between different parts is manual  and only takes an average of about five to 10 minutes to perform.  The operator unbolts the old tooling and bolts on the new tooling, then selects the proper robot program on the robot controller,’‘ says Monty Tuttle.

Tru-Form has several generations of Motoman robots and controllers, from the older K6 and K10MSB robots with ERC controllers, to the newer model H50 robots  with the latest version NX100 controller.  ‘‘All of the controllers have been user-friendly, but the new Windows-based NX100 controller is great.  It allows us to control more operations from the pendant than ever before, saving us footsteps.   Instead of walking back to the main controller, we can do it all right there from the pendant,’‘ says Monty Tuttle.

‘‘We are definitely pro robot here.  Dad put me in college for robot technology and bought the first K10MSB robot back in the early ‘90s.  I’ve had the opportunity to apply my degree with the Motoman robots through the years, and I really like it,’‘ explains Monty Tuttle.

‘‘Our people like the robots, too.  It’s given them the opportunity to learn more of a skilled trade, and earn a higher pay scale.  Getting involved with the robots really changes them.  Instead of having to come in and weld every day, they get to learn about the robots.  They can see how what they put in comes out,’‘ says Monty Tuttle.

‘‘We’ve had the best success in training our own people who already know how to weld to program the robots.  Welding is all about angles, feeds and speeds, and it is easier to learn how to weld with a robot if they already know how to do it manually.  It is a plus to be able to program the robot to do it – maybe at a faster rate,’‘ adds Monty Tuttle.

‘‘We have people on both shifts who have been to Motoman for training to learn how to program and operate the robots, as well as perform maintenance,’‘ says Monty Tuttle.

Tru-Form’s overall satisfaction with their robots is high.  ‘‘The robots meet our expectations as to what we want them to do.  We see the results on the final product in terms of on-time deliveries, quality, consistency, etc.,’‘ adds Monty Tuttle.

Our next push for robotic automation will likely be painting.  ‘‘Our products are so big, we would need to have two dual arms and the ability to reach something that can range from 6 ft wide by 10 feet tall down to something 3 ft wide and 2 ft tall.,’‘ says Monty Tuttle.  ‘‘We’re also looking to add even more flexibility in our cells by adding material handling robots to handle parts for the welding robots, and using robots that perform more than one process, like plasma cutting as well as welding,’‘ he adds.