By combining a modular design approach with motion control, food-packaging machine builders can offer flexibility in the design phase and operation phase.

Motion control has become a standard technology in packaging-machine design, giving manufacturers the ability to process many hundreds of units per minute and switch easily from recipe to recipe.  Every customer has slightly different needs, however, especially in the food industry.  Coupled with motion control, modular design platforms provide machine builders with tools that allow them to modify their designs without large investments in non-recurring engineering hours, allowing them to quickly provide flexible, economical solutions.

The food-processing industry tends to be fairly risk-averse.  Modular packaging platforms based on electromechanical shafting, however, can take the risk out of moving into new packaging designs or new capabilities.  At CP Packaging LLC, which manufactures vacuum-packaging machines for meat and cheese, modular design makes all the difference in their ability to address variable customer needs (see figure 1). "If our customer wants to add features to the machine - make a different package, make an extension for cutting, or adding labels - we can separate the machine, add the link in there, and add their component," says Dwayne Long, Engineering Manager. “We’re able to do that because of the servo drives.” With the modular platform, capabilities can be added in during build process or even during retrofit.

Daisy chaining smart drives together allows the design team to expand the base platform without increasing the size of the control enclosure. "We run a base machine that has six servo axes on it and we can run as many as 20 without our cabinet getting any larger," says Long. "We just keep adding to the end of that one cable [on the last drive]. If we add a component that requires another servo axis, it just gets basically spliced into the line; it's all done with plugs, of course, but that's how it gets in there.” The company’s form-fill-seal machines can run from 20 to 50 feet, but the design features only 6 ms of latency. To achieve the performance, the designs leverage various networking technologies, including Profibus, Ethernet, and SERCOS.

Modularity also provides benefits to customers who want to change packaging or alter a machine to package an entirely new product. In a perfect world, such a changeover would simply require a new recipe in the human-machine interface (HMI). Often, however, it requires actual physical change to the machine itself. "It might not be adding a feature, but in order to get the change in package size, you have to change the physical length of the machine to get the index to line up properly," says Long. Such modifications typically take place in the loading or labeling sections. Here, too, modular design allows the engineering team to splice in the new components to get the desired performance.

Sometimes, the changes are made to accommodate the changes to the packaging process itself. Date coding, for example, is an increasingly common requirement. Winpak Lane Inc. leverages modular design to allow customers to integrate an optional printing module as required. The company produces hard-cup machines that package everything from cream cheese to dipping sauces, and pouch machines that produce sachets of condiments (see figure 2). To simplify integration of the date-coding module, the machine panel is drilled out and set up with space for the extra drive.  Adding in the printing module is as simple as adding another servo drive to the SERCOS loop. The print head itself consists of a servo-motor-powered linear actuator that carries as many inkjet heads as required to complete the motion in the allotted time. The pouch machine, for example, converts an 18-inch-wide plastic ribbon into 12 sachets, operating at up to 115 cycles per minute.  At that speed, the film only pauses for a matter of milliseconds, so covering the entire width of the film requires three heads. The encoder feedback allows the machine to perform a straight line acceleration/deceleration, rather than dealing with a trapezoidal profile, which would slow the 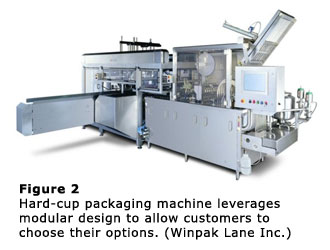 process. "Now, we can increase the line speeds that we’re capable of without encroaching on the one G acceleration limitation that the inkjets have," says Mark Griffin, Director of Sales and Marketing at Winpak.

Adding the module currently requires modest modification to the code. Eventually, the company plans to extend its modular approach to the software and HMI, so that once users add the hardware, they can just toggle the software option on and off in the HMI without any additional coding. "The HMI would hide certain functionalities that the machine did not have and then if we added them later we would just give visibility to those items and basically enable them in the program," he says.

The control architectures vary depending on the type of machine. In the case of the pouch machines, which are about the size of two refrigerators, centralized control does the job just fine. The hard-cup packaging machines, which can incorporate case packagers, are significantly longer. There was a time the case-packer module required its own programmable logic controller (PLC), in addition to the dedicated motion controller that ran the cup fill and seal operations. Today, leveraging smart components and networking, the company runs the entire machine with a single controller and HMI. They route the cabling over to a remote I/O bank on the case packer and communicate with it via Ethernet. "We've really been able to take out a lot of costs and complexity and controls by distributing some of the items throughout," says Griffin.

On a recent machine, the case packer featured three axes: two for horizontal and vertical movement of the head that picks up the cups, and a third for vertical movement of the head that places cardboard between the layers of individual cups. The team implemented the system as three independent electromechanical axes. In previous incarnations of the machine, that would have involved hardwiring pneumatic controls on the fill/seal module, as well as the case packer, increasing component count, cost, and complexity. "The case packer would have had a PLC and its own I/O, and the cup machine would have given it a ‘go’ signal to begin its packing cycle," says Griffin. "We have come a long way from that and it's proven itself in terms of output. The new machine is now up near 750 cups per minute compared to 500 cups per minute before servo technology."

Initially, customers were wary of the shift to servo motors, especially with distributed control, but they have come to appreciate the benefits, Griffin says. In a low-margin industry like food processing, even a small amount of downtime can wipe out a significant percentage of profit. Motion-control provides the flexibility and reliability that the industry needs and modular design does the rest.

With Smart MechatroniX, Bosch Rexroth offers new solutions for the Factory of the Future