Six Reasons Why Automation is Popular 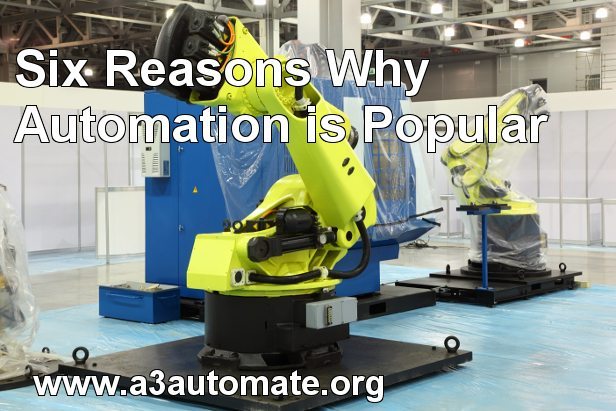 Flexible systems that are easy to use and that lead to greater profitability are making small to mid-size companies notice the benefits of automation. Key trends indicate that companies will continue automating in greater numbers and the use of equipment will become widespread. Here are six reasons behind the trend.

Management teams at one time could balk at the cost of automating and say most companies that used automation were making cars or other large machinery. Equipment is more affordable than ever and companies ranging from the construction industry to the food sector are finding it profitable. Hourly employees on a factory floor can program robots for specific tasks and the people feel empowered with control over the outcome.

Wheels and levers are innovations that developed many centuries ago and they illustrate how people have built and used simple and complex machines to be more productive. Robots are tools for greater productivity. They're a sophisticated blend of physics and software with on-going work to capture the brilliance of the human mind, sight, and dexterity.

Robots are being used in small parts assembly and with products that require a delicate touch. Since robots are more flexible than ever, a company can use the purchase to meet different needs.

The digital platform now makes it possible to work with robots from anywhere in the world. Robots can also be monitored in real time so potential issues are identified before there's disruption in manufacturing. The company, RobotStudio, follows the actions of robots on its 3D platform and can tell if preventive maintenance is needed. It can also track a robots' efficiency and make adjustments to improve performance.

Discover the Many Uses of Collaborative Robots

An In-Depth Look at Industrial Automation and Its Impact

Some robots can move around factory floors and offices and not bump into pillars or people thanks to advanced sensors. The next frontier in sensitivity is making robots able to mimic the movements and dexterity of a person's hand. This will make robotics even more useful in electronics assembly and other industries that use delicate objects. Take a closer look at the development of sensitivity within robots with this article Standardized solutions in sensitive robotic assembly.

An investment in an automated system means products can be crafted to more exact specifications than if people made the same item using traditional machines. Fewer mistakes, less waste, and reduced on-the-job injuries reduce expenses while a smart investment in automation leads to greater output and companies have seen increased sales of their products.

Recouping the cost of an automated system and realizing a profit can often be made within a year.

Robots can and do replace human jobs, no doubt about it. Many of those jobs are dangerous or performed in cold and wet places where people don't want to work. The full spectrum of automated systems is also creating jobs around the world. From 2000 to 2008, robots led to an estimated 8 million to 10 million new jobs.

Another one million high quality jobs will be created in a five-year period, according to the International Federation of Robotics. Many of the jobs will be in the food sector, electronics, alternative energy and advanced battery manufacturing. Automated jobs include designing and installing systems, marketing and selling robotics equipment, and maintaining equipment that didn't previously exist.

Automation is also proven to make small-to-medium sized companies in the United States better able to compete on a global level.