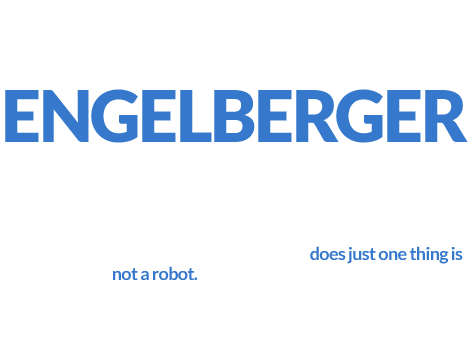 Memorial donations can be made to:

Joseph F. Engelberger, an engineer and entrepreneur who pioneered the robotics field, died December 1, 2015, in Newtown, Connecticut at age 90. Engelberger was founder and president of Unimation, Inc., the world’s first industrial robotics manufacturer, which he launched in 1956 and grew into a company with more than 1,000 employees before the enterprise was acquired by Westinghouse. Engelberger was also the founder of HelpMate Robotics, Inc., which was later acquired by Cardinal Health.

Widely known as the father of the modern robotics industry, Engelberger worked closely with inventor George Devol, licensing patents and developing the first industrial robot in the United States under the brand name “Unimate.” The technology was originally adopted for industrial use in a General Motors plant in 1961 and was later deployed at factories worldwide, where it transformed modern manufacturing processes.

“Joe Engelberger made some of the most important contributions to technological advancement in the history of the world,” said Jeff Burnstein, President of the Robotic Industries Association (RIA), an organization Engelberger was instrumental in founding. “Because of Joe, robotics became a global industry that has revolutionized the way things are made. He was years ahead of his time in his vision of how robots could be designed and used both inside and outside the factory. Joe envisioned robots based on insects and birds decades ago -- developments that we are finally seeing today. Early on, he asked the one question that continues to transform the industry: ‘Do you think a robot could do that?’ Inspired by Joe’s insights, researchers have answered ‘yes’ and developed the amazing robotics applications found worldwide today.”

Engelberger’s industrial applications fundamentally changed the automotive manufacturing sector, introducing robotics that enabled carmakers to achieve greater efficiency and precision with the use of robotic arms on assembly lines. The innovations Engelberger introduced were a major factor in the rise of the Japanese auto industry, where the use of robotics was enthusiastically embraced in the post-war era.

Inspired by science fiction writers such as Isaac Asimov to envision a world in which humans were assisted by robots in all aspects of life, Engelberger was a tireless advocate for robotics. In addition to his groundbreaking work, he testified before congressional committees, authored books, published articles, and gave media interviews to advance the cause of scientific research and encourage application of robotics in industry, space exploration, and daily life.

Engelberger and his Unimate robot appeared on “The Tonight Show” with host Johnny Carson in 1966, where the robot demonstrated its dexterity by sinking a golf putt, pouring a beer, and directing the band. Engelberger’s books, Robotics in Practice and Robotics in Service, are considered seminal texts on robotics and have been translated into multiple languages and distributed worldwide.

Engelberger was inducted into the U.S. Manufacturers Hall of Fame in 2009. The Robotics Industries Association named its prestigious annual award the Joseph F. Engelberger Award in recognition of his outstanding contributions to the field of robotics. Other honors Engelberger received over the course of his career include induction into the National Academy of Engineering and the Connecticut Academy of Science and Engineering.

Engelberger was profiled in the London Sunday Times as one of the “1000 Makers of the Twentieth Century” and received honorary doctorates from the University of Bridgeport, Briarwood College, Spring Garden College, Trinity College, and Carnegie Mellon University. He won numerous major awards honoring his pioneering efforts in the field of robotics, including the Society of Manufacturing Engineers’ Progress Award, the Nyselius Award from the American Die Casting Institute, the Leonardo da Vinci Award from the American Society of Mechanical Engineers, the American Machinist Award, the Golden Omega Award at the Electrical Electronics Insulation Conference, the McKechnie Award from the University of Liverpool, the Egleston Medal from Columbia University, the Beckman Award at the LabAutomation Conference, and the Japan Prize.

Engelberger earned a bachelor’s degree in physics and a master’s degree in electrical engineering from Columbia University. Early in his career, he served as engineer and chief engineer at Manning, Maxwell and Moore. He later founded and served as president of both Consolidated Controls Corporation and Unimation, Inc. He also served as vice president at Condec Corporation.

Originally focused primarily on industrial applications in robotics, Engelberger later explored the application of robotics in human services, founding HelpMate Robotics, Inc., and serving as the company’s chairman. There, he was instrumental in developing a robot hospital courier, HelpMate, which is currently used in hospitals worldwide. Engelberger also spearheaded development of robotic applications to assist in care for elderly and disabled individuals.

“Joe led the formation of the first and only robotics trade association in North America at a small meeting in Chicago, where he brought early robot developers together,” said Don Vincent, past RIA President. “Joe’s personal drive and commitment made RIA a reality and his pioneering talents convinced his competitors that RIA was needed for the future of manufacturing. Joe was our Henry Ford for the robotics business and a tremendous international ambassador.”

Responsible for the birth of the robotics industry, Engelberger was an American physicist, engineer, and business man whose innovative contributions revolutionized manufacturing and society.

Joseph F. Engelberger ushered in a whole new technological era. See the important events that influenced and occurred in his life that paved the way for new technologies to be developed.

Revolutionizing manufacturing the world over, the Unimate was the very first industrial robot. It has left a living legacy in an industry to which it gave birth.