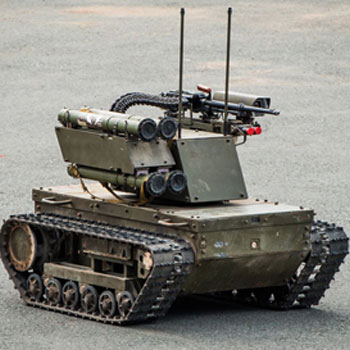 Defense robots are professional service robots that are deployed by the military in combat scenarios. They’re often intended to enhance a soldier’s existing capabilities while keeping them out of harm’s way as much as possible. Defense robots contribute to military superiority by giving troops an advantage at the ground level. Militaries as a whole gain a tactical advantage through the use of defense robots.

Defense robots will see a moderate gain in 2018, growing by 4% to about 12,500 installed units, according to the International Federation of Robotics World Robotics 2018 Service Robots report. In 2017, defense robots accounted for approximately 11% of all service robots, at a value of $902 million, and will continue to become a well-established technology as more and more units are sold.

Defense Robots Estimated Growth at 4% in 2018

Defense robots come in many shapes and sizes, but most serve the same basic functions of protecting and enabling soldiers in combat. The military has a long history with robotic exoskeletons for defense applications, which were built to enhance soldiers’ endurance and agility. At various times, these have come in the form of:

Field robots, another form of professional service robot, are also becoming common in defense applications. These defense robots perform a variety of functions, including:

Some field robots in defense applications are beginning to be equipped with weapons for offensive capabilities.

Defense robots are an increasingly common part of military campaigns, helping to keep soldiers safe and providing a tactical advantage in nearly any combat scenario. As the military continues to experiment and find success with different forms of defense robots, the market is expected to experience strong growth.