The study of marine life presents many unique challenges for biologists and researchers wanting to learn more about all the creatures found under the sea. 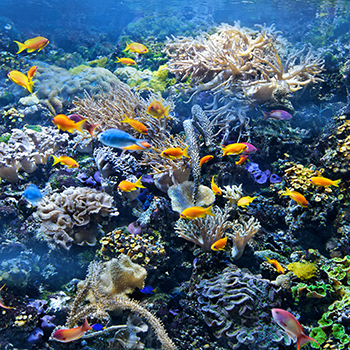 Today, many marine biologists focus on studying coral reefs and their role in ocean environments. Coral reefs are sometimes referred to as “the rainforests of the sea” because of their diverse and productive population of plants and animals. In fact, coral reefs support 25% of all marine life, even though they only cover 1% of the ocean floor.

Coral reefs provide a habitat for plants and animals, a breakwater for cities on land, and food, sources of medicine, and income for humans. Increasing ocean temperatures is resulting in coral bleaching, an event in which corals expel their life-producing algae. This jeopardizes the health of the coral reef and the plants and animals that rely on the reef. Because coral reefs contribute so much to marine ecosystems, studying how and why these reefs are bleaching is a vital part of protecting and preserving these habitats.

Marine biologists have been struggling to find a technology that accurately images coral tissue. Coral tissue is a complex structure, and many imaging technologies can potentially damage living coral. Once marine biologists understand coral tissue, they will be better equipped to reverse coral bleaching.

ISOCT uses lasers to scan the living coral and record its optical properties in 3D resolution. The tomographic technology provides greater clarity into the statistical mass distribution of coral species and quantifies the chemical concentration within the coral.

A team at the Scripps Institution of Oceanography is using 3D imaging technology along with VisCore, a custom visualization software to explore reefs in a laboratory in real-time. Together, the technologies allow researchers to study and explore a 3D map of the reef in virtual reality. This helps the research team to understand the coral reefs better, whether or not the research team is in the water.

Marine biologists are using 3D imaging technologies to map and monitor a coral reef in Scotland. The reef was declared a Marine Protected Area 16 years ago due to damage. The team uses BioCam, a combined 3D stereo camera and laser scanner, that creates massive visual reconstructions of the seabed. With this specialized technology, they can get more accurate, more detailed images of the reef and get a much broader sense of the reef’s health.

Machine vision is helping marine biologists better understand and monitor the coral reefs that are invaluable for thousands of plants and animals. 3D imaging systems allow marine biologists to investigate large areas of the seabed at millimeter-scale resolution without damaging living coral. These advanced imaging systems will likely play an essential role in monitoring and conservation efforts in the future study of coral reefs.