As supplier of linear and torque motors we provide specialized motor technology and integration in customers motion solutions. Tecnotion direct drive motors are seamless integrated in a wide range of applications. We direct drive your motion technology!

In order to create the desired movement a controller must determine which phase needs to be switched on. The most popular method to determine where the forcer is located within the magnetic field is with a Hall effect sensor.

To understand the process of commutation a circle-graph can help explain. The current which flows through a coil unit has the shape of a sinus. The Y-component of an arrow in the below circle-graph determines the magnitude of that current. As the arrow makes a full rotation the magnitude follows a sinus pattern. The currents are 120?degrees out of phase, demonstrated by the three arrows being equally spaced over 360 degrees. 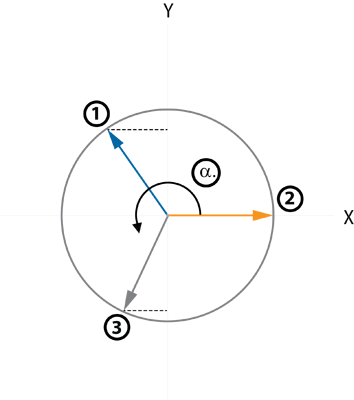 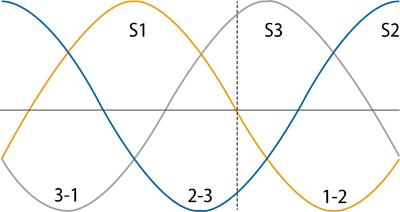 There are a couple of ways to determine the position of (electromagnetic) coils over the magnet-track (or rotor). If the detail and precision of an encoder (ruler) are not needed, an analog hall-sensor can be used to measure the position of the coil unit. Digital hall-sensors are used to commutate the current. 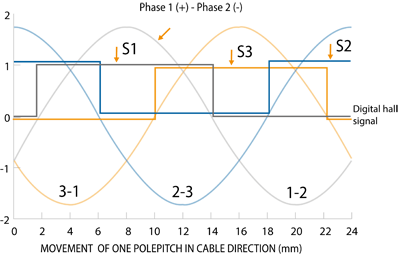 The process of commutation in a synchronous motor is that of switching between the phases. It is possible to switch between the phases in such a way that the winding will alternately attract and repel the permanent magnets to create the desired motion through Lorentz Law. Tecnotion Iron Core, Ironless and Torque motors are all 3-phase synchronized motors.

By alternating the current, the direction of the magnet field in the coils is reversed. The interaction of this magnetic field with the permanent magnet track (or rotor) creates motion.

COMMUTATING THE PHASE OF THE CURRENT

To summarize what is needed to effectively move  a linear or torque motor: commutation of the current phases and optionally a Hall effect sensor. The 3 phases of current need to be controlled continuously in order to generate motion. Hall sensors can be used to determine the position of the forcer within the magnetic field for a controller to correctly commutate the phases. Digital hall-sensors use 3 signals, also spaced at 120 degrees over their specific magnet pitch. Tecnotion digital hall sensors require a supply voltage between 4,5 V and 28 V dc. The analog hall requires a 5V power supply.

Ask A Founder - Why Should Anyone Care About Electric Motors?