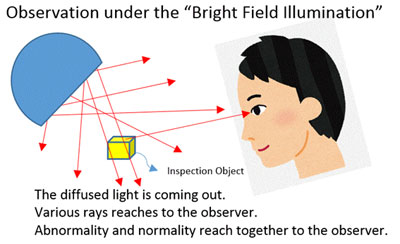 The visual field and the object to be inspected are brightened as much as possible, and if there is abnormality, abnormal reflected light is diverted, so that it is the theory that abnormality appears darker than the surroundings.

On the other hand, in the case of dark field (and collimation), the abnormality becomes brighter than the surroundings.

Keep the field of view dark (do not peep at the lighting), hold the inspection object over the ray. At this time, the collimated light beam goes straight and reflects when it hit abnormally. Since this abnormally reflected light reaches the eyes, it becomes the logic that abnormality appears bright in a dark view. 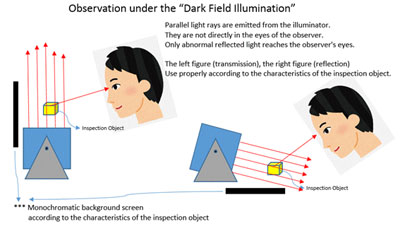 In bright field, due to the way of observation, light rays other than abnormal reflected light also reach the eye, so it was difficult to inspect.

In that respect, if it is a dark field collimation, abnormal reflected light (only) will be visible so that the inspection is easy.

Rather than catching some abnormal reflected light in the brightly condensed state, it is easy to stay in the eye if the anomaly shines gleefully in the dark.

For example, even when a specimen having such a property as to reflect light rays around such as a prism or a beam splitter, if dark field collimated illumination is applied, light rays (abnormal reflected light) to be seen reaches the eye except for extra rays , Inspection becomes easy.

In other words, it is widely available for visual inspection.

Besides, since it can irradiate green light besides white, it is useful as examination.

Motion Solutions to Maximize Performance in Metrology and Inspection Systems

How to Assess Small-Part Inspection Applications for Automation