Understanding the Distinctions Among Torque Ripple, Cogging Torque, and Detent 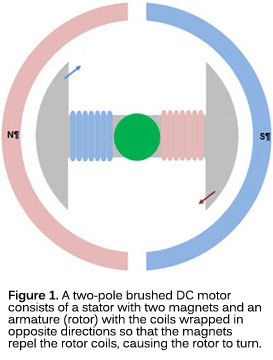 In a perfect world, positioning axes would deliver the load to the desired location both rapidly and accurately. Unfortunately, reality is not so kind. Motors create torque as a result of the interaction of magnetic fields. Those fields are anisotropic, which means that the torque they generate varies. Whether or not this creates a problem depends upon the application. In this article, we will discuss the three terms surrounding torque variation, clarifying the mechanisms involved and what they mean to your design.

Torque ripple
Although the specifics of motors vary widely, the basic components are a rotor and a stator (see Tutorial: Brushed DC Motors). Most commonly, the rotor is attached to the load and spins as a result of repulsion between the magnetic field of the rotor and the magnetic field of the stator (see figure 1). In order to keep the motor turning, the magnetic orientation for the rotor must switch directions periodically. The frequency with which this occurs depends on the number of magnetic poles in the rotor/stator, which can vary from two to N.

The interaction between magnetic fields follows a sinusoidal curve, which means that it varies nonlinearly as a function of rotor angle. The end result is a ripple in peak torque as a function of time (see figure 2). Increasing the number of poles can reduce the level of torque ripple, but it will always be present to some degree. 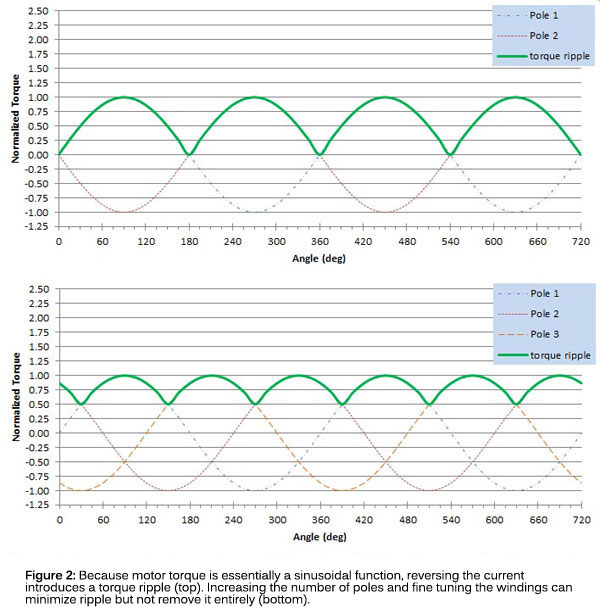 Adding more polls increases costs and complexity but for applications such as machining that require very smooth motion, it may be the best solution.

Cogging and detent
Cogging and detent torque are open circuit torque, whereas torque ripple occurs only when the motor is energized. Cogging is a characteristic of permanent-magnet brushed, brushless, or AC synchronous motors. Cogging torque is generated when the sides of the rotor teeth line up with the sides of the stator teeth and the motor requires torque to break that attraction.

There appears to be general agreement that cogging torque and detent torque refer to the same phenomenon. Whether the two mean the same thing, well, that's a matter for discussion. “I'm of the opinion that they are the same,” says Joseph Profeta, director of product management at Aerotech Inc. “If you look at cogging torque, it's basically as a result of the anomalies in the magnetic field which are usually caused by a specific orientation of the magnets.”

“There is no good base of definitions for these two terms and they get mixed up in a number of areas within the motion control market.” says Dan Jones, president of Incremotion Inc. (Thousand Oaks, California). “Most servomotor guys do not design step motors and vice versa so you're really looking at two different classes of motor guys out there and they don't mix that well. Cogging has become more important because there's a lot more work being done in brushless motors so you'll hear cogging more today than you will detent.”

What’s important about the two terms is not that they describe different physical mechanisms—they don’t—but that the effect and value of those mechanisms differs depending on the context. In the case of a stepper motor, detent might actually improve positioning performance by introducing step-by-step operation. In the early days of stepper motors, prior to the development of micro-stepping motors, engineers referred to detent as holding torque, which helped systems maintain position even in the absence of power.

In the case of a servo motor, cogging torque affects the performance of the motor when it begins or ends a move. Depending upon the motion requirements, cogging can prevent a servomotor from positioning to the level of accuracy required, but for the most part it’s not a problem. “There's a perception that if a permanent-magnet motor has a lot of cogging torque it's not a good motor but that's not true,” says motor designer and IEEE fellow Jim Hendershot, co-author of Permanent Magnet Brushless Motors and Generator Design. “Once you power the motor, that cogging torque disappears.” For point-to-point moves such as automated testing, for example, cogging doesn’t tend to present an issue. Measurements take place while the system is stopped, while cogging occurs at the start and end of a move.

Combatting cogging
Motor designers have a number of tools they can use to combat cogging. One common approach is to skew the rotors so that instead of the teeth crossing the stator pole in a straight line, they cross at a slant, making the effect more gradual.

Common wisdom holds that skewing adds cost but it doesn’t necessarily have to. In some cases, manufacturers stack the laminations, insert slot liners, and insert the coils. Only then do they skew the stack, after which they weld the part along the outer diameter to lock it in place. The process is essentially identical to conventional fabrication with the exception that the welding operation takes place after the coils are in place rather than before.

Another way to mitigate the effect of cogging is to select a fractional slot combination in which the number of stator slots divided by the number of rotor poles is a non integer number. As a result, only one side of the stator magnet lines up with the rotor slots. The edges of the slots to not line up with the poles, which, reduces cogging torque.

Flux focusing can also be effective, says Profeta. “Flux focusing magnets tend to be smaller magnets in different strengths so when you look at the magnetic field as it interacts with the coil it's very uniform and you don’t end up with any ‘cogs’ when you use that motor,” he observes.

Another way to avoid cogging is to go with a coreless design. The rotors of coreless motors consist of skew-wound wire with no core. They offer lower inertia and inductance, as well as zero cogging. Of course, as with all things in engineering, there are trade-offs. Cogless designs may offer smoother torque but that comes at the price of lower torque all the way around. For constant-speed and contouring applications, a coreless motor may provide the best results.

For an application moving at constant speed, the frequency of the cogging depends on the speed. By choosing the proper drive and designing the control loop to minimize the amount of gain at that frequency, system designers can minimize the effect of cogging.

Finally, engineers can develop a motor that includes cogging but compensate for the performance via controls algorithms. “If you're doing medium precision work, that can be very good,” says Profeta.

Making tradeoffs
Ultimately, it’s a matter of tradeoffs. For many applications, cogging torque has little effect. In the case of a continuous-motion application like scanning or contouring, however, cogging can be a problem. “Manufacturing or inspection, those tend to be some sort of contour moves where you need smooth motion,” says Profeta. “Cogging can affect you, even if you’re doing a positioning application. You have to ask yourself what type of positioning application you’re doing and does this make sense or no.”

Other applications that need cogging free performance include those that require immediate accuracy, for example positioning a telescope to capture a specific event. The system needs to move accurately to track the object in question, and it needs to do it right the first time. Even a small error introduced by cogging could make the difference between capturing an event and missing it. In contrast, a pump used to fill ampoules with a set amount of drug can probably work just fine using a stepper motor. Pulsing the pump with small micro step pulses will deliver the necessary amount within allowable error.

Ultimately, it comes back to the application,” says Jones. “What is the system trying to accomplish, what’s the required accuracy and repeatability, and speed?” Make your design choices with those factors in mind, and your system will succeed.

Motion Control Trends to Watch in 2021