At LMI Technologies we work to advance quality and productivity with 3D sensor technology. Our award-winning, FactorySmart® solutions improve the quality and efficiency of factory production by providing fast, accurate, reliable inspection solutions that leverage smart 3D technologies. Unlike contact based measurement or 2D vision, our products remove complexity and dramatically reduce implementation cost while achieving repeatable, highly accurate measurement. To learn more about how LMI's inspection solutions can benefit your business, we invite you to contact us.

Structured Light vs. Laser Triangulation for 3D Scanning and Inspection

When planning the implementation of a 3D inspection system, one of the first questions that has to be answered is which type of 3D sensing technology to use: structured light or laser triangulation (a.k.a. laser line profiling).

Ultimately, the decision should be made based on key factors related to the individual application in question.

Object Motion Considerations
Structured light is the optimal solution when the object is stationary at the point of inspection. 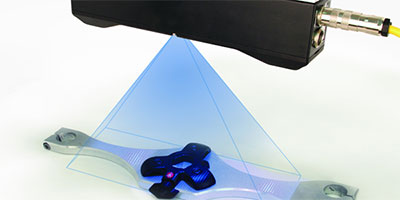 Structured light scanners take a sequence of images with different patterns of light projected onto the object surface in order to create a full 3D point cloud of the stationary object geometry. If the object moves significantly during the data acquisition process, errors in results can occur.

Laser line triangulation is the optimal solution when the target object is in motion, as on a conveyor or transfer line.

Laser line triangulation scanners collect a series of profiles from the laser line as the object moves past the sensor’s field-of-view. 3D smart sensors with built-in software can then be used to automatically assemble the multiple profiles into a complete 3D map of the object surface. If the object transfer speed is precisely uniform, a time-based sampling can be used. When the object transfer speed is not uniform you can eliminate errors from varying object motion speed by using an encoder to monitor part motion.

To simplify system integration, 3D smart sensors offer a direct encoder input and built-in software that can be configured with just a few clicks from your browser –– allowing you to select the desired profile sample spacing.

Ambient Light Considerations
Ambient light in the manufacturing environment (e.g., near windows) can vary significantly and is not subject to control. This can dramatically affect the performance of improperly designed or implemented 3D sensors and provide erroneous measurements or potentially no data at all.

How a sensor performs in ambient light conditions is especially important in applications subject to direct sunlight, such as profiling roads or digitizing 3D dimensions of logs and lumber in open mills.

In ambient light applications, high power laser triangulation sensors are the optimal solution. Lasers by definition project a very specific and narrow wavelength, which means they can use a narrow bandwidth optical filer positioned in front of the imager to effectively eliminate ambient light. 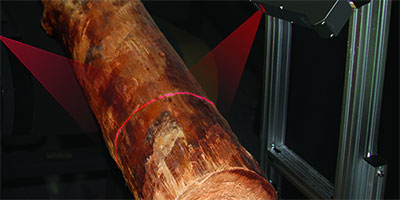 Sensor Set Up Considerations
Configuring a structured light sensor for a specific application is in some respects a simple process. The target object is stationary while parameters such as exposure, filtering and analysis settings are optimized, with a full 3D point cloud acquired in a single snapshot.

Conversely, since laser triangulation sensors require part movement, objects must be returned for each measurement sequence.