April 14 th, 1995 is the day on which our “ONLINE SOLUTIONS “ came into existence to serve the customers with “ SOLUTIONS” in the field of PC based Imaging, Video, Multimedia and graphics.Since its inception, Online Solutions has been providing right and effective solutions to its customer base. Online Solutions has been taken over by Online Solutions (Imaging) Pvt. Ltd., in the year 1999. By expanding its product profile every year, the company is trying to keep pace with most of the customer requirements. Effective pre and post sale support stands as the base for the growth of the company.The product profile includes Frame grabbers, real time processing systems, CCD Cameras, Customized Industrial PCs, DSP based imaging systems, machine vision software, imaging software, vision tutors, compression hardware, editing software, scan converters, DVR Systems, hi-speed imaging, IR Cameras, XRAY Cameras, Sensors etc.

First of its kind from Teledyne DALSA

There are three fundamental proper-ties of light: intensity, wavelength and po­larization. Almost all cameras today are designed for monochrome or color imag­ing. A monochrome camera is used to mea­sure the intensity of light over a broadband spectrum at pixel level1, while a color or multispectral camera is used to detect the intensities of light at the red, green, blue and near-IR wavelength bands2,3. Similarly, a polarization line scan camera captures the inten­sity of light at multiple polarization states.

Polarization offers numerous benefits, not only detecting geometry and surface, but measuring physical properties that are not detectable using conventional imag­ing. In machine vision, it can be used to enhance contrast for objects that are dif­ficult to distinguish otherwise. When com­bined with phase detection, polarization imaging is much more sensitive than con­ventional imaging.

Line scan polarization cameras using micropolarizer filters overcome the short­comings of other tehniques like division of time and division of amplitude. In line scan, multiple arrays with different polarization filter orientations capture images simulta­neously but at slightly different positions. Spatial correction allows the camera to align all channels at the same object point. The advantage of line scan over area scan is that it provides multiple native polariza­tion state data without any digital manipu­lation

Teledyne Dalsa’s Piranha polarization camera incorporates a CMOS sensor with a quadlinear architecture. A mi­cropolarizer array consisting of nanowires is placed on top of the silicon; the nanow­ires have a pitch of 140 nm and a width of 70 nm, while the orientation of the micropolarizer filters is 0°, 135° and 90°, respectively, on the first three linear ar­rays. The intensity of the filtered light is recorded by the underlying arrays. Thefourth channel is an unfiltered array, which captures the total intensity, equiva­lent to a conventional image, while the gaps in between the active arrays reduce spatial crosstalk.

Polarization images are largely uncorre­lated to conventional images based on in­Linetensity. In a vision system, data processing could be implemented in each specific po­larization state or their combinations. It’s useful to have a representation of polariza­tion images considering human’s inability to see it. Color-coded polarization images are probably the most popular as they not only give visual perception but also utilize the standard data structure and transfer protocols in color imaging.

Today, the machine vision industry is facing many challenges in detectability as speed reaches to about a 100-kHz line rate and object resolution shrinks to sub­micron. Different technologies have been developed, such as time delay integration to improve signal-to-noise ratio, and color and multispectral imaging to obtain spec-tral characteristics. However, higher con-trast is required based on the physical properties of materials. Polarization plays a key role here as it is very sensitive to any change on the surface or interface. Because of phase detection, polarization-based imaging is much more sensitive than intensity-based imaging. 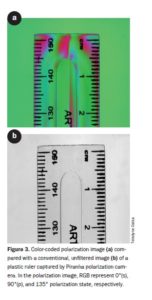 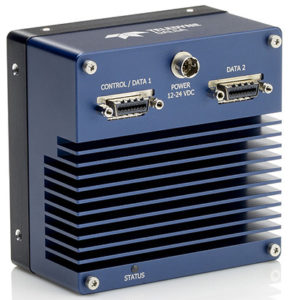 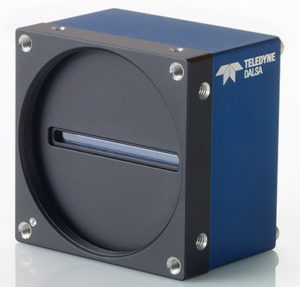 Teledyne DALSA has introduced Piranha4 Polarization™ camera which is a breakthrough in the machine vision industry. This high-speed polarization camera features three native polarization states plus an unfiltered channel.

Inspection of Individual Connectors in a Large Backplane Array

Vision Growth Leads to Talent Shortages, but Where’s the Recognition?