Aerotech’s PSO controller feature has long been used by industrial and research users alike to command their process tool – a laser, sensor, camera, or other device – at very high repetition rates and with extremely low latencies. The seamless integration of process and motion control is one of the factors that make Aerotech’s controllers highly desirable.

PSO normally requires direct access to up to three axes of encoder feedback in order to calculate the vector distance traveled. Requiring access to real position has its benefits, but has been a limiting factor in the adoption of PSO for some applications. Due to the sum of the squares equation used to calculate the spacing of PSO firing events, traditional X/Y/Z Cartesian systems were required to use PSO.

Part-Speed PSO enables the user to access PSO capabilities even when encoder feedback is nonlinear or not accessible. With Aerotech’s A3200 controller and Part-Speed PSO, control of the PSO output can be based on the velocity command of your process tool with respect to the part being processed. This capability enables PSO to be used in several new situations, such as:

2. The type of encoder feedback required for the PSO hardware circuit is not accessible. This can occur because: 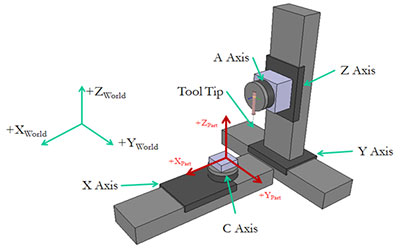 Figure 1. A five-axis machine configuration is shown. In this configuration, the user programs in X/Y/Z “part” space and motion is commanded to the X, Y, Z, A and B “real” axes. The A and B axes are typically used to maintain normalcy between the process tool and the surface of the part being processed.

Also note that x may not be the only real axis being commanded. However, it is the axis that contains the physical PSO output and hardware.

Part-Speed PSO is configured by extending the use of pre-existing A3200 commands:

The PULSE SET OUTPUT command is used to establish which axes will be used to generate the tracked velocity command, which is calculated using the square root of the sum of squares of the components of each axis specified. In the example program, virtual axes X and Y are tracked. The PULSE SET OUTPUT command is also used to determine which real drive will receive the velocity command. In this example, it is the “real” x axis.

For that reason, the “real” x axis is the axis that receives all of the PSO commands, including the PSOTRACK INPUT command. 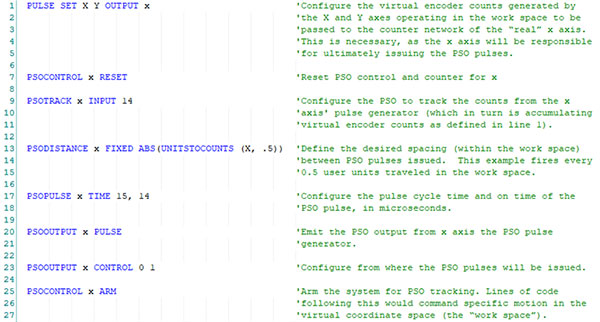 In another recent Aerotech white paper, Customized Relationships and Coordinated Motion with AXISSTATUSFAST, it was discussed how the A3200 controller allows for advanced kinematic relationships to be quickly implemented. Although not thoroughly discussed in this particular white paper, pairing together a kinematic program (often running on a separate controller programming “task”) with Part-Speed PSO demonstrates the most advanced implementation of this new controller feature. As you program to virtual axes and use the commanded vector velocity of virtual axes as the input to the PSOTRACK INPUT command, the separate kinematic program commands the real axes to effectively move your work point as you have commanded the virtual axes.

The following should be considered when implementing Part-Speed PSO.

1. The PULSE command pulse generator output is limited to a 24 MHz output rate. The CountsPerUnit parameter and programmed velocity (feed rate) of the virtual axes will determine the PULSE command pulse generator output rate. The maximum allowable programmed velocity, referred to as “FeedRate”, may be determined from the equation:

2. The CountsPerUnit parameter should be chosen such that the resolution of the virtual axes in the work space is smaller than the PSODISTANCE specified within the program configuration (reference line 13 in the example code).

3. The PSO outputs on Aerotech drives have an output frequency limit for PSO output pulses. Refer to Help topic “PSO Specifications” for values of specific drive types. Using the referenced frequency limit, the minimum spacing between pulses can be determined from the equation:

where LaserOutputFreq is the value determined from the referenced Help topic.

CUI in the Lab - Capacitive vs Optical Encoder Oil Test

Why You Need to Adopt PLC Software