Performance Motion Devices’ technology controls more than six million motors worldwide. We provide reliable multi-axis motion solutions and unparalleled technical support such as; motor set-up and tuning, motion board design, electrical schematic review and custom software/hardware development services. Performance Motion Devices offer a full line of intelligent ICs, modules, digital drives, and boards, plus easy-to-use software which will bring your system to life quickly. Our intuitive development tools and common motion architecture make design, development, and validation of your motion system fast, predictable and low-risk. Performance Motion Devices’ ensemble of industry-leading customers provide us with extensive experience across a wide range of applications. Need for the best way to control motion for a multi-axis application? Let us show you how we can help.

When it comes to step motors, a new drive technique called stepper servo is making everything old new again and winning back machine designers who may have relegated step motors to the category of low cost but low performance.

What makes this technique powerful is that it can use a generic non-custom step motor yet extract much more performance out of it. This is accomplished by adding an encoder and operating the motor as, effectively, a commutated two-phase Brushless DC motor.

The fact that an encoder is needed means that truly low cost applications will not be good candidates for stepper servo. But for applications that would otherwise have a Brushless DC motor, stepper servo is increasingly being considered as an alternate approach.

In addition to offering a lower cost solution than a comparable Brushless DC motor, stepper servo can actually outperform brushless motors in areas such as acceleration rate and torque output. This makes it a candidate for applications such as high speed point-to-point moves, textile equipment, coil winding, high-speed electronic cams, and more.

So how does stepper servo work? To answer this we will start with a quick review of traditional step motor control schemes and then dive into how stepper servos are different, and what they can do for today's machine designer.

You Had Me At Full Step

Step motors are popular first and foremost because they are easy to use. They do not require an encoder to maintain their position, and unlike DC Brush or Brushless DC motors when used for positioning, they do not require a servo control loop. Their advantages are low cost, high torque output, and brushless operation. Their main drawbacks are vibration, noise, and a limited speed range. 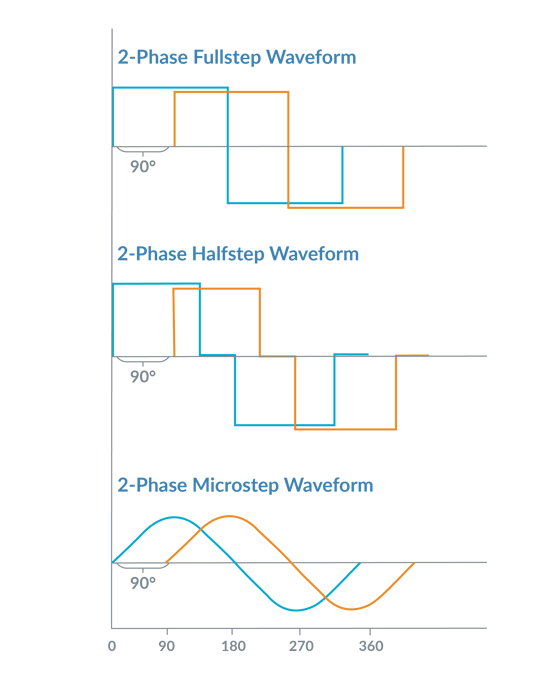 In the world of step motors, the phasing techniques that the amplifiers employ are given special names such as full step, half step, and microstep control. These different techniques refer to the number of power levels that are applied to each motor coil during an electrical cycle. Whichever drive method is used, the motor moves forward or backward when the external controller alters the electrical phasing.

In The Valley Of The B-Field

Now lets look at what's happening inside the motor, and understand in more detail how a traditional step motor is operated.

Figure 2 provides a simple magnetic model of a step motor. The rotor can be thought of as a spinning bar magnet that interacts with an externally controlled magnetic field (the stator). The rotational torque generated is zero when the N-S rotor field aligns with the stator N-S magnetic field (also called a B-Field), and maximum when the two fields are at an angle of 90 electrical degrees from each other. Its worth noting that the actual internal construction of a step motor looks nothing like this, but it's still a useful way to understand the motor operation.

When the stator coils are driven with current, a sinusoidal force 'valley' is created which drives the step motor to settle at a specific position. The more current that is driven through the coils, the greater the depth of the force valley. In this force profile of hills and valleys, wherever the curve is horizontal there is no mechanical torque generated, and wherever the curve is the steepest the generated torque is the largest.

As the Figure above shows, in a traditional step motor drive scheme the motor settles to the 'bottom' of the force profile. At this point the net rotational motor torque generated is zero because the motor is at an equilibrium point. This explains why position can be maintained in a step motor without an encoder or servo loop.

As convenient and simple as this scheme is, it has a number of drawbacks. Here is a quick rundown:

You Had Me At Stepper Servo

Now let's delve into the stepper servo technique, sometimes also called closed loop stepper operation (a term that is a bit ambiguous because it is also used to describe a traditional step motor control scheme that uses an encoder to verify the final position thereby 'closing' the loop).