Performance Motion Devices’ technology controls more than six million motors worldwide. We provide reliable multi-axis motion solutions and unparalleled technical support such as; motor set-up and tuning, motion board design, electrical schematic review and custom software/hardware development services. Performance Motion Devices offer a full line of intelligent ICs, modules, digital drives, and boards, plus easy-to-use software which will bring your system to life quickly. Our intuitive development tools and common motion architecture make design, development, and validation of your motion system fast, predictable and low-risk. Performance Motion Devices’ ensemble of industry-leading customers provide us with extensive experience across a wide range of applications. Need for the best way to control motion for a multi-axis application? Let us show you how we can help.

In this entry to PMD's solving motion control problems series we will focus on mobile and battery operated applications where three particular requirements become especially important: the weight, the efficiency, and the amount of heat generated by the motor and associated controls.

Mobile robotics covers a broad range of applications, including warehouse robotics, drones, battlefield robots, underwater robots, and more or less any automated mechanism that has to transport itself in its operating environment.

The close cousin of mobile robotics is portable equipment carried or carted by the user. This is typically either medical equipment, such as fluid pumps, drug infusers, and muscle assist devices, or hand held manufacturing and assembly equipment such as drills, torque wrenches, and test probes.

What all of these applications have in common is that they are battery operated. Battery operation drives the need for efficiency, but also the need for less weight since heavier mechanisms will require more energy to move. Lower operating temperature may or may not be important in mobile robots but is often very important in portable equipment applications. This is because excessive heat in the hand held or patient-worn device can cause discomfort or even injury.

So for this entry of our Common Motion Control Problems series, let's go on a diet, get lean and mean, and stay cool as we show you how to improve the performance of your mobile motion controls. We will see that in addition to advances in the motors themselves, there have been a veritable gymnasium of advances in motor controls that are driving an explosion of new applications in mobile motion control and robotics.

Every motion control system has two major elements that affect its weight: the motor and the controls that drive that motor. By motor here we mean the entire actuator, so this includes gearheads or other reducers that are part of the actuator assembly, and the weight of any attached encoders or sensors. By controls we mean the electronic system that accepts a DC voltage from the battery, receives or internally executes motion move commands, and ultimately drives the motor coils.

First, we will focus on the motor. Figure 1 shows two graphs comparing various motor types in two key performance metrics: power output to weight, and torque output to weight. For a given application usually one of these two factors are more important than the other, and in fact, they are related because power is defined as torque times spin rate.

As the graph shows, Brushless DC motors, with their ability to generate a constant torque up to a high spin rate, typically provide the highest figures of merit for power output to weight. Typical values are double the ratio of DC Brush motors. AC Induction motors, sometimes used in high power applications such as electric vehicles, are only rarely used in mobile robotics so those are not included in these graphs. Step motors, although frequently used in mobile and portable applications, are not usually part of the power to weight conversation because their torque drops off rapidly as rotation speed increases.

If we instead want to optimize torque to weight though, step motors are back on the table. Traditionally open-loop operated step motors have high holding torques, but their ability to deliver that torque over a working speed range is affected by their tendency to oscillate. Practically speaking this means the effective torque delivered by the step motor is between 50% and 70% of the motor's rated holding torque.

There is an alternate way of operating a step motor however which largely solves this issue. A technique called closed loop servo, also called stepper servo, uses an encoder to operate the step motor as if it were a two-phase Brushless DC motor. The result is significantly higher torque over the operating range of the motor because mid-range instability, a torque killer for open loop step motors, is eliminated.

This is for two reasons. The first is the inherent geometry of small motors, which affects how they generate and corral magnetic forces. Motor efficiency sapping effects, such as stray magnetic fields and eddy current generation, are proportionally greater for small motors than for large motors. But another important reason is that motor manufacturers just have not yet been motivated to dramatically increase power and torque to weight ratios for smaller motors.

The electric vehicle market is driving a lot of research activity in this area because it is such a large and economically valuable market to motor manufacturers. Mobile/portable motion control markets, while also growing, are still much smaller. Nevertheless at least some of the design changes that are powering the electric car and even electric airplane markets can be expected to trickle down to the smaller motor market in the next few years.

It is worth delving further into a new type of control technique for step motors known as closed loop stepper, also called stepper servo. What makes closed loop stepper powerful is that it can use a standard step motor yet extract more effective torque out of it, particularly over the full range of operating speeds. 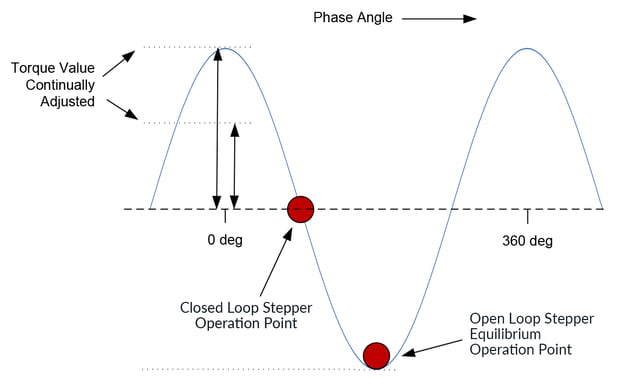 The second difference is that closed loop stepper operates the motor like a Brushless DC motor and commutates the phase angle using the actual encoder position. Figure 2 shows the closed loop commutated operation point relative to the traditional open loop operation point. In this figure the steeper the curve, the greater the rotor torque generated.

Why Soft Motion Is the Best Motion Controller on the Market