How to Remove the Return Motion in Robotic Path Planning

A novel closed loop track based multi-head robot has been developed to increase material handing throughput. This robot allows for waves of autonomous robot heads to move materials in the working path by eliminating the traditional return path. This is advantageous for the singulation of product from bulk, for high volume material handling from large conveyors, and other applications.

Introduction
The world of industrial robot arms has been mostly limited to the standard robot motion cycle, where a robot and gripper will move a part as shown in Fig. 1. The up, over and place motions, referred to as the ‘‘Work Motion’‘, produces a useful operation. The other up, over and down motion, referred to as the ‘‘Return Motion’‘, is wasted time and energy. It is required as the robot and gripper must return to complete the motion cycle. And except in limited cases where two SCARA arms can coordinate their motion, the ‘‘Return Motion’‘ also occupies 3 dimensional space such that no other robot can move the next part during that time.

This can lead to a very inefficient use of time in many production situations. Or it can lead to the designing of very fast robots (using accelerations and decelerations of up to 10 g’s) that often move or place the carried part so roughly that the part flies out from the gripper, misses its target, or gets damages by the high g loading.

This article discusses the design and performance of a novel robot system called the Trackbottm. It was invented by the authors, and is patent pending. It has many unique design characteristics, and these characteristics yield a set of motion strategies unlike most single robots today. 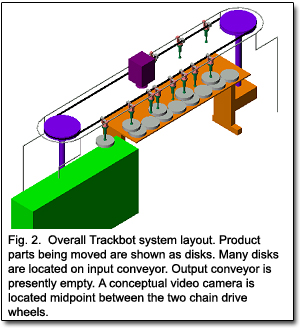 The robot system has a rigid track to carry the multiple individual robot heads, or Bots. A constantly moving drive chain is used as the motion source so as to not have a drive motor on each Bot, thus saving weight. Fig. 2 shows the overall concept.

The product parts are represented as simple disks, but in practice can be any size and shape part, potentially a mixed group. The overhead vision camera represents the possibly use of multiple cameras in order to have a field of vision large enough to recognize the location of the parts on the conveyor.

The moving drive chain runs at a constant speed, while each Bot has the mechanisms to ‘‘grab’‘ or ‘‘release’‘ from the chain, conceptually similar to ski lift. Though perhaps obvious, this design does not permit one Bot to pass the one ahead of it. And direct contact of Bots would constitute a collision. 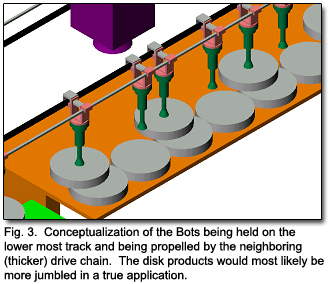 Shown in Fig. 4 is the prototype Trackbottm robotic material handing system. Shown are 4 Bots on one of the straight sections of an oval track. The overall system is 13 feet long, 5 feet wide, and 6 feet high. Smaller configurations can be assembled.

Each Bot has a telescoping Z-axis of motion with a vacuum cup at the Bottom. Each Bot has its own internal Pentium based single board computer. An infrared (IR) communication device is located near the top of each Bot, allowing wireless communication. Upon the passing of the IR station, the programmed instructions for each Bot are updated. After receiving such an update, each Bot operates autonomously. 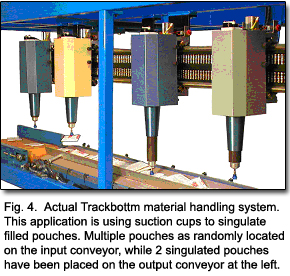 The rail and chain system is shown in Fig. 5. It consists of two metallic conductive rails and two chains. The conductive rails allow for 12-volt power to be supplied to each Bot through their conductive wheels. The upper chain remains stationary, while the lower chain moves at a constant speed.  Each Bot has 2 cogs that are always engaged into the chains, and are actuated by a clutch pack. The lower cog is clutched to restrict its rotation to enable movement along with the chain. The upper cog is rotating while engaging the upper chain, giving positional information. Releasing the lower cog’s clutch and clutching the upper cog achieves stopping. This applies a braking action in a repeatable way. The positional accuracy is within 0.25 inches, which serves the projected market applications sufficiently. 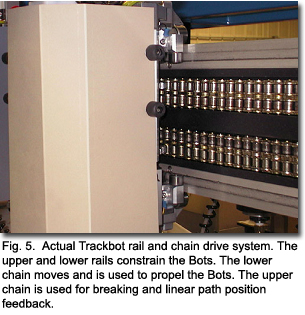 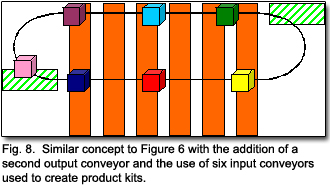 Bot Wave Motion
Since the track is a closed loop and Bots cannot pass each other, the optimum motion has been investigated. It was found that Bots moving in waves of 3 or 4 create the greatest throughput with the minimal track chain speed. The wave motion behaves similar to a group of cars in a single lane in a high volume traffic situation. It is best that the entire wave come to a stop at the same time, pick up its product, and accelerate as a group. Then, right on its heals, is the next wave looking to access the product to be picked.

This topic, as well as the control architecture, is covered in other technical papers from the authors.

Conclusions
The closed loop track based multi-head robot discussed in this paper can have a significant impact on overall cycle time. For short distances, the system can be twice as efficient than a traditional robot. For longer distances the system can reach a factor of 4 times the throughput.