Introduction
Because they are individual emitters, the pixels in OLED (organic light-emitting diode), miniLED, and microLED displays can exhibit broad variability in luminance and color output from pixel to pixel. This variability manifests as non-uniformity or mura across the display, resulting in low yield of acceptable displays, rejection of expensive components, or costly rework. Automated visual inspection of displays has been proven for identification of defects like non-uniformity, with quantitative pass-fail results, fast cycle times, and reduced operational costs necessary for mass production and commercialization. For emissive displays, pixel and subpixel measurement methods have enabled the calibration of display uniformity by identifying, measuring, and correcting the luminance output of each pixel, thereby producing displays of entirely uniform appearance. This process—referred to as pixel uniformity correction, or “demura”—relies on the accuracy of pixel-level luminance measurement in order to calculate accurate correction coefficients for each pixel.

Ensuring measurement accuracy for qualification and correction at the pixel level becomes more challenging as the resolution of emissive displays grows and pixels become smaller, more numerous, and closer together. The latest smartphones contain anywhere from two to over four million pixels per display (with three or four times the number of subpixels) at 400 to over 500 pixels per inch (PPI). To increase the accuracy and repeatability of measured pixel-level luminance values, image-based display measurement systems must apply several image sensor pixels across each display pixel. However, covering and isolating each display pixel using multiple image sensor pixels is challenging, especially when sensor resolution of the measurement system is limited relative to the high quantity of pixels in the display. Measuring a display using multiple images can increase the effective imaging resolution per pixel, but single-image measurement is important for correcting a display at low takt times, supporting efficient high-volume production processes and commercialization of new display types.

Pixel-level measurement relies first on pixel registration, a method of dynamically locating and setting a region of interest (ROI) around each pixel in the measurement image. This technique was originally patented by US7907154B21 for the purposes of measuring individual LED pixels in large-format outdoor screens,where measurements are performed over long periods of time and multi-image measurement of a single display is common. In these applications, ROI are set as a uniform grid aligned to the image sensor array. This is adequate for multi-image measurement, which increases sensor resolution per display pixel. However, smaller displays (i.e., smartphones, watches, or microdisplays) require single-image measurement to ensure production speeds, which reduces sensor resolution per display pixel. In these cases, it is unlikely that the center of a display pixel will be aligned with the center of a sensor pixel, increasing moiré effects at each display pixel and reducing the ability of the ROI to precisely cover and isolate each display pixel.

A new pixel registration and measurement method uses fractional image sensor pixels to improve pixel-level measurement accuracy for today’s high-resolution displays. This method sets a display pixel ROI based on a floating-point limit (rather than centering the ROI on the image sensor pixel). Then, the method isolates the fractional sensor pixel area contained within the ROI to calculate a measurement, thereby improving the precision of measured luminance values over traditional (whole pixel) methods for display qualification and demura. The benefit of a fractional pixel method is accurate display pixel or subpixel measurement using reduced imaging resolution, enabling optimization of the measurement system for testing speed and cost effectiveness. 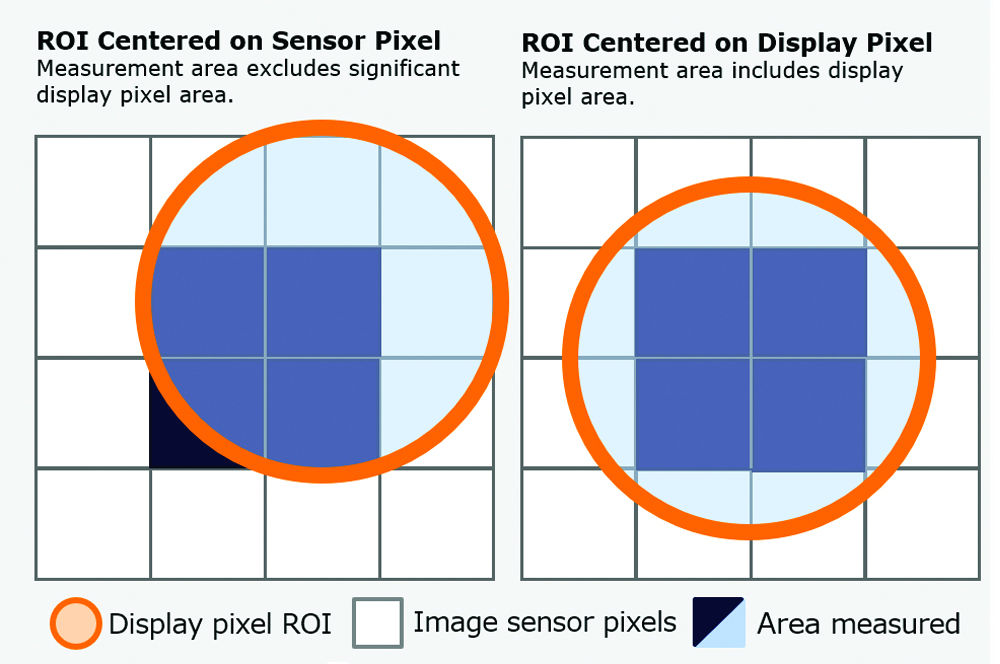 In contrast to traditional whole pixel methods, a fractional approach determines an ROI that better approximates the limits of a display pixel by weighting the average luminance values across image sensor pixels to determine a center of gravity for each display pixel (as shown in Figure 1, right). In other words, a floating-point representation (i.e., fraction) of a number of sensor pixels is used. This ROI can be very precisely defined. Accordingly, a fractional pixel method can provide more accurate registration of even closely spaced pixels and subpixels than whole pixel methods using a single-image measurement, where imaging system resolution is limited. 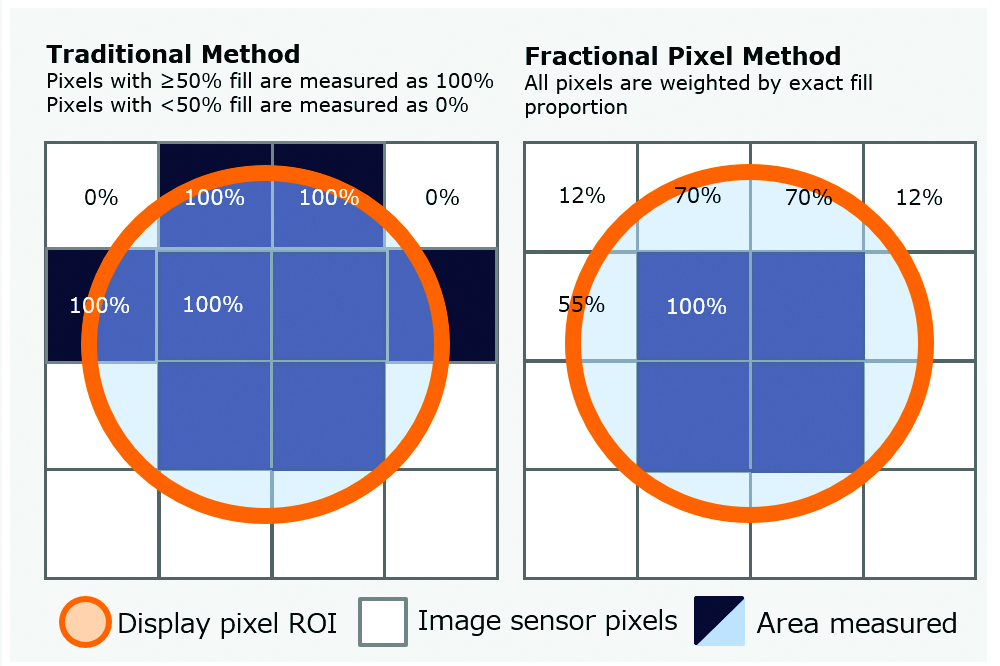 Figures 3 and 4 depict the fractional pixel measurement method, as in US Patent 10971044.2 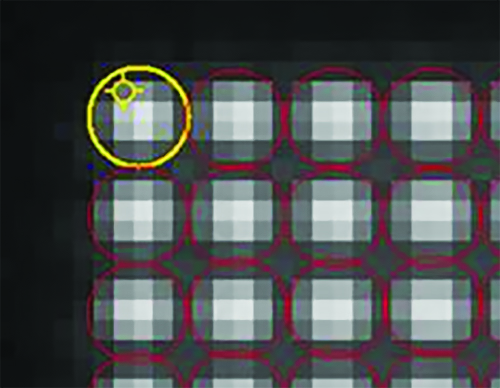 Figure 3 - A portion of a display measurement image with ROI whose center is aligned to the display pixel center. 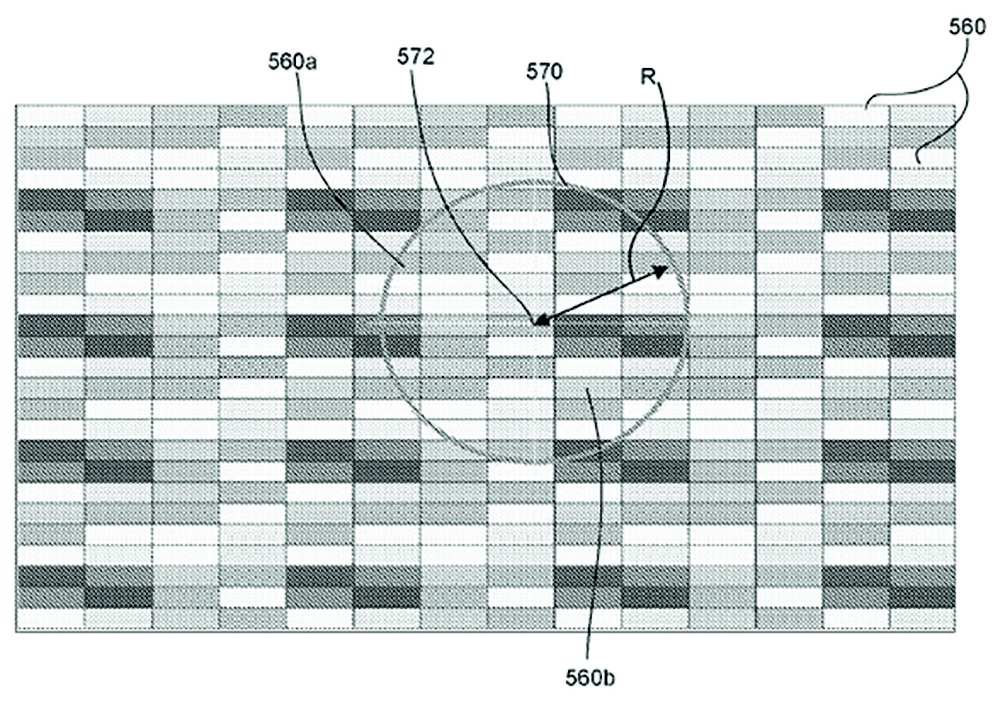 Figure 4 - A schematic illustration of display pixels (560) and a single circular ROI (570) having a center (572) and a radius (R). Some of the sensor pixels (560b) are wholly contained within the ROI, while other sensor pixels (560a) are partially inside and partially outside the ROI. 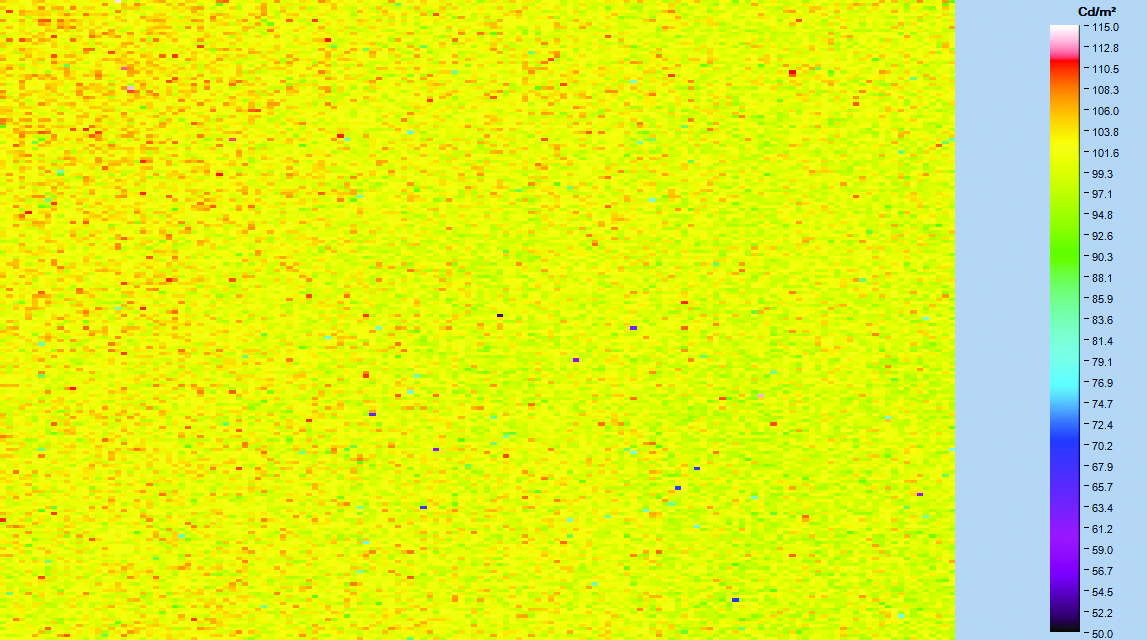 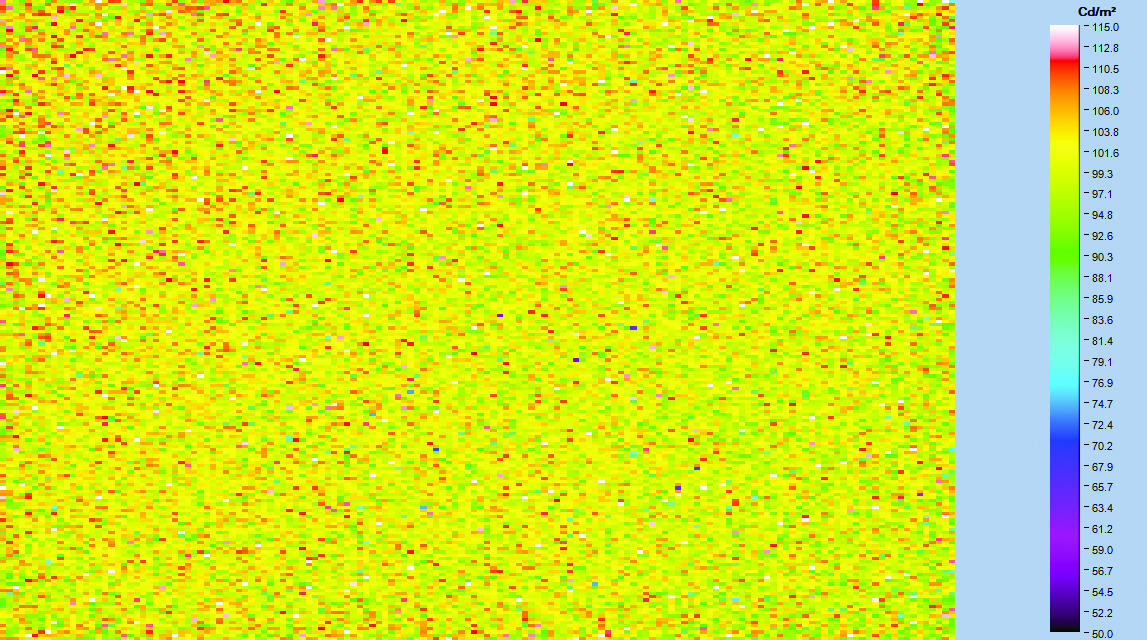 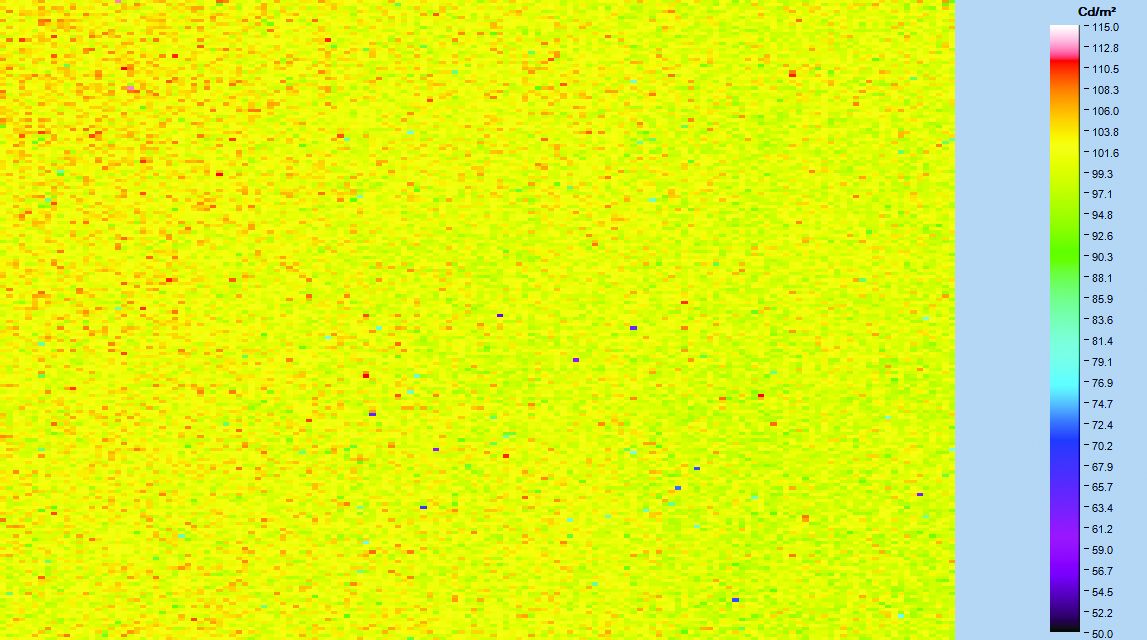 Results
Figures 10 and 11 plot the pixel-level luminance values measured for a single row of pixels using whole and fractional pixel methods, as compared to the reference (true) luminance of each pixel. In Figure 10, the fractional pixel (solid orange line) and reference (solid gray line) measurements are shown to have a close match, while whole pixel measurements (dotted blue line) exhibit a noticeable deviation from reference values. Further, Figure 11 plots the percentage error in luminance (ΔLv, %) measured for each pixel by whole and fractional methods as compared with the reference luminance values. As evidence of the accuracy of the fractional pixel measurement method, the pixel-level luminance values obtained by this method exhibit minimal deviation from the reference values, less than 2%. This indicates that a measurement system with standard resolution is able to achieve comparable pixel-level luminance accuracy to an extremely high-resolution measurement system during single-image capture when a fractional pixel method is applied. The whole pixel measurement method deviates from the reference values as much as 10%. This deviation indicates misalignment of the measurement ROI with the display pixels, and exclusion or inclusion of significant luminance data for each pixel. In cases where correction (demura) is applied, inaccurate correction factors may be calculated from this data. The application of inaccurate correction factors manifests as residual or additional mura in the “corrected” display.