When a risk assessment shows that a machine or process carries a risk of injury the hazard must be eliminated or contained. How this is done will depend on the nature of the machine and the hazard. In basic terms this means preventing any access to the relevant parts while they are in a dangerous condition. The best choice of protective measure is a device or system that provides the maximum protection with the minimum impact on normal machine operation. It is important that all aspects of machine use are considered, as experience shows that a safety system which is difficult to use is more liable to be removed or by-passed.

The following provides a brief overview of the characteristics of the most commonly used devices. 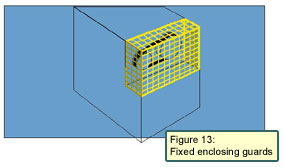 Fixed Enclosing Guards
If the hazard is on a part of the machinery which does not require access it should be permanently guarded with fixed enclosing guards.

Movable Guards with Interlocking Switches
If access is required there needs to be a movable (openable) guard which is interlocked with  the power source of the hazard in a manner which ensures that whenever the guard door is not closed the hazard power will be switched off. This approach involves the use of an interlock switch fitted to the guard door. The control of the power source of the hazard is routed through the safety contacts of the switch. The power source is usually electrical but it could also be pneumatic or hydraulic. When guard door movement (opening) is detected the interlock switch will isolate the hazard power supply either directly or via a power contactor (or valve). 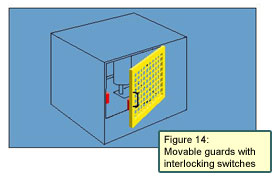 Some interlock switches also incorporate a locking device which locks the guard door closed and will not release it until the machine is in a safe condition. For many applications the combination of a movable guard and an interlock switch with or without guard locking is a reliable and cost effective solution.

Two-Hand Controls
There are other ways of preventing access while the machine is in a dangerous condition. The use of two-hand controls is common on certain types of machinery. Two start buttons have to be operated at the same time to run the machine. This ensures that both hands of the operator are occupied in a safe position (i.e. at the controls) and therefore cannot be in the hazard area. 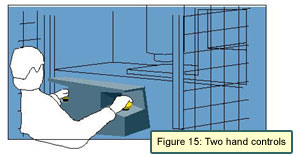 Note: This type of measure only protects the operator and does not give protection to other personnel.

A two-hand control system depends heavily on the integrity of its control and monitoring system to detect any faults, so it is important that this aspect is designed to the correct specification.

The physical design should prevent improper operation (e.g. by hand and elbow). The installation must also meet the safety distance requirements from the hazardous location.

The machine should not go from one cycle to another without the releasing and pressing of both buttons. This prevents the possibility of both buttons being blocked, leaving the machine running continuously.

Releasing of either button must cause the machine to stop.

The use of two-hand control should be considered with caution as it usually leaves some form of risk exposed.

It is very useful however on applications such as teach mode pendants and inching controls because it can give enhanced levels of protection when used in conjunction with other protective devices.

When frequent access is required physical guarding at the hazard is sometimes too restrictive for part loading or adjustment. In this situation a device is required which prevents dangerous motion while allowing unrestricted access by sensing the presence of the operator and sending a stop signal. 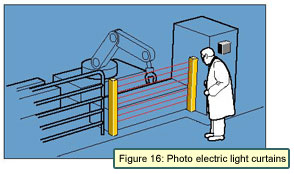 Photo Electric Light Curtains
These devices emit a ‘‘curtain’‘ of harmless infrared light beams in front of the hazard area. When any of the beams are blocked the light curtain control circuit sends a stop signal to the guarded machine. There are many factors which affect the type and positioning of a light curtain and these are dealt with in the standard EN 999 ‘‘The positioning of protective equipment in respect of approach speeds of parts of the human body’‘.

Light curtains are extremely versatile and can guard areas many meters wide. By the use of mirrors the light beams can be diverted round corners to enclose a machine. They are available with different light beam spacings making them suitable for many applications ranging from totally enclosing perimeter guards for industrial robots, to point of access guard for certain types of presses. 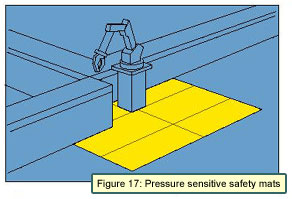 Pressure Sensitive Safety Mats
These devices are used to guard the floor area around a machine. A matrix of inter-connected mats is laid around the hazard area and the proper amount of pressure (e.g. an operator’s footstep) will cause the mat control unit to send a stop signal to the guarded machine.

Pressure sensitive mats are often used within an enclosed area containing several machines e.g. flexible manufacturing or robotics cells. When access is required into the cell (for setting or robot ‘‘teaching’‘ for example) they prevent dangerous motion if the operator strays from the safe area.

The size and positioning of the mats should be calculated using the formulae from the standard EN 999 ‘‘The positioning of protective equipment in respect of approach speeds of parts of the human body’‘. 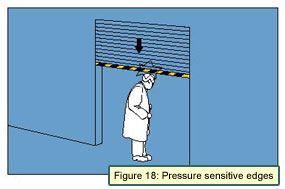 Pressure Sensitive Edges
These devices are flexible edging strips which can be fixed to the edge of a moving part such as a machine table or powered door where there is a risk of a crushing or shearing hazard.

If the moving part strikes the operator (or vice versa) the flexible sensitive edge is depressed and will send a stop signal to the power source. Sensitive edges can also be used to guard machinery where there is a risk of operator entanglement. If an operator becomes caught up and dragged by the machine he will be pulled onto the sensitive edge thereby tripping its switching action.

Light curtains, safety mats and pressure sensitive edges can all be classed as ‘‘trip devices’‘. They do not restrict access but only ‘‘sense’‘ it. They rely entirely on their ability to both sense and switch for the provision of safety therefore it is important that their control circuit be control reliable. Also they must only be used in correct applications. In general they are only suitable on machines which stop immediately after removal of power. Because an operator can walk or reach directly into the hazard area it is necessary that the time taken for the motion to stop is less than that required for the operator to reach the hazard after tripping the device. 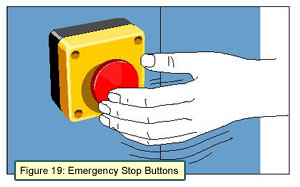 Emergency Stops
Wherever there is a danger of an operator getting into trouble on a machine an emergency stop device must be readily available.

Emergency Stop Buttons
The usual way of providing this is in the form of a mushroom headed push button which the operator strikes in the event of an emergency. They must be strategically placed in sufficient quantity around the machine to ensure that there is always one in reach at a hazard point. 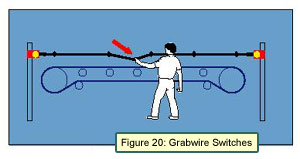 Grabwire Switches
For machinery such as conveyors etc., it is often more convenient and effective to use a grabwire device along the hazard area. These devices use a steel wire rope connected to latching pull switches so that pulling on the rope will operate the switch and cut off the machine power.

Telescopic Trip Switches
Other variations include telescopic antenna switches where deflection of the antenna causes the switch to cut off the machine power. These devices are more commonly used as trip 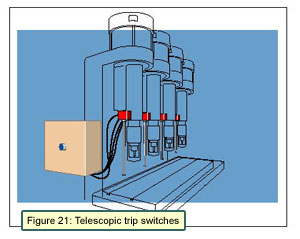 devices on machinery such as pillar drills. The switch is mounted on the drill and the antenna is extended down next to the drill bit. In the event of the operator becoming entangled with the drill he will be pulled onto the antenna which operates the switch.