In this white paper, we give an overview of the use and advantages of (single-walled) carbon nanotubes in a variety of applications. Furthermore, we show some examples of how deeply cooled scientific SWIR InGaAs cameras are being used as enabling technologies for luminescence-based imaging of nanotubes.

Single-walled carbon nanotubes (SWNTs) consist of a monolayer of graphene rolled into a cylinder with nanometer diameters and high aspect ratio. SWNTs have attracted a lot of interest in recent years because of their promising applications in a variety of fields, such as medical science or in-vivo bio-imaging, photonics and (opto)electronics.

SWNTs, especially semiconducting SWNTs or s-SWNTs, could be used for many applications in photonics and optoelectronics. However the implementation in light-emitting devices has been impeded in the past by their low emission efficiencies and broad spectra [JAK].

Networks of s-SWNTs have attracted much attention as a promising way to obtain high-mobility solution-processed field-effect transistors (FETs). Random network FETs produced from nanotubes exhibit high mobilities as well as high on/off resistance ratios. They can be used in complementary-like inverters for fast ring oscillators, or as switches in active matrix organic light-emitting diode (LED) displays. The use of networks of nanotubes with different diameters and different band gaps and mobilities raises the question of how current density is distributed within the channel.

An intriguing feature of semiconducting carbon nanotubes is their luminescence that originates from the recombination of excitons, i.e., electron-hole pairs. The excitons can be generated by absorption of light (photoluminescence, PL) or by electroluminescence (EL), in which electron-hole pairs are created electrically. Efficient light emitting devices with selectable emission wavelengths and narrow line width relying only on carbon-based materials are highly desirable in photonics applications. However, when using FETs based on random networks of semiconducting nanotubes, tracing the near- and short wave infrared emission during a gate voltage sweep allows one to visualize preferential current paths and consequently to gain insight into the charge transport in these networks. Sensitive SWIR cameras, typically using a deeply cooled InGaAs detector, such as the Xeva 1.7 320 TE3 from Xenics, are used to image SWIR electroluminescence centered at a wavelength of approximately 1200 nm.  EL research with sensitive SWIR cameras will help to better understand the operation of FETs based on s-SWNTs [JAK].

SWNTs have recently emerged as an engineered nanomaterial readily adaptable for use in neuroscience and general bioimaging [JAC]. Bioimaging based on fluorescence enables the visualization of dynamic biological processes in great detail and is a crucial tool in the diagnosis of diseases such as cancer. Bio-imaging is highly complementary to other imaging techniques such as magnetic resonance imaging (MRI), ultrasound and computed tomography (CT) [BRU, HEM].

The suitability of SWNTs to these applications arises from their small size (~nm diameter; ~µm length), their biocompatibility and their inherent photoluminescence (in medical applications often the term fluorescence is used) that falls within the so-called “biological windows”. For in-vivo biological imaging, typically two “windows” in the near and shortwave infrared are used coinciding with local minima in the absorbance and scattering spectra of water, blood and living tissue. The first window is NIR-I and ranges approximately from 700 to 950 nm; the second window is NIR-II (or SWIR) and ranges from approximately from 950 to 1700 nm [JAC]. In the SWIR region, the minimal autofluorescence of biological tissue leads to increased sensitivity, while the reduced light attenuation from scattering and absorption by blood and other structures enables imaging with high spatio-temporal resolution and penetration depth [BRU].

Moreover, the use of SWNTs can be expanded beyond their use as a contrast agent in bioimaging by functionalizing them with biomimetic polymers to recognize biological analytes, thus enabling their use as biosensors [JAC]. This selectivity for targeted imaging can also pave the way for real-time in-vivo neuroscience imaging applications.

In recent years, research groups around the world have been developing different fluorescence agents with a more pronounced shift to the NIR-II or SWIR biological window for in-vivo imaging. Moreover, with the commercialization of affordable InGaAs SWIR cameras that show excellent sensitivity and quantum efficiency in the wavelength range above 1000 nm, in-vivo imaging utilizing NIR-II or SWIR emitting fluorescence agents has become more accessible. For instance, Shimadzu (Kyoto, Japan) developed the portable SAI-1000 in-vivo bioimaging system equipped with a SWIR InGaAs camera [HEM, XU]. This system is developed for small-animal imaging for preclinical research with the ultimate goal of earlier disease detection in human patients.

In literature, one can find that bio-imaging research is typically based on one of three nanomaterials for fluorescent agents [HEM]:

At the moment, SWNTs are the most mature of the three approaches and demonstrate good emission in the SWIR range and low toxicity. Rare-earth-doped nanoparticles (example see Fig.2) and quantum dots [BRU] have recently also shown great promise with low-toxicity and emission that is tunable to different wavelengths. Recently, different publications have shown that SWIR cameras are used in in-vivo bioimaging applications to visualize fluorescence from all three types of agents [ZAK, XU]. 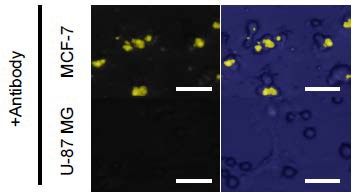 To conclude, SWNTs are being utilized across a multitude of industries. Through the examples described in this article, SWIR cameras have proven to be extremely effective tools in enabling these applications.

Our world is three-dimensional, robots and tools need to relate to their surroundings in 3D.