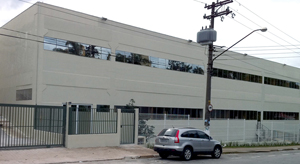 The two divisions have outgrown their current separate facilities and will co-locate to a newly constructed, larger manufacturing campus in Diadema, featuring 56,000 sq ft manufacturing space, 38,000 sq ft office space and a 6,000 sq ft training space, for a total space of over 100,000 sq ft.  Both divisions will gain increased efficiencies and production capacity through co-locating, but will remain as independent divisions. Both divisions will be fully operational by mid-July.  Approximately 150 employees will be located on the new campus.

“With expanded manufacturing and demonstration floor space, new training labs and additional office space, the new infrastructure will provide even closer cooperation between our two divisions allowing us to better serve our customers in this growing market,” states Steve Barhorst, President and COO of Yaskawa America, Inc., Motoman Robotics Division.

“The new location will allow us to serve our customers more efficiently while allowing us to collaborate on opportunities between our divisions to offer more solutions to our customers,” adds Mike Knapek, President and COO, Drives and Motion Division.

Brazil is one of the fastest growing emerging economies in the world.  With significant growth in automotive, agricultural and mining equipment, in addition to food production and other manufacturing sectors, Brazil’s economy ranks highest among all South American countries with a strong position in global economy.

The Drives & Motion Division, which includes Yaskawa Eléctrico do Brasil Ltda, provides industrial control and automation products to markets in the Americas.  North American based operations include R&D, design and product engineering and two assembly plants producing inverters, servo motors and custom industrial panels.  Drives and servo systems are applicable to a wide variety of automation tasks in a wide variety of industries.

The Motoman Robotics Division, which includes Motoman Robótica do Brasil, is one of the largest robotics companies in the Americas with an installed base of approximately 32,000 units.  Its products include robotic automation solutions for virtually every industry and robotic application, including arc welding, assembly, coating, dispensing, material handling, material cutting, material removal, packaging, palletizing and spot welding operations.