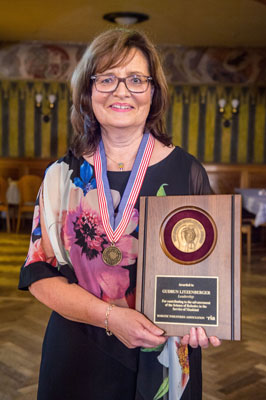 Frankfurt, Munich — The General Secretary of the International Federation of Robotics, Gudrun Litzenberger, has received the Joseph F. Engelberger Robotics Award. The jury honored her achievements in robotics with the world's most important industry award in the "Leadership" category. As head of the IFR Statistical Department, Litzenberger advanced the World Robotics Statistics and has been working for more than a decade to improve our understanding of the global robotics market.

“Gudrun Litzenberger has spent much of her career helping our industry better understand the size and scope of the global robotics market,” said Jeff Burnstein, RIA president. “Her work has established the IFR as the leading source of global robotics statistics during an era when the interest in robotics is growing exponentially. Furthermore, Gudrun has been a tireless advocate for our industry throughout the world.”

Ambassador of Robotics
“The Engelberger Robotics Award is a success for my entire team,” says Gudrun Litzenberger, General Secretary of the International Federation of Robotics. “We all share a great passion for robotics. We are very proud to know that organizations around the world and governments use our statistics. IFR’s valid data are very important because they provide clear insights into the use of robots all over the world and their effects on the economy.“Gudrun Litzenberger has been working for the German Engineering Federation (VDMA) since 1986. In 2002, she transferred to the VDMA Robotics and Automation Association, where she was responsible for statistics. Litzenberger then took over the responsibility for World Robotics Statistics in 2003 and since 2005 has been in charge of the annual IFR World Robotics Report. Today, this study is considered the most important source for global robot statistics and covers all market-relevant activities of industrial and service robots. Gudrun Litzenberger has been General Secretary of the IFR since 2008. The International Federation of Robotics represents more than 50 manufacturers of industrial robots and national robot associations from over twenty countries and was founded in 1987 as a non-profit organization.

About the Joseph F. Engelberger Robotics Award
The award is named for Joseph F. Engelberger, known throughout the world as the ”father of robotics.” Engelberger was founder and president of Unimation, Inc., the world’s first industrial robot manufacturer. The Engelberger Robotics awards are presented to individuals for excellence in technology development, application, education and leadership in the robotics industry. Each winner receives a $5,000 honorarium and commemorative medallion with the inscription, “Contributing to the advancement of the science of robotics in the service of mankind.”