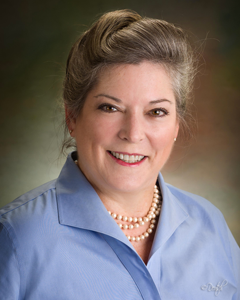 Roberta Nelson Shea is Universal Robots’ new Global Technical Compliance Officer. She has chaired the U.S. National Robot Safety Committee for 23 years, spent 35+ years within manufacturing automation, and is recognized as a global authority on robot safety  - most recently as Convenor of the ISO committee publishing technical specifications on risk assessments of collaborative robots.

Odense, Denmark, September 9, 2016: Reach for the stars. That’s what Universal Robots did in their search for a new Global Technical Compliance Officer as the company’s R&D department identified the global top 3 experts within robot safety and technical standards. Roberta Nelson Shea was one of the three identified, and by a stroke of luck, she applied for the job herself:

“I heard about the vacant position as GTCO through my network, and it seemed like this opportunity was tailor made for my resume. I was not looking for a new job, but this is wonderful confluence of circumstances,” said Nelson.

“We are at the start of a new generation of robotics with Universal Robots as a young and vibrant first mover.  Their collaborative robot arms have made human-robot collaboration possible, ushering in a wide range of, new viable robot applications. The company is looking at robots with a different lens, bringing a breath of fresh air to the industry.”

R&D Director at Universal Robots, Mogens Saigal, is extremely pleased with the recruitment:

“Roberta Nelson Shea joining Universal Robots is news that will definitely reverberate throughout the global robot industry. She is a very great asset and a strong voice within the field of robot safety. We are both proud and excited that she is now part of our company.”

The innovative, Danish robot manufacturer developed and sold the world’ first collaborative robot; or cobot, which is able to operate safely alongside employees. In opening up the market, Universal Robots spurred both larger, established robot manufacturers as well as other robotics startups to start developing and launching cobots. Universal Robots remains the market leader with more cobots sold than all competitors combined.

“With our technology advancements, there is growing potential to safely combine the power and precision of robots with the creative and problem-solving ability of humans. Technical standards and specifications are always lagging behind technological change. But earlier this year, the ISO Committee published a new technical specification, which opened up many opportunities for the whole industry,” said Saigal.

Roberta Nelson Shea has a BS in Mechanical Engineering and a Masters of Engineering in Advanced Safety Engineering and Management. She has been selected as one of the top 100 Women in Safety by ASSE. Her curriculum vitae encompasses management positions at Rockwell Automation, Symbotic LLC, Applied Manufacturing Technologies, Pilz Automation Safety L.P., Honeywell, and Procter & Gamble Manufacturing Company.

”Robotics has been my passion for more than 30 years, they relieve workers from having to do tedious, strenuous tasks and create more enjoyable jobs while employers improve productivity,” said Nelson Shea.

“My overall mission is to demystify robots and make sure that the deployment barriers are broken down. I am an advocate of global harmonization of safety requirements to reduce costs of designs, manufacturing, and compliance.”

Roberta Nelson Shea spent the past 23 years as the Chair (now Chair Emeritus) of ANSI/RIA R15.06 Robot Safety Committee that develops and defines technical standards for industrial robots. The latest R15.06 edition is a US adoption of ISO 10218-1 and -2.

The new Global Technical Compliance Officer succeeds Lasse Kieffer. He was recruited by the founders of Universal Robots as the very first full-time employee in 2007.

“It has been an absolutely fantastic journey with an overwhelming stream of inspiring challenges. Every single year in this career has been like having a new job. We started out as three nerds and now we are approaching 300 employees.”

Lasse Kieffer is now ready to return to the start-up mission.

“I loved my job at Universal Robots, but I felt like starting from scratch again and am right now developing ideas for new ventures. It was the right time to pass the baton and I am especially pleased that it will be to Roberta Nelson Shea.”

Universal Robots’ new GTCO will start her employment September 19, spending a lot of her time in the Headquarters of Universal Robots in Odense, Denmark.

About Universal Robots
Universal Robots is the result of many years of intensive research at Denmark's successful robot cluster, which is located in Odense, Denmark. The company was co-founded in 2005 by the company’s CTO, Esben Østergaard, who wanted to make robot technology accessible to all by developing small, user-friendly, reasonably priced, flexible industrial robots that are safe to work  with and  on their own can be used to  streamline processes in the industry. The product portfolio includes the collaborative UR3, UR5 and UR10 robotic arms named after their payload in kilos. Since the first UR robot launched in December 2008, the company has experienced considerable growth with the user-friendly robots now sold in more than 50 countries worldwide. At just 195 days, the average payback period for UR robots is the fastest in the industry. The company, a part of Boston-based Teradyne Inc., is headquartered in Odense and has subsidiaries and regional offices in the U.S., Spain, Germany, Singapore, Czech Republic, India, and China. Universal Robots has more than 270 employees worldwide.