With more than 210,000 robots installed worldwide, Kawasaki is a leading supplier of industrial robots and robotic automation systems with a broad product portfolio, able to service a wide range of applications across diverse industries. Kawasaki has incorporated 50 years of experience as a robot industry leader into the development of the most technically advanced controllers and the highest quality robots. Kawasaki Robotics (USA), Inc. is a subsidiary company of Kawasaki Heavy Industries, Ltd., Robot Division of Japan, and is headquartered in Wixom, Michigan, with sales and service offices in North and South America.

With a small footprint and low price tag, the easy to program and deploy “duAro” offers robot automation possibilities to companies of all sizes

It's a common misconception that integrating robots means spending a lot to completely overhaul production lines and start from scratch.  In 2016, Kawasaki introduced the highly innovative human-friendly industrial SCARA robot named duAro whose mobile design and safety functionality make it ideal for companies of any size.  Integrating the duAro into a manufacturing process is a relatively simple change that can benefit the bottom line and relieve employees from performing menial tasks. 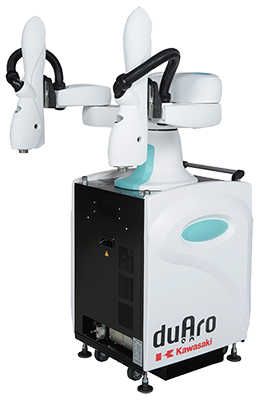 The duAro is the first dual-armed horizontal articulated robot to operate on a single axis.  This configuration enables the robot to perform coordinated movements, much like a human, making it perfect for applications such as small-part inspection, assembly, material handling, material removal and machine tending.  As the robot is designed to fit into a single-person space, it can easily be deployed without modifications to any assembly or manufacturing line.  The mobile base on which the dual-arms are placed also accommodates the controller, allowing the user to move the unit to any location desired.

The duAro’s design also reflects the need to keep its human co-workers safe.  Low-power motors, a soft body, speed and work zone monitoring, and a deceleration function allows the duAro to safely collaborate with humans in work operations. In the unlikely event of a collision, the collision detection function instantaneously stops the robot’s movement.  The duAro robot is not only safe but it’s also smart.  The direct teach function allows for the user to teach the robot tasks by hand guiding its arms. In addition, the robot can be programmed through a tablet terminal by entering numerical values indicating the direction and distance of each movement. This user-friendly robot with a small installation footprint and mobile base is also perfect for high mix, low volume production.

Two Kawasaki dual-arm duAro robots were installed at a Tier 1 auto parts supplier to work together in a machine tending application.  With the implementation of these two robots the supplier was able to double their throughput and eliminate errors.  This turnkey solution took about 9 weeks to implement from initial design to commissioning, and an additional week was used to train employees on how to operate the system.  The design, build and commissioning of a single unit to a turnkey system can range anywhere from a week to 2-3 months.  With a base price of $33,000, the duAro is a safe, affordable, easy to operate, collaborative robot that can meet the demands for flexible manufacturing.

Demonstration of a robotic kitchen using two UR5 robot arms