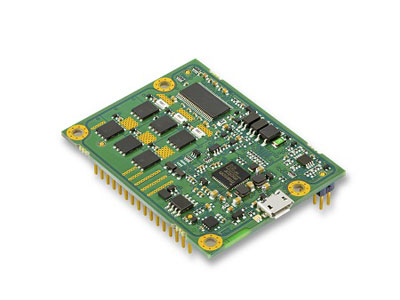 This is a brushless DC motor controller with two different power ratings and connector board to allow quick integration into machinery. The position controllers are suitable for dynamic control of brushed and brushless dc motors with up to 750-W continuous and 1,500-W peak power.

‘A couple things led us to develop the new Easy-to-use Positioning System (EPOS). We pride ourselves on staying up with technology and continually innovating. This is a position controller that’s two and a half times faster than our EPOS2 controllers. It’s not going to replace those controllers but complement them.

Engineers may have an application that doesn’t need sophisticated position control, but something that’s fast. This is where maxon motor’s EPOS4 controller works — to satisfy applications that need something in between high-end control and lower-end Digital Signal Processor (DSP)-based systems.

‘Over the years, we’ve had customers ask us to make controllers more compact and with a higher power density. That is another thing that drove us to develop the EPOS4. The controller’s pin headers are part of the main board, so are fixed, what is detachable is a compact board that goes on top of the main board for easy setup and quick builds of one-off applications.

EPOS positioning controllers for quick connections
Think about it: If an engineer is doing some feasibility analysis or proof-of-concept work, a traditional controller design would force that engineer to get in there and solder to the pins directly —and risk short-circuiting other pins or damaging the board itself.

In contrast, our EPOS4 accepts a compact board that engineers can buy and then place on the EPOS4 and then easily use the connectors there to connect different types of motors and power supplies and other motion components to complete feasibility tests.

In fact, the modular design extends to other feature on the controller as well. We’ve added an optional heat sink to boost controller-board capacity. We also recommend additional heat sinks to get higher current capacity at higher temperatures.

The base-model board without a heat sink outputs 8 A. With the heat sink we can go to 15A continuous, add an additional heat sink and the controller can output 15A even in ambient environments exceeding 70 to 75° C, under full load.

In fact, the controller is a true EtherCAT slave device and we see that as an important feature with everyone moving to the Ethernet. My personal opinion on this matter is that there’s a big push toward EtherCAT because everyone wants to have the ability to mention EtherCAT connectivity in their marketing, even beyond the real-world benefits of the standard. That’s another reason we gave the EPOS4 EtherCAT communication.

We offer EPOS Studio software (at no charge) so engineers can do more configuration and proof-of-concept feasibility analysis. We have a data recorder in the Studio software as well. It’s easy to use, and it includes a simple scope function. There are four channels that engineers can use to monitor things such as position and then see how the command compares to what the motor’s actually doing.

EPOS Studio software can read all these values and compare them. It’s very useful for configuring the drive — but again, it can also do a lot more. Users can just input simple moves and record all the data related to the motion output to get a better idea of how their system is working.

Precision Motion Control Technology - An Inside View at ACS