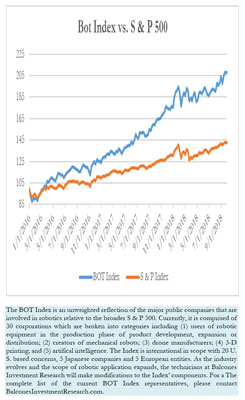 Both the Bot Index and the S & P 500 produced minimal losses during the final week of the third quarter. Irrespective of the combined results producing insignificant returns, at the distribution tails there was quite a different story. Seven of the thirty Index components produced gains exceeding 3% for the week, while eight experienced losses greater than 4%. Of the gainers, NVIDIA Corp. enjoyed one of the most significant returns for the week. The 6.67% improvement in the company’s shares was due, in part, to an Evercore report that upped their market expectation of NVDA to the $400 level. The stock is currently trading at $281. Furthermore, Evercore commented that the company is, “being on the cusp of a tipping point in that the company is becoming THE Artificial Intelligence standard platform.” Joining NVIDIA as a strong performer included Accuray Inc. whose 9.76% gain was a result of a Zach’s report on the company’s cyberknife’s effectiveness in prostrate surgery. IRobot popped 5.58% when The Motley Fool produced an article entitled, “2 Monster Stocks in the Making”, featuring the company. AeroVironment rose 4.67% when Jim Cramer mentioned on Mad Money, “I would like to be able to stay in and buy more” of the stock. Northrup Grumman improved 3.48% on a spate of articles regarding the company’s participation in hypersonic rockets, Jeff Bezos’ Space Venture and the Administration’s Space Force defense initiative.

On the weaker end of the performance spectrum were, in contrast to the prior week’s strength, several of the Asian names in the Index. Hiwin Technologies declined 9.34%, OMRON Corp. dropped 4.73%, Fanuc slid almost 6% and Yaskawa Electric gave back 10.87%. All were among the best performers in the week ending 9-21-2018. By far the worst performer was the newest edition to the Index’s constituents. NIO declined another 18.74% following the rocky Initial Public Offering on September 11, 2018. The closing price for the quarter, at $6.98 is still above the IPO valuation of $6.26.

Third Quarter is Over. How Did We Do?

As noted in the graph for the quarter, it was only until the start of September that the Bot Index made any appreciable advance over    the broad market. Prominent gainers during the quarter included:

Prominent losers for the third quarter were:

For the Year To Date: 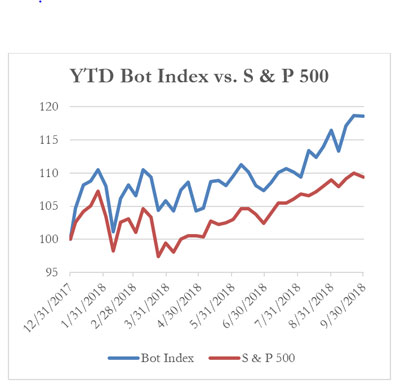 The bot stocks generally led the S & P 500 for the entirety of 2018. As evidenced by the graph, the Bot Index has risen 18.55% thus far in 2018, while the broader market gained 9.43%. During the final two weeks of the third quarter, the Bot Index experienced a new high level exceeding 208 as did the S & P 500. Strong economic numbers provided a significant tailwind for both the robotic companies and the general market. For most of the year the tax cuts stimulated domestic U.S. companies but failed to assist the Asian components of the Bot Index. Further erosion of the Asian companies was experienced during the middle of the year as tariffs and a potential trade war dampened investor perception of earnings opportunities in the region.

Companies that have done well this year to date included:

Stäubli Robotics to exhibit at ATX 2017