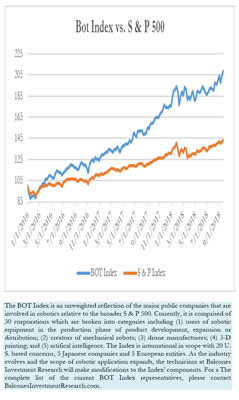 The Bot Index made another historic leap to a new high in trading last week. Several of the components of the index recorded significant upward momentum that carried the index to 208.31. The week ended with the index up 1.54% versus the S & P 500’s .85% gain. The Asian companies within the index certainly carried much of the strength, as all were in positive territory. Yaskawa Electric led the Japanese names with its 11.46% jump, however, OMRON Corp’s 4.22% gain and with Fanuc Corp. and Cyberdyne Inc. each producing advances near 4%, certainly contributed to the index’s superior results. Hiwin Technologies, the index’s only Taiwanese representative added 7.53% to the strong Asian sector.

The best performer for the week was recorded by shares of Mazor Robotics whose 15.93% jump was a result of indications of a takeover. Medtronics has been a long-time minority holder (11.4%) of the company and announced it would seek to acquire the remaining shares. The transaction is valued at $1.64 billion or $58.50 per share. The trading at the week’s end saw the stock at $58.15, leaving little room for much arbitrage in the transaction that is expected to be finalized in the third quarter.

Other stocks that contributed to the index’s new record included Ekso Bionics (gained 8.61%), Accuray Incorporated (rose some 7.89%), Oceaneering International (up 5.82%) and Cognex Corp. (a 4.34% gainer).

Weakness was noted in the most recent addition to the index which was IPO’ed last week. NIO, the Chinese electric auto maker, whose market debut was less than sanguine, crashed (pardon the pun!) some 13.23% for the week. Concerns about the market acceptance of the IPO and increasingly antagonistic trade relations between the U. S. and China contributed to the stock’s poor showing.

When Will It Ever End? Robots and Jobs, Jobs and Robots, Yes and No:

On Friday, the New York Times released an article entitled, “Are Robots Coming for Your Job? Eventually, Yes”. With that auspicious a headline one would imply that the application of robots in the production cycle would result in massive human unemployment. However, the author in his third paragraph stated, “In the near term, occupations are more likely be transformed by digital technology than destroyed by it.” The entire publication made no comment or projection that robots would reduce employment or destroy occupations. Instead, there was a lengthy report on a Connecticut collaborative between government and the Holberton School whose goal is “to double the number of software engineering graduates in Connecticut over the next several years.” The Bot Brief would mention, however, that software engineering is one of the jobs that is most frequently cited as most likely to be replaced by AI and robots.

In a contrary publication included in the August The American Economic Review, authors Costas Arkolakis (Yale), Natalia Ramondo (University of California San Diego), Andres Rodriguez-Clare (Cal Berkeley) and Stephen Yeaple (Penn State) provided an insightful tome entitled, Innovation and Production in the Global Economy. The academicians developed a model of multinational production involving nations that specialize in either the production of goods and services or those that focus on innovation. Noting that “goods are increasingly being produced far from where ideas are created…innovative countries export ideas and import goods.” The article doesn’t specifically cite Adam Smith’s comparative advantage of countries in their international trade, however, the emergence of countries that are using labor production versus intellectual production is evident. The writers highlighted that “Countries that specialize in production worry that low innovation will damage their growth prospects, while countries that specialize in innovation worry that this specialization pattern will reduce the availability of good middle-income jobs.” The model and the data to support the model concluded that “contrary to popular fears, production workers gain everywhere even in countries that further specialize in innovation.” Thus, it might be extrapolated that innovation in robotics and artificial intelligence may not necessarily result in an adverse impact upon production workers even in those countries that are the incubators of corporate disruptors.