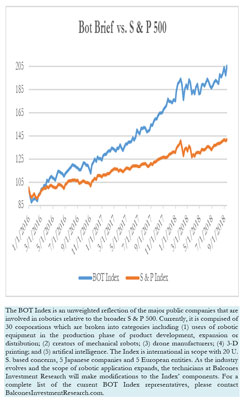 The Bot Index reached a new all-time high level in trading last week as it managed a 3.87% gain, taking the Index to 205.15. The bots exceeded the 1.16% return experienced by the Standard and Poors 500. With the repeg of the S & P at the end of 2015 to match the Bot Index, the returns of the two stock pools have vastly favored robotic companies. Holders of a portfolio to match the Bot Index would be up an aggregate 105+ percent versus a similar broad market portfolio which would have generated 42 percent.

Leading the gainers within the Bot Index was AeroVironment whose stock fortunes gave investors another 16.07%. The stock has been on a strong upward trajectory since its earnings announcement in August. Currently trading at $116.51 the stock has more than doubled since May 18th when it was at $56.09. Continuing to propel the stock has been an avalanche of favorable reports and strategic announcements. This week on CNBC, in an interview with Jim Cramer, the company elaborated on its joint venture with SoftBank which is to create a ‘super cell tower in the sky’. The intent is to have a 100% solar powered drone which would remain in the stratosphere offering world-wide 5G internet connectivity.

Intuitive Surgical and Mazor Robotics each delivered holders greater than 5% during the week as they were both featured in an article entitled ‘Five Medical Device Stocks with Impressive Staying Power’. The article specifically noted the robotic aspect of their product devices as providing more growth engines than their mainstream competitors.

Three industrial names were also featured in a Motley Fool media report. Rockwell Automation, Cognex Corp. and United Technologies were cited as beneficiaries of the Internet of Things concept of data mining within product offerings. Each generated returns exceeding 4% for the week.

Finally, IRobot Corp. gained 5.15% as it was featured in an InvestorPlace article entitled ‘5 Fastest Growing Stock to Buy and Hold’.

NIO’s Debut on the Bot Index Was a Bust Then a Boom:

As was noted in the Bot Brief a few weeks ago, the analysts at Balcones Investment Research had been seeking a suitable replacement for ReWalk Robotics. For a variety of reasons, the firm selected the fledgling electric automobile firm NIO as the RWLK alternative. The company placed an Initial Public Offering on September 11, 2018 with hopes of floating 160 million shares at a price between $6.25 and $8.25. With large investors such as Tencent and Baidu taking a big chunk of the Chinese auto manufacturer, public shares were offered by underwriters representing a Who’s Who of the U.S. financial world. The ultimate pricing came at the very low end of the projected range and fell far short of the $1.8 billion expected capital generation. Possibly because of the weaker than expected initial demand, the stock took an immediate turn downward to the extent of 5 percent by mid-day. In the early afternoon, however, the stock reversed itself and ended up the day increasing 5.4% to $6.60. In the next couple of days, the stock steadily gained momentum and reached a high of $13.80 before ultimately closing the week at $9.90, a three day return of some 58%. With only 160 million shares outstanding the turnover volume has been immense. On the day of IPO, the stock traded 66.8 million shares, on Thursday the volume increased to 158.3 million shares and on Friday the count was 171.9 million. Next week will provide us with a better understanding of the type of trading we might expect from the stock now that some of the initial clatter is likely to subside.