The Bot Index rose 1.64% versus the S & P 500’s .86% gain during the week ending August 24, 2018. The improvement of bot stocks over the market was based on the sparkling results of seven Bot Index components. The shares of Oceaneering International rose 8.58% on news that the company had achieved a four-year Petrobras contract. As a result, Zachs issued a favorable research report. Other companies contributing to the overperformance included NVIDIA (+11.19%), DDD (9.82%), IRBT (+14.03%), ISR 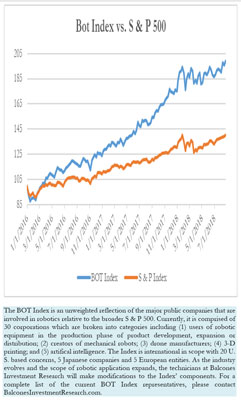 G (+3.16%), Mazor Robotics (+3.19%) and ABB (+4%). NVIDIA, Intuitive Surgical and Mazor Robotics were ‘bounce-backs’ from prior weakness. 3D Systems and IRobot, on the other hand, have been trending upward for several weeks. ABB Ltd. stock’s gain was powered by a report that it might sell its power grid business.

On the negative front were two names that have had their share of ups and downs. The week’s weakest performer was Cyberdyne that was subject to a 7.68% decline. The company has seen its stock drop nine of the past ten weeks, taking the shares from $12.10 to this week’s closing price of $7.57 Second was the stock of EKSO Bionics which dropped 7% in a bit of a pull-back from significant strength in the prior two trading periods.

This past week a new exchanged traded fund hit the market with a focus on robotic investments. The Loup Frontier Tech ETF Innovator Fund rang the opening NYSE bell on August 22, celebrating its listing on the Exchange. Two days later the bell was rung by Ark Investments to highlight its Ark Innovator ETF. Most certainly the new additions to the more established funds that are dedicated to robotic/AI/drone/3D printing reflect the interest shown by investors in the growing field.

With BOTZ and ROBO each at over $2 billion in assets under management, together with technology funds offered by the major mutual fund providers, there has been a massive amount of capital flowing into robotic companies’ stock. Since mutual funds and ETF’s are required to ‘mark to market’, virtually all their cash inflows have gone into a relatively few number of publicly traded corporations. The basics of economic theory involves the price effect caused by supply and demand. Heavy demand and a limited supply has always implied an increase in price of the goods purchased. In this case many of the public robotic companies have been the beneficiaries of the interest that the mutual funds and ETF’s have generated with the investing public.

A year or so ago one of the larger bot packaged products was subject to criticism on their investment strategies. There was concern that the fund had artificially inflated the price of a stock who corporate prospects perhaps did not justified such a high multiple. The critique was certainly unjustified as the fund’s stated objective was to use algorithms to purchase a limited number of corporations. As the fund experienced extraordinary growth in AUM, the fund inflows necessitated the continual purchase of what is a limited number of public corporations.

As you investigate the holdings of the packaged products, the same investments are included in virtually all the funds. While this situation has been a boon to the public corporations in the industry, it sets up some vulnerability, as well, should the market turn, and investors pull funds out of the bot mutual funds and ETFs. Just as the inflow of purchases of robotic companies has benefited the companies, an exact opposite scenario would unfold should funds be forced to sell.

Unfortunately, most of the pure robotic plays are in the private company arena. As many in the industry are at this stage, startups, there has been little need to be burdened by the regulations imposed in public ownership. There has been sufficient capital from hedge funds and venture capitalists to not require seeking public capital. That has left the packaged funds with only a limited number of stocks which meet their selection criteria. Hopefully, this situation should change in the future as robotics become more mainstream and the need for capital exceeds private funding. However, as we recently witnessed with Tesla and its desire to return to a privately held company, the encumbrances of public trading and oversight may supersede the need for capital.

How Does the Year Shape Up For the Bot Index Versus the Broader Market: 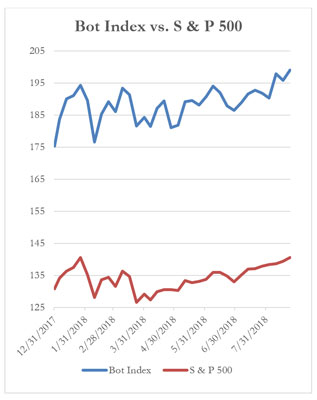 As noted in the chart, with a period of little intrinsic growth during the first part of 2018, the robotic names resumed their longer-term outperformance of the general market by almost two percentage points since the first of May. Most certainly, the bots are the beneficiaries of the interest by the mutual fund creators and their shareholders. This week’s new fund offerings bear witness to this dynamic trend.

Why 3D Print with an Industrial Robot?