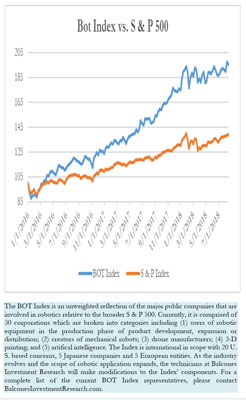 Once again, the Bot Index was adversely affected by poor market returns of several of the Asian constituents. The Index fell 1.04% while the broad domestic market rose a bit over fifty basis points for the week. Most notable of international decliners were Cyberdyne who fell 26.19%, Mazor Robotics whose poor earnings announced three weeks ago has driven the stock down from $62.27 to $44.57 (with 10.39% of that decline this week) and Hiwin Technologies whose 6.71% drop capped off five weeks of negative returns pushing the stock from $353 to the current $264. Keyence was the remaining Japanese company that produced a negative weekly result, falling almost 4%. Joining the most notable losers were NVIDIA Corp. whose spectacular earnings were overshadowed by cautious guidance regarding bit coin mining, 3D Systems who gave back 4.23% of the 54.71% gain of the prior week and Immersion Corp. who is still suffering from its reported surprise revenue decline.

Among the gainers the stellar performer for the week was IRobot. Two articles touting the stock from Zachs and Motley Fool with the respective titles – ‘Why IRobot is a Must Add Stock to Your Portfolio’ and ‘3 Growth Stocks at Deep Value Prices’ were the catalysts for the 9.56% increase. Lockheed Martin’s 3.87% jump was a result of a $1.4 billion missile contract and Ekso Bionics reported that the General Service Administration listed Ekso as a Federal Business Opportunities vendor (stock rose 3.42%). AeroVironment jumped 5.86% due to being mentioned in Jim Cramer’s Lightening Round on the 15th where he quoted, “We like AeroVironment, we think they are terrific.”

A Replacement for ReWalk Robotics:

The analysts at Balcones Investment Research have reviewed a significant number of potential companies that would serve as a suitable replacement for ReWalk Robotics. As has been mentioned in earlier Bot Brief commentaries, ReWalk’s stock price has fallen consistently below $1.00 and small price gyrations have created excessive volatility in the Bot Index. Since the Index, whose constituents’ percent performance are equally impactful, the extremely low price of ReWalk is inconsistent with the intent of the Index. The Bot Index was created to provide a ‘window’ to investor acceptance (or intolerance) of robotics as a practical investment theme.

After months of deliberations on the replacement for ReWalk, the research firm has decided on adding the newly announced NIO Inc. initial public offering. The proposed NYSE listing of the American Depository Shares is expected to bring $1.8 billion and be listed under the symbol NIO. Please do not assume that NIO is a recommendation for individual investment. It was selected as a specific solution to ensure the integrity of the Index’s commitment to robotic product specificity, to preserve international composition and ensure representation of robotic commitment. In the three years of running the Bot Index, there have been seven adjustments, most of which were a result of company buyouts.

There were several contributing factors to the selection of NIO over other companies. First, the Bot Index holds no automobile firms. The industry is so large, and robotics plays such a small role in most of the companies in automobile manufacturing, that stock prices would be impacted more by macroeconomic events rather than reflect robotic consumer acceptance. NIO, however, as a relatively new company that is dedicated to electric-powered vehicles and autonomous concept cars, presents a more focused micro vision of the industry. Secondly, the Index has limited exposure to China (the company’s stated headquarters is Shanghai and stock listing in the Caymans). With ReWalk’s headquarters in Israel, there was no public alternative Middle Eastern robotic replacement available. To maintain the mix between U.S. and International components, the China connection is appropriate. Thirdly, the Index has never included an initial public offering and the deal will carry a certain view of how investors find acceptance of this endeavor. Fourth, Tesla who is NIO’s only rival in the Chinese electric upscale market is presenting itself to go private. Just to pay back shareholders will hamper the company’s financial ability to grow and, therefore, present a lesser competitor. Fifth, while NIO’s current offerings of vehicles are all electric and require a driver, the company has an exciting prototype autonomous car, the Eve. Based upon company reports, NIO is anticipating bringing the car to the US market by 2020 and promising a range of 600 miles, with a wireless charging system that will provide 200 miles with a 10-minute charge. Finally, as an ADS offering, NIO will not be a currency play and not be pegged to a yuan/dollar differential.

As a bit of background, NIO was founded in 2014 and has approximately 6,200 employees. It introduced the EP9 in 2016 as a high end ($1.4 million) spec performance vehicle. The company parades the vehicle as a tribute to the company’s technology since it set an electric car world record of 170 mph. At the same meet in Austin, Texas’ COTA, an autonomous driving record was set by the EP9, clocked at 160 miles per hour. The company has just released its production car, the seven-seater SUV ES8 which carries the NIO Advanced Autonomous Driving System and is touted as the first in-car AI system. The price tag on the vehicle is cheaper than rival Tesla and the company has deposits for delivery of 17,000 of the model. The company will release its ES6 at the end of 2018 that is a 5-seater and targets the lower priced market.

There is a plethora of reasons to avoid the stock and are spelled out in the prospectus. However, the analysts at Balcones Investment Research feel that the company will check many of the boxes for which the Bot Index was designed and will entice risk-off investors with this new IPO.

Get ready for the robotics A-Team