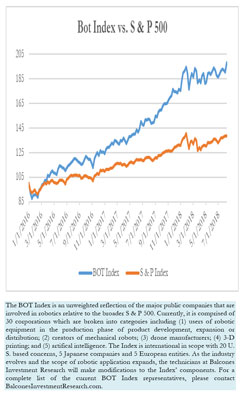 Reversing a two-week trend of market underperformance, the Bot Index gained 3.46% versus the S & P 500’s decline of a quarter of one percent. The individual stocks that make up the index were in something of a barbell performance pattern for the week. Five companies had spectacular returns while another five produced major disappointments. Of the gainers, Ekso Bionics’ stock jumped some 46.93% from $1.79 to $2.63 based upon its earnings report. In management’s narrative to shareholders it was noted that the company achieved record revenues of $3 million, a 59% YOY increase. Even more importantly, Ford has ordered additional EksoVests for worker enhancement. The trial period has apparently ended with the Ekso product fulfilling its expectations. Following Ekso’s sparkling performance was 3-D Systems’ stock which was also stimulated following its report of surprising earnings in the second quarter. With analysts anticipating a 1 cent per share earnings, the actual 6 cent earnings propelled the stock up 19.88% during the week. The company also noted it had formed a partnership with Georg Fischer Company to manufacture integrated solutions machinery. The three other stellar performers for the week included Immersion Corp. (+8.72%), AeroVironment (6.36%) and IRobot (5.82%).

The weaker names in the Index for the week included three Asian companies. The worst performer, however, was the Israeli firm Mazor Robotics who declined another 6.51% on top of the 14 ½ % drop of the prior week. The other decliners for the week included Hiwin Technologies (-6.14%), Cyberdyne Corp. (-3.89%), Yaskawa Electric (-3.89%) and Rockwell Automation (-3.47%).

So, What’s Up With Asian Bot Companies’ Underperformance?

It seems that the Bot Index has been impacted this year with rather notable weakness in several the Asian companies. Certainly, the impending trade issues are weighing heavily on some of the robotic names that are heavily into the manufacturing sector. The magnitude of some of the individual declines, however, bears notice. For example, this year, Cyberdyne has shrunk by some 35.29%, Yaskawa Corp. is off 28.06%, Omron Corp. is down 24.37%, Hiwin Technologies has retracted 12.11%, and Fanuc is off 19.13%. Hiwin’s 12% decline for the year to date is only a small part of the staggering 43.96% from its highs in April. Only Keyence Corp. has produced a barely positive rate of return. It is true that the Nikkei is down around 2+% and the S & P 500 is up only 5.34% so outstanding numbers were not to be expected. However, there is some expectation that the robotics internationally would move more in tandem. Even with the inclusion of the five notable decliners, the Bot Index has provided a 12.90% improvement over year-end figures. Clearly, without the inclusion of the Asian companies, the Bot Index would be above $200 or double its initial trading value at the end of 2015.