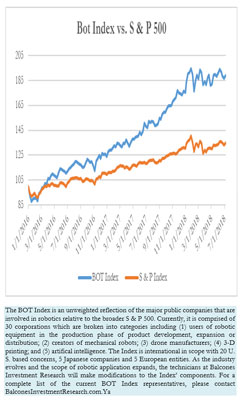 The Bot Index gained 1.21% in the first week of July but failed to match the 1.52% performance of the S & P 500. While the Bot Index contained a number of significant gainers, the Asian companies in the portfolio again constrained the robotics relative performance. Keyence Corp. fell a bit over 6% to lead the poorer stocks, while Hiwin Technologies gave back virtually all the 5.88% gain it experienced in the prior week. OMRON Corp. dropped 4% and Yaskawa Electric declined 2.58%.

On the positive end of the spectrum Ekso Bionics added 10.61% to the prior week’s 5.90% gain. Wall Street Equities published a report on Mazor Robotics, noting its strong stock track record and relative position. The stock was the Bot Index’ second best performer with a 7.84% gain. IRobot and 3D Systems each rose 6.73% as Yahoo Finance picked up a report by The Motley Fool urging investors to consider, “you can still expose yourself to disruptive technologies while benefiting from the more predictable growth that stocks provide” {by investing in IRobot} and another Yahoo Finance feature that sited a Wall Street report favoring 3D Systems. NVIDIA Corp. gained 4.40% due, in part, to an article in Benzinga that was entitled The Semiconductor Stocks That Fund Managers Love and Hate. The feature quoted Bank of America “NVDA remains our top sector pick, and ownership levels are still well below levels of some large-cap semi and tech peers.” Cognex rose 3.77% and Intuitive Surgical increased 3.55% as the FDA granted clearance for a precision stapler manipulation and placement device for use with the company’s SmartFire technology through the da Vinci surgical platform.

An Interview with Dr. Arthur Laffer: 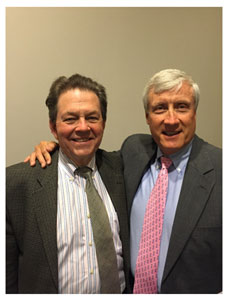 Last week Randy Bateman of the Bot Brief traveled to the Nashville home of Dr. Arthur Laffer of Laffer Associates. Dr. Laffer was on President Ronald Reagan’s Economic Advisors and is the creator of the Laffer Curve and father of ‘supply side’ economic theory. While the entire text of the interview will be included in a future Bot Brief we were compelled, this week, to discuss Dr. Laffer’s response to the ‘universal wage’ proposal that was mentioned by Sir Richard Branson on CNBC. In a headline that read, “America should give out free cash to fix income inequality” Sir Richard stated, “I think AI will result in there being less hours in the day that people are going to need to work. A lot of exciting new innovations are going to be created, which will generate a lot of opportunities and a lot of wealth, but there is a real danger it could also reduce the amount of jobs.”

We posed the same question to Dr. Laffer who countered with the historical concerns that each period of disruptive technology has led to irrational hysteria over the loss of jobs. He felt it humorous that we ask that question given the current state of extremely low unemployment and increasing labor participation rates. “Why on earth would you pay people for not working and tax people for working. The concept makes no sense.” Good economics such as low taxes and responsible regulation are the solution to most of the world’s social and financial problems. Robotics will simply make for greater levels of productivity, safety and human advancement.