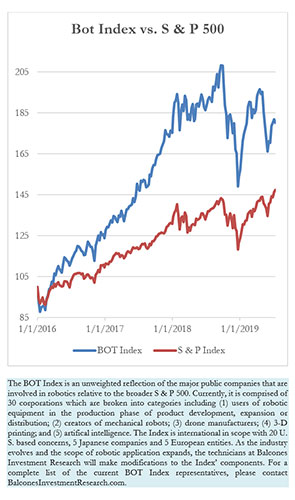 In an unusual twist, the Bot Index declined last week the exact same amount that it gained the prior week. The negative .93 contrasted with the positive .78% of the Standard and Poors 500. There was not much to cheer from the robotic names as the Chinese auto firm NIO Inc. once again led the gainers. The company gained another 5.83% on top of the prior week’s increase of nearly 28%. The advance was attributed to NIO’s reported 2nd quarter deliveries of 3,553 vehicles versus guidance that ranged between 2,800 and 3,200. The shares of NVIDIA Corp. rose 4.61% as reviews of its new gaming chips, the RTX 2060 and 2070 Super, appears to offer competitive advantages over the AMD semiconductors.

The losers within the Bot Index were centered in the Asian companies. Yaskawa Electric led the weakness with a decline of 7.15%. Keyence fell 4.51%, Fanuc declined 4.38% and OMRON Corp. wilted by 3.75%. The low priced Accuray Inc. led the domestic components with a 5.25% shrinkage.

First Half 2019 Performance Results of the Bot Index Components:

All in all it was a reasonably good first half of the year for the Bot Index. The final ending level of 180.1219 was indicative of a 2.75% gain. It was a great surprise to see Oceaneering International as the leading gainer for the period and equally surprising to have Google within the bottom ranks. The 130%  divergence from the best and worst performers for the half is a first for the Bot Index over any time frame and serves to point out the fact that not all robotic names move in tandem.